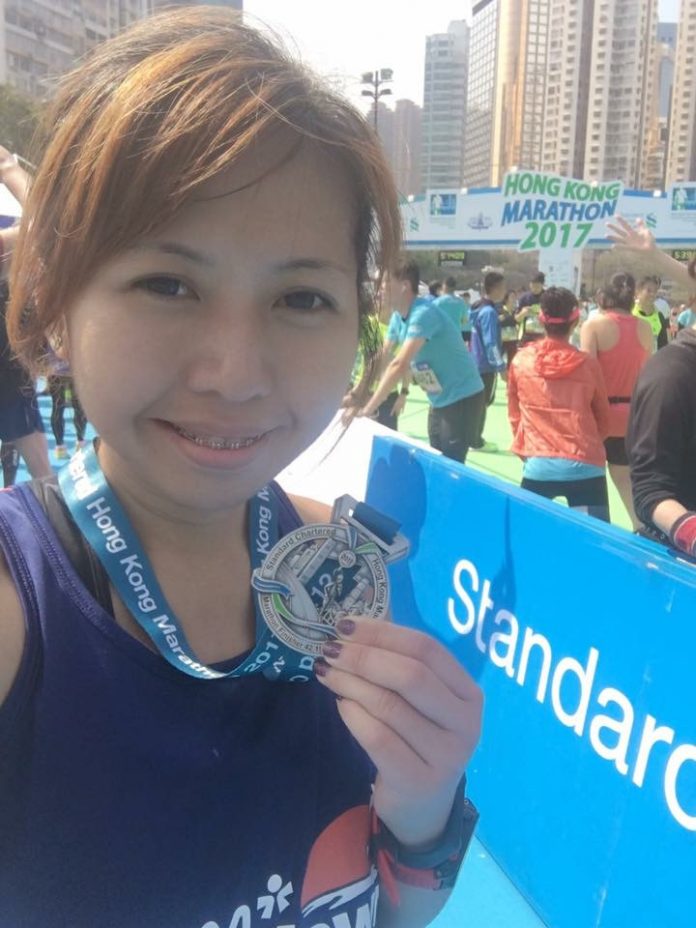 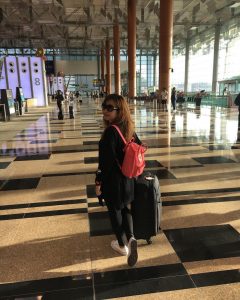 I’m going places, not as in places places, but literally I’m going places. To the land of Dim Sum! 😍 This is my first race in Hong Kong, my second overseas race, my third marathon, running a distance of 42.195km, my third time in Hong Kong and it’s my fourth Standard Chartered Marathon race.

Tried balloting for the race slot but could not get the slot and was quite disappointed but however I won the race slot through a Facebook contest! At first I only know that there is Standard Chartered Marathon in Singapore, Kuala Lumpur, Taipei and Hong Kong but there were more! Such as in Dubai, Mumbai and some other country in the Pacific Region 😍 People attempt the 7 majors maybe I can attempt the “Standard Chartered major”, attempting the Standard Chartered marathons over the world? 😆 Hurhurhur! But running a marathon is really not easy 😂

At first I was thinking to register for half marathon or full marathon? Half marathon also tough run till so shag but no medal? How can? A medal slave like me is very sad thinking that there will be no medal, but full marathon got chance to get a medal, but the cut-off-time is just 6 hours 😱 My first marathon in Standard Chartered 2015 I did 5 hours 50 mins, Sundown Marathon 2016 I did 6 hours 10 minutes so it’s very risky for me 😖 Either I run the half marathon no medal or run the full marathon to “gamble” for the medal or up the sweeper bus so I decided to take the “gamble” and aim for the medal! 😆 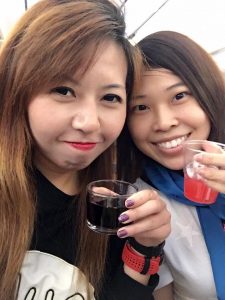 This is not an advert for Singapore Airlines 😂 but seriously I really enjoyed the flight, the seat is really comfortable! Too long never sit SQ already, like a shiok 😆 So, on Friday, 2 days before race day I traveled to Hong Kong via Singapore Airlines in the morning, enjoyed the inflight entertainment system by watching Suicide Squad and a few episodes of 2 Broke Girls while covering myself in the comfortable blanket and pillow, sipping Red Wine, Martell VSOP and some cocktail 😆 Seriously we watched to try more but it will be a long day after we touch down at Hong Kong so I better take care of myself and control. 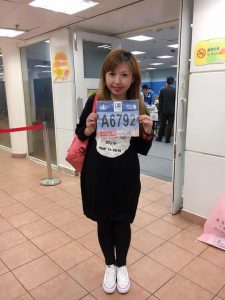 After touch down, went directly to collect race entry pack and luckily there is no queue at all as mostly the local runners collected their race pack the previous weekend. There is a major problem with the T-shirt size to many runners, that many of their local runners complained that they were “forcefully” given a bigger size T-shirt but maybe we are overseas runners so my T-shirt size no problem and I don’t really care about T-shirt because I prefer singlet.

After collecting racepack, went to Victoria Peak and the Ladies Street in Mong Kok. But I decided to go for a run, it was 11 degrees and 11.45pm. 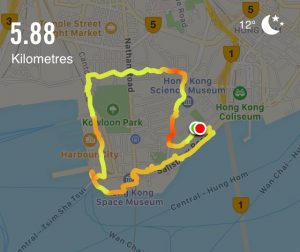 Though I’ve been to Hong Kong twice, many years ago but it’s still a unfamiliar place. But I felt that Hong Kong is a safe place so I did a 5.88km run, exploring Hong Kong at the same time. It’s cold, but maybe legs is all fats so my legs don’t feel cold but my upper body is cold 😂 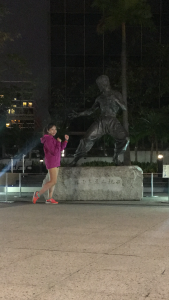 The next day was a trip of temples visiting. Went to three temples to pray, then I realised I had prayed for many things, but forgot to pray about anything related to running such as getting a PB, weather will be good, or will not get tired etc. I love to run but maybe there is more things than running. When I return to the hotel at the end of the night, I was seriously cursing myself that it was a bad idea to climb up the slopes in the last temple 😭 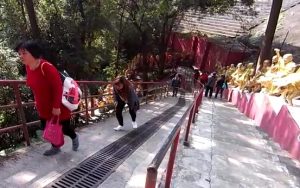 (Photo Credits: How Han) My thighs were aching! After walking about 20km, I can feel the tiredness in both my legs how am I going to do the 42km tomorrow? 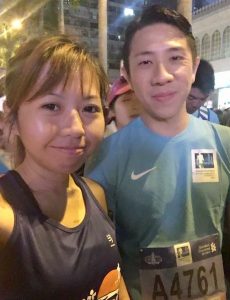 On race day I arrived at the venue, its 13 degrees. I was wearing hand gloves and a jacket but put them into bag deposit because it will be wasteful to throw it away once flag off. There’s water stations and baggage deposit is fast, no queue at all as we were given a draw string bag with a tag during the racepack collection so we just deposit anything we want in it. And the 13 degrees is still tahanable. Many runners were in those disposable rain coats and trash bags to keep warm, the big black trash bags where they cut two holes at the side for the hands and one at top for the head, good idea 😆 But I almost tripped on it 😅

After 3km from start, many guy runners just find the side of the road to pee. Very usual scene for marathons. Reminds me of Grey’s Anatomy where by a group of passionate Doctors who needs to for surgery for hours wear diapers so when they do surgery so they don’t need to go toilet 😂 Many runners were in interesting costumes such as a guy was wearing ninja costume, which I see him since the beginning of the run till the end of the run, waving a plastic samurai costume. Hard core sia 😆

The route is very scenic, we passed by tunnels and bridges but the slopes is really a killer. I really like the run, I didn’t listen to music, I didn’t stop and take photos, its like living and enjoying the moment. There were many upslopes, but it also means downslopes. Though I didn’t really do much long distance running but I really must thank the recent sloppy runs I had in Macritchie Reservoir and Peirce Reservoir. Or is it because my legs were already sore from all the climbing and walking from the previous day that I don’t feel my legs is failing me? I was quite amaze that at 21km I get my half marathon PB, 2hrs14minutes! At 32km, I did a PB too, agak about at least 30 minutes faster than my Newton Challenge timing.

Amazingly, I have not start any walking at all yet, only for a few seconds at water points. I know I’m safe, even if I start walking for the rest of the distance I won’t also be sent up to take the sweeper bus. But I’m still feeling quite strong, not very tired so I continued running. I don’t know where do I have the strength to run all these crazy slopes. Total is 900m of elevation, I don’t know what does it mean exactly but I take it as total vertical up I climbed 900m! I thought I have not done enough training but I did well for this run compared to many of my previous races long distance races. Maybe because I have a very minimal expectation for this run that is not to get “sweep”, so I have no stress and did much better than many of my races. I did really poorly for both my half marathons at GEWR and SCMS, I was hoping for PB, ends up both I feel stomach cramps, this and that, finishing in about 3 hours for both runs when I aimed for 2 hrs 20 minutes.

I must say the water points is really good! Every water point is spaced out, it streches to about 100m at least. I think there’s also banana and isotonic and distilled water at every hydration points. I don’t take gels so I didnt take any notice at all. But there is chocolates! The last few km I was enjoying the chocolates so happily and running, it’s Super Shiok and kept me occupied and it’s a good distraction so I won’t keep counting down the distance.

I was going strong and running at constant pace till 36km, I slowed down and started walking. Maybe it’s the mentality that is failing me. I start to feel something weird in my left knee. But I’m a lucky girl because other than sometimes when I run I will trip and fall and hurt myself, I don’t have any injuries like leg pain or anywhere pain. It may just be the lack of long distance run that is causing the feel on my knee. My last longest distance run after last year Sundown Marathon 2016 is Newton Run, running 32km, then a few weeks before I try to run a 30km. That’s all, I’m not hardcore enough to always run long distance. 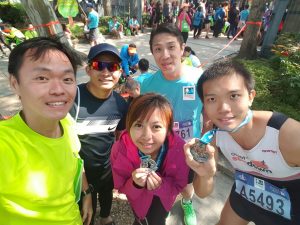 The medal is so beautiful. I thought I’m going to cry, now I wonder is it the medal that I came for? Or was it simply for the food or I just need a break from Singapore? I was just teary and touched that I did a PB and I’m about 1 hour 30 minutes faster than my Sundown marathon timing a few months back! Unofficial timing is 4 hours 42 minutes! I’m a sub 5 marathoner now! 😱 I must really thank my friends. Was thinking about them during the run. They were always so encouraging, motivating and inspiring me all this time. 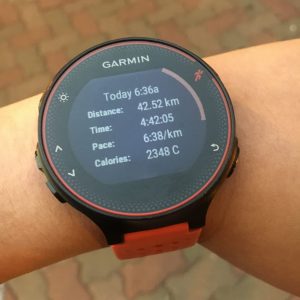 Now it’s one day after race, my leg is ok! I feel great and I don’t waddle like a penguin 😊 Heading for some sight seeing and returning home 😊