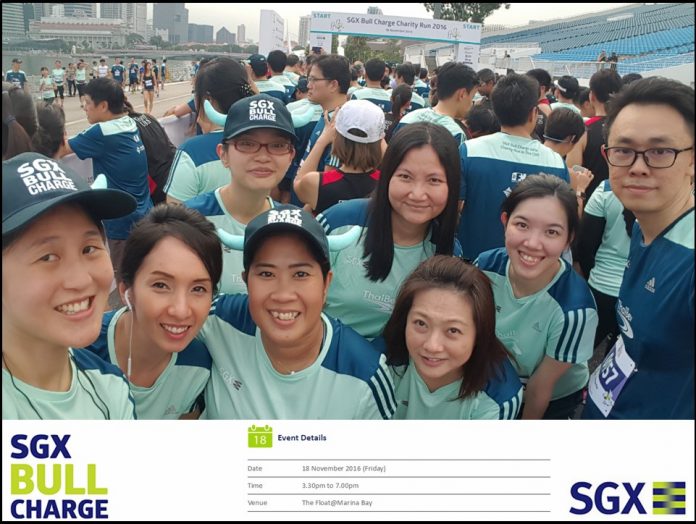 Rain rain stay away were the few words that I could ran through my mind of as the minutes drew closer to 17:00 hrs on Friday (18/11/2016) evening! The weather had been really unpredictable the past few days and my colleagues and I were unsure whether we could even make it to the SGX Bull Charge. We were checking the weather forecast sooo frequently like how we would refresh a webpage to see whether the exam result is being released already. The weather forecast didn’t look promising at all. Would this be another run event that didn’t take place just because it poured heavily?

[Tweet from @NEAsg saying that there will be passing showers]

There was a tweet from @NEAsg at 17:00 hrs saying that there would be light rain clearing in the evening, at least it’s not going to be heavy & thundery showers. I soooo hope I won’t wet my new pair of shoes! Taking the chance, my colleagues and I finally made the decision to go change into the event tees and workout gear even though we saw the dark clouds looming over the CBD area. We took a quick look out of the window and we could see that the dark clouds were slowly moving away. 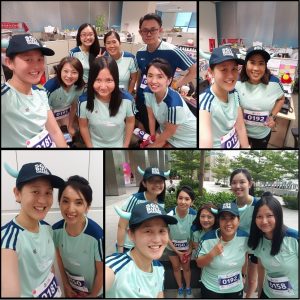 [Group photo of my colleagues and I]

We all gathered downstairs of our office building to take some group photos before heading to the event site. As we were walking to the event site, we could feel slight intermittent drizzles of rain drops. I was praying so hard that it won’t rain. All of us were excited but nervous at the same time because we didn’t want to be caught in the situation where it starts to rain and had to find for shelter. 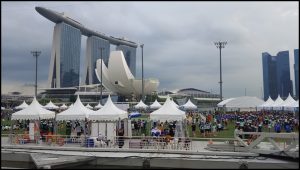 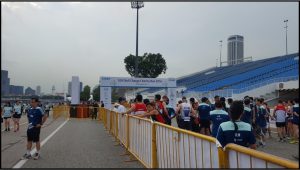 We reached the event site 30 mins before the 3 km Chief Challenge flagged off. At the at time, the START pen had just opened and made our way inside. The weather was holding up and the skies seemed clearer! We were much more optimistic that it won’t pour. Though it was still early, there were lots of activities going on at the race village which had a carnival going on. There were American style food stalls and lots of exciting games and you could see participants enjoying those activities.

Soon the call to enter the START pen was soon made by the emcee over the PA system. The participants from the race village started streaming in. Since we were already inside, we had found a comfortable spot inside and started doing some warm up stretches. Very soon, the emcess went on stage and invited the Guest of Honour, Ms Indranee Rajah to flag-off the  km Chief Challenge first. After all the participants for that category were flagged off, a short 10 mins warm up session was conducted by 3 Fitness First instructors for the 5km Mass Run participants. 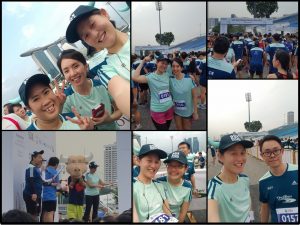 Just as the warm up was about to finish, it started to drizzle quite heavily! Luckily it was time for the 5 km Mass Run to be flagged off. As soon we could beginning I started off was a faster pace than usual. Moving helps you avoid those rain drops but it was still drizzling quite heavily up to the 1km mark then it slowly start to stop. I won’t deny I was worried when it started it drizzle but thankfully it was only passing showers. 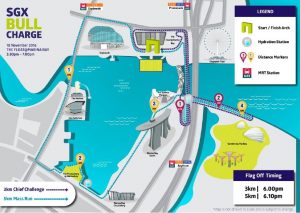 It was a really nice weather to workout as there was no heat  from the sun. At the same time, there was a cooling breeze blowing too. Being a CBD run event on a weekday during peak period, the routes were definitely narrower than those on a weekend. There was no bottlenecks but along the way but it definitely felt congested because of the cars. One thing that I didn’t like was that with weekday peak periods, the car fumes on the road were quite strong especially for the first 2 kms. Overall, the route was a pretty flat one except for the slope up the bridge at the last kilometer, the were distance marks were all placed very well, hydration stations were well manned and stocked, volunteers were enthusiastic. Though I’ve ran this route a few time, I always like it.

I finished the race with my usual timing of 35 mins. As I checked my history on my Endomondo app, I noticed that this was my fastest time clocked among all my past SGX Bull Charge past events. I’m definitely happy with my improvement. After the race, I collected my runner entitlements which included a goodie bag with the various sponsors stuff, a bottle of water and a can of 100 plus. Check out the picture below, pretty good stuff inside the bag. 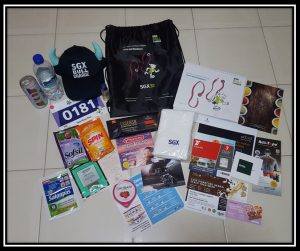 As I walked passed the race village to head to the MRT station, I could see the sponsors handing out food to the participants to enjoy! I didn’t stay to explore the race village as much as I wanted to, I had a dinner appointment which meant I had to rush off immediately. There will always be next year!

Overall, I was glad that I managed to complete the event and the rain didn’t ruin this event.Till my next race review, have an enjoyable weekend and let’s all continue our fit journey!