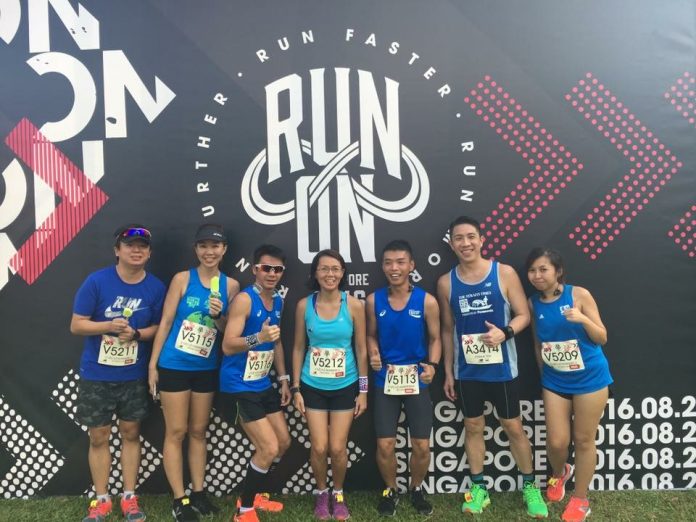 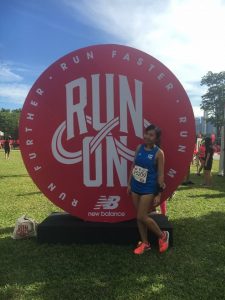 No. As of now, I will not sign up runs that flags off before 6.30pm anymore, not at the moment 😅 Because paying money to torture yourself is not worth it. But tomorrow’s Color Run flag off time is at 4pm. See how I get burnt 😭 The flag off for New Balance Run is at 5.30pm, the start pen opens at 5pm. It’s a torture, roasting ourselves under the sun to wait for the flag off. Unless the fear of Sunshine is gone, or the craziness kicks in, or the race is attractive enough to lure me to sign up again, no more race at a timing when the Sun is there to get me 50 shades darker 😭 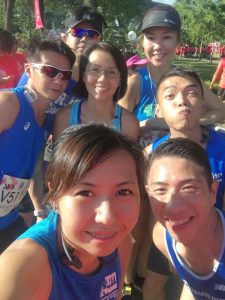 I know its unglam to be squatting down while waiting for flag off but I seriously feel so unwell to stand. Start pen shouldn’t have opened so early since they have plenty of fun things in the race village for the runners to enjoy. I was so drained and I got a little dizzy while I was in the start pen waiting for flag off. Rey says I looked pale. I was sweating, the Sun is so fierce today. I’m not fast so cannot be in the first wave so my punishment for not being fast is to be roasted under the Sun and be roasted longer 😂

Two weeks ago I just ran a half marathon and it wasn’t even as tiring as this 7km plus 1km run! 😭 While waiting for flag off I was telling myself, no I won’t be running the extra 1km just for the iron-on-badge(maybe the last 1km run should includes run for a good cause, this would makes the additional 1km more worth running). I’m already super tired before I even started running. But I saw Kelvin right ahead out of the sea of orange(our group of friends all wore blue today 😁）just shortly after I passed the finishing line, he’s going to run the additional 1km. I catch up with him and we finished the last 1km together. I will never run the additional 1km if I did not saw him, it’s really friends who keeps us going 😊 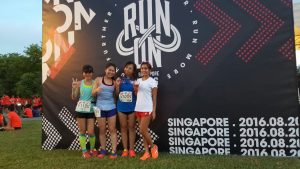 Really, why is the flag off at 5.30pm? Why is it at Gardens by the Bay east so not accessible? Venue cost will be cheaper? Although there’s shuttle bus, but still the place is not very accessible. I cab down with my friends there because I just ended pole class. I’ll be late if I take the bus or MRT and after the run, my friends and I walked to Stadium because the shuttle bus queue is crazily long 😭 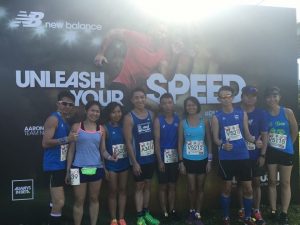 “Unleash your speed” 😅 Cannot unleash because of the “human jam” 😂 Luckily I don’t run fast because how to run fast when when there is no space to run? 😂 The flag off was in waves but how many waves were there? It felt as if after the first wave runners were flag off, then all the rest of the runners were “released” to run. I don’t really know how many waves were we flag off in but when I finally passed the start line when it’s about 5.45pm, imagine a piece of meat left under the Sun for 45minutes, it’s gonna be almost cooked 😭 I thought I will be relief to start but I was super super not happy. Pokemon Go players is catching Pokemon just steps away after the start line! OMG, it was already so congested and they were there blocking the path 😑

Signing up for runs is to have fun and enjoy but still, I got many things to complain 😂 I don’t drink coconut drink, it’s given at the hydration points and end of the run. Though some of my friends like it and says its refreshing and nice. Sadly the water is not cold at the hydration point and race village and water runs out at the race village around 7pm 😭 There’s only 1 hydration point along the route at barrage, consider it 2 because it’s to and fro but it’s at the same spot. And to consider the weather, it’s so freaking hot that two hydration point is seriously not enough with this kind of weather that makes you feel like you were in a desert 😂 No cold water some more, if got cold water it won’t be as bad actually 😔 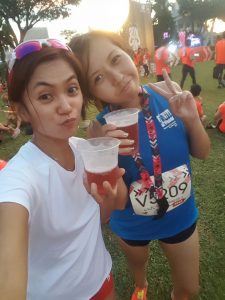 But still, there’s good things about the run. What’s best for this run is that there is FREE BEER for all runners who are 18 years old and above! Guess it’s the only carbonated drink I like! 😆 And the rose beer is really nice! 😍 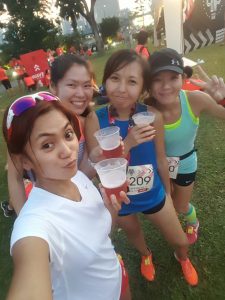 The photo booth is really nice, taking three shots then printed on a print out that moves. However seems like the printout needs a lot of time to get printed. We took the shots at around 5pm but even when before we leave the place some time after 8pm it’s still not ready yet 😂 I’ll still need to send them a selfie so they can identify my photos through email or message so they can print the print outs and mail to us. And there’s another print out of our photos on a card as sovenirs 😍 Its nice to have photos and sovenirs other than medals and bibs only to keep 😊 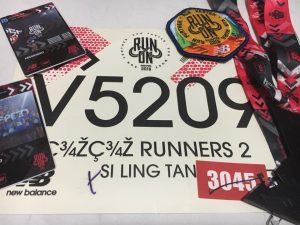 The only place with no queueing at all is baggage deposit and collection, nice! 😊 And I must really say that the race village is actually very awesome. I enjoyed the music by the DJ and the band. There’s many food like yogurt, ice cream, hot dog buns, fish balls and truffle fries 😍 But I didn’t queue for food only for the beer 😆

The race fee is not expensive compared to other race and to consider all these food and beer that is at the race village given to the runners. Though I will still need to think thrice if the flag off time of the run is still at 5.30pm next year. Hopefully next time they will organise at a better time when the Sun is not so glaring. 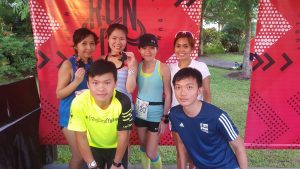 Overall, I still enjoyed today’s run! Maybe it’s because of great company of friends! And thank you July, Yi Heng and Guo Jun who’s not running to come down specially to cheer for us who are running 😊 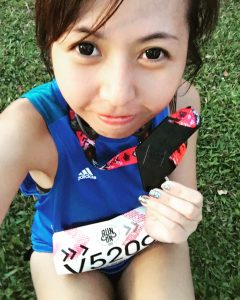