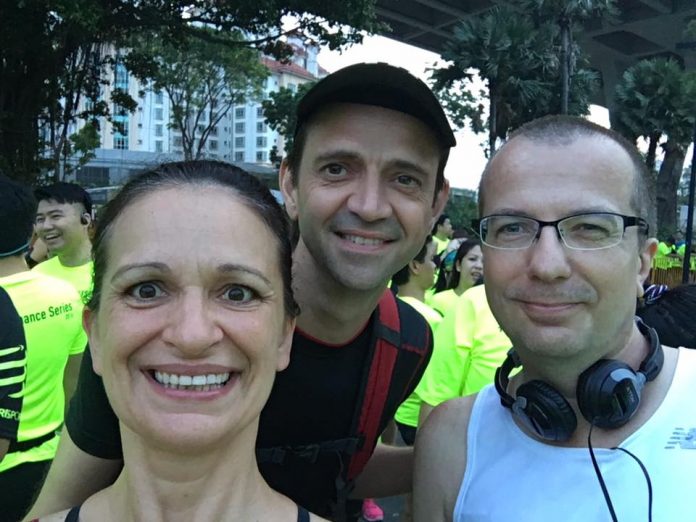 This nursery rhyme, that I used to read to my little girl when she was a toddler, just rings too true each time I complete any kind of run or race.

I am by no means a fast runner when I consider my running buddies with their sub 6/sub 5 paces, but regardless of time, pace or distance I definitely always get there in the end.

After a shocking training/racing season the first half of 2016, the last couple of months have shown consistency, improvements and better fitness.

With that in mind, the only aim I had is no matter how slow I go, that I complete the event without walking at any point. I set off in Wave 2 with my partners in pain (John and Remek) at a steady pace and aimed to maintain it throughout. The other two with stronger legs took off and left me in the dust, to be seen again at the end holding up the wall.

Carrying my own water this time, I passed all the drinking stations. They looked very well organised and set up with a table each for water and Lucozade giving runners both options throughout the whole race.

Satisfied with my steady effort as each kilometer melted away and the music continued to blare in my ears, I figured I could pick up the pace at the 9th kilometer to make up some time I wasted when I chose to stop and take a couple of pics of all the fluoro tees ascending and descending the circular frame at the Marina Barrage. They were the only pics I took en route which is a first for me given how easily I get distracted by my surroundings.

Knowing the finish line was nearby I picked up the pace from 7+ to 6:30 and hoped to take it to the end. I didn’t anticipate not seeing that finish line for some time and no matter how hard I tried, I couldn’t sustain the pace. I just kept thinking “surely I’m getting closer, I’m on the final straight, I can see Benjamin Sheares bridge so where’s the end”, and as my legs faltered, I kept hoping to see the end and it was nowhere in sight. What I thought was straight was actually a subtly curved path, keeping that most important end out of sight, till finally there in the distance, like a pinprick light at the end of a tunnel, was the most important word “Finish”.

Knowing this was my best race performance since my first 10km Great Eastern race in 2014, I was pleased I had managed to improve on my last Performance Series race at Jurong Lake by three minutes.

The progress is slow. Since my torn ligament and fractured ankle in early 2015 (terrible mishap in an obstacle race), my running has become more about showing up and doing with small incremental changes along the way.

I know speed will never be my forte but what I do foresee is long distance endurance (meaning longer than 10km). A “steady as she goes” habit for longer and longer distances will likely be my new mantra. It should be an interesting journey in itself, as endurance running needs a different mentality to speed running.

For now though, I look forward to Performance Series #4 at Bedok Reservoir in October with John and Remek. I’ve enjoyed the series so far, traipsing around Singapore, experiencing new or rarely visited locations. It’s a terrific way to explore this gorgeous city state.