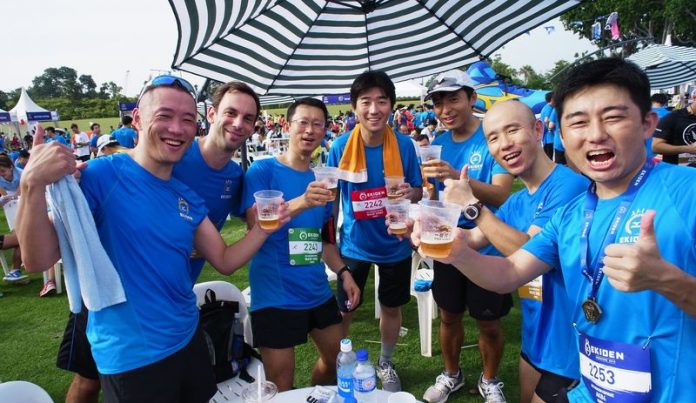 After our Unfit Runners run at City Hall area and chilling out YaKun feasting on halfboiled eggs and kaya toasts.

PES E,”Lazy girl is unable to come for run again! She says she too stressed from OT at work! We have to relook at our Mizuno Ekiden Running arrangement again!”

Mizuno Ekiden Run is a relay run for 4 people taking turns to run 5km each. The order of the run is: Big Boned Guy, Fang Tai, Lazy Girl, PES E

Big Boned Guy, “Well, nobody complained about the running arrangement during the time I registered, so it shall stay!”

PES E,” But at the rate that Lazy Girl is slacking! She will take an hour or so to finish the 5km run! I have to wait for a long time before my turn to run! How did you come up with the running order in the first place?”

Fang Tai, “I heard it has something to do with the availability of beer at the waiting area.”

PES E, “Wait! WHAT? You guys joined the Mizuno Ekiden Run because there is beer available!!??”

Big Boned Guy, “So, I arrange the running format based on how much beer each person can drink. And since you (PES E) are allergic to beer, you are the last to run since you can’t enjoy the beer anyway!”

PES E, “Well, we can reverse the order of things and you can drink your beer before your run!”

Big Boned Guy, “Do you want me to puke beer as I run! Besides, beer saps stamina and is best taken after the run!”

PES E wails, “So you guys going to sip beer and chill while I have to wait for Lazy Girl to stroll back!?”

Big Boned Guy, “Well, you can encourage Lazy Girl to turn up for our weekend runs more often…”

Fang Tai, “You can’t outvote us on the running arrangement anyway since I am with BBG on this!”

PES E, “Okie, time to tell Lazy Girl that she is getting fat from missing out on all the weekend runs! That should get her motivated!”

That is how beer manages to motivate a couple of Unfit Runners to workout and at the same time, motivate them to get other slackers to train.

Running organizers can maybe consider getting more beer sponsors in….