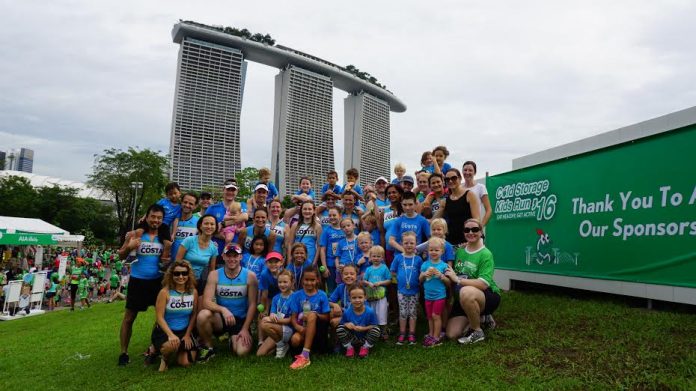 In it’s 9th year the Cold Storage run was held at Gardens by the Bay comprising of 1.6k and 800m distances, multiple age categories in both competitive and non-competitive versions. I’m fairly certain that with our turnout we participated in all but 2 categories.

Whilst the course itself was well organised, getting the kids into the starting pen was not. The start line announcer and the pen announcer were too close in proximity making the announcements difficult to understand. Parents were jostling and pushing their kids into the pens, inadvertently distressing many of the younger kids.

Much of this overcrowding was largely caused by the small space the village area was established in, making it challenging to weave through the crowds from the start to the finish line. Kinda like a square split in half with one side neat and orderly and the other side chaos.

Putting that aside, the kids however, had a ball. Many of them were in the same age category and able to run together. Some of the competitive sprinters did quite well. Justin placed 5th and Dylan 15th out of 232 in their category of 9-10 years old. Terrific effort on their part. 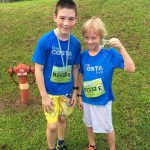 My girl on the other hand was much more interested in holding hands with her friend than running her race coming in 107/168. I guess she missed the idea that it’s “competitive”.

The finisher medal seemed a little flimsy when compared to other kids races such as the Safari Zoo, Standard Chartered or Trifactor Series. As an annual sellout event with numerous sponsors and focused on kids only, I think more consideration can be given towards the design of the medal.

With the 10th year anniversary in 2017, hopefully they’ll step-up the organisation for the crowds, a better medal and turning it into a memorable event for both kids and their parents.

We wrapped up the event with a meet-up on the grassy knoll for an epic group picture of Team Costa and their Little League members, with stunning Marina Bay Sands as a backdrop.

I’m sure we’ll be back next year for its 10th year anniversary. The crowds may have been insufferable to me as a parent but Trini had a great time. Hopefully she’ll remember to compete next time.