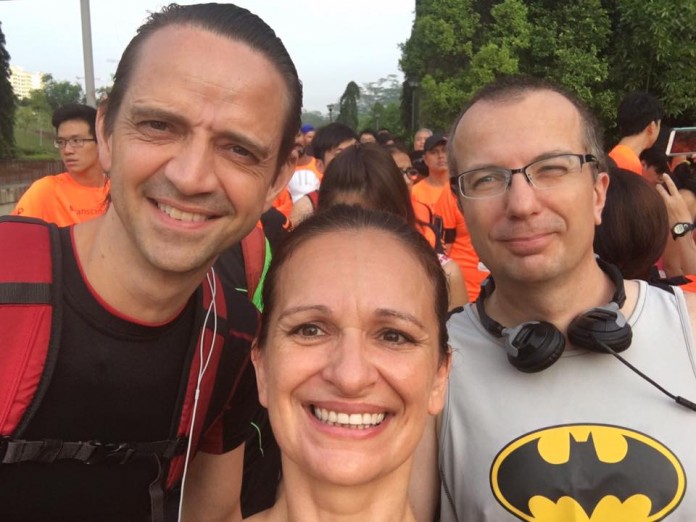 I’m sure I told my husband early this year that we’ll slow down how many races we sign up for so we can train more and be better prepared as opposed to winging it which we often seem to do. With that in mind we reached the end of April and had already participated in five races. Then the Performance Series came along with its sweetener, five races, every two months across different landscapes of Singapore. What better way to explore parts of Singapore than signing up for races in not so convenient locations. You know each time you gotta get up in the morning and catch that cab to that not so convenient location and when the race is done you can explore the area further. Without a car it is unlikely we would go to these locations otherwise.

With a curious and adventurous spirit that was enough to have me sign up for the series, then with big pleading eyes talked hubby into it. Thinking it’d be a brilliant idea to have the whole family involved, I roped my friend Remek to join us with his family. We intended for the 3 of us to do the 10km category, whilst his wife, their daughter and our daughter to race in the 5km category. Unfortunately, it was only after we registered for the first race I realised that under 13 year olds were not permitted to race. Whilst I know both girls would have loved to collect their own finisher medals, I’m pretty sure sleeping in was more valuable. They’ll just have to enjoy our collections.

Come the morning of the race and it starts like every other morning on a racing day. The alarm goes off and as we sit up in bed first things first, the questions: “why are we doing this again”, “why are we waking up before sunrise on a weekend”, “who came up with this brilliant idea”. As non-morning people, we mechanically got through the preparation, met up with Remek at the taxi stand, who’s first question was also “tell me again why we’re doing this” and hopped onto the ECP, to exit onto the PIE and off at the TPE (gotta love the acronyms in Singapore for highway names).

Following the sea of orange tees from Punggol MRT we found our way to the race village near SAFRA. Since we arrived early we figured we could make it into Wave 1 until we stood on the bridge crossing the waterway and saw the crowds of participants at least one kilometre long. Yep, we’ll just settle for Wave 2.

Reaching the Start line even in Wave 2 took at least 5min. As we headed east on the narrow path along the waterway, I farewelled my running buddies who are much faster than I am. Having experienced some terrible runs in recent weeks, I chose to settle in at an easy pace and enjoy the scenery.

Established as a farming district in its earlier history, Punggol has come a long way since. The Asian economic crisis in 1997 stalled the initial housing development of the area shelving it till 2007 when the plan was revitalised and construction began in earnest. Sungei Punggol and Sungei Serangoon were damned up to create a freshwater lake and another reservoir for Singapore. Coney Island also known as Pulau Serangoon was opened in 2015 as a natural bushland park spanning 2.4km from north to south. Running through Coney Island felt like running through the Aussie bush.

Exiting Coney Island, the running, turned into trudging, which then turned into walking. With the construction site to my left and gravel beneath my feet, I chose to enjoy the Lorong Halus Wetland to my right prior to crossing the bridge back to the Punggol Waterway.

Once I reached 7km, I started messaging with hubby at each kilometer checkpoint as a way to keep me motivated and focused on getting to the end. I stopped at the 8th kilometer drinking station for a final refresher and rest. Hubby has already finished sitting on a grassy knoll overlooking the finish line waiting for me. From here I ran and walked, swapping from one to the other as needed. I was grateful to finally see and cross the finish line at 10.9km.

Much as it was a difficult run for me, of course the heat and humidity didn’t help, I was happy the first race in the series finished and am now looking forward to the second one at Jurong Lake.