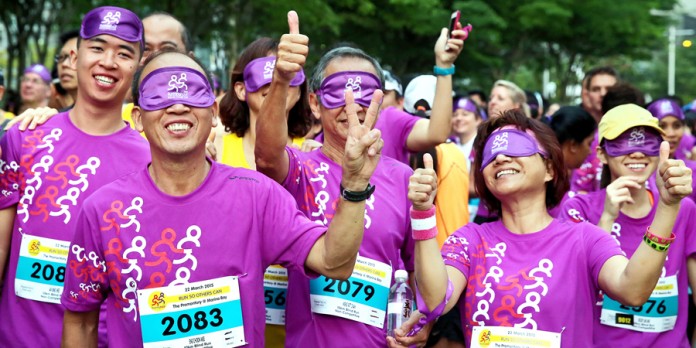 Running is one of the easiest sports and can be done almost anywhere, anytime. But to the visually and intellectually challenged, this simple exercise comes with obstacles and hindered confidence, often requiring tremendous effort to complete.

Not many of us can be confident to even walk around blind; we can imagine how difficult it is to take that first step to run without our sight.

At RunningHour 2016, you get to experience and comprehend the difficulties in running blind. You have the option to experience how running is like for someone with a visual impairment. Each participant will receive a blindfold and tether band as part of your runner entitlements. You can pair up with a friend, and take turns running ‘blind’ while your partner guides you with the tether band.

Run So Others Can

RunningHour 2016 is a national event that aims to use mainstream sports as a platform to promote integration and nurture an inclusive Singapore for the community with special needs. Runninghour is the only race in Singapore where participants run alongside other visually, intellectually and physically-challenged runners.

To change the perception of disabilities

RunningHour was formed in 2009 by John See Toh and his wife Jan Siang. They built it upon their idea: to use an accessible, affordable sport like running to create a supportive, encouraging and empowering environment for people with intellectual challenges.

Come together and show your support towards integrating people with special needs!