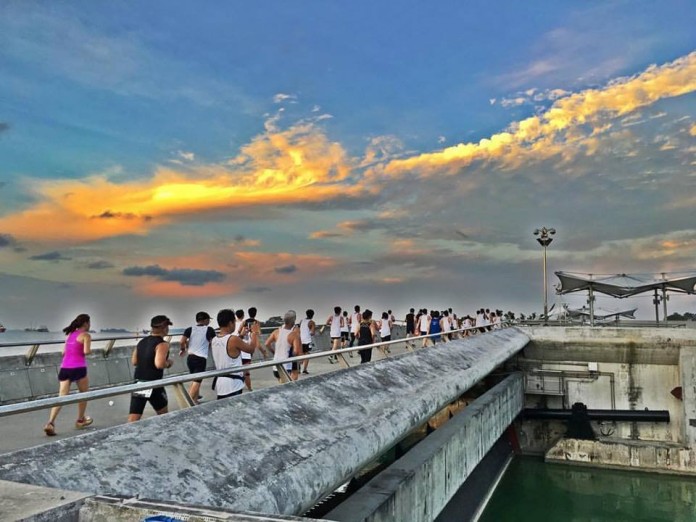 Okay, not exactly a full weekend of 2XU races but last Sunday, I witnessed one of the highest turnouts among other races in Singapore

Shot taken as I arrived at the F1 Pit Building at approximately 4.00 am (flag off will be 5.09 am for the second wave which I’m in) where baggage deposit and porta potties are located. The would be check-in and start point is approximately several hundred meters away, right behind the block.

More runners prepping for the race! It’s 4 in the morning so we should expect sunrise after race!

Within the local running community, we don’t ask who’s going for 2XU run, instead, we ask who will NOT be going. To me personally, this run is a staple in everyone’s calendar and the participation rate continues to set the bar high among other races held during the period.

More folks checking in baggages and waiting for familiar faces to be spotted!

FF, I met up with my runner friends (arranged to meet prior to the run) while wandering around and took several selfies with them.

FF again, by then, half of the runners present would have made it to the check-in and start point. I waited for a couple more of folks before walking into oblivion (the path towards the check point was almost pitch black!)

Approximately 200-300 meters away from the starting line, we enjoyed the music, emcee talking and not before long, first wave is flagged off right on dot. 9 minutes later, Roarie (myself) will be crossing the starting line to embark on his 3rd half marathon journey for the year 2016!

But but one thing that has become ceremonial to me is that I have to take some post race selfies with my friends. The sun is up and bright which makes it easier to spot people! DH and everyone else I know are there, chilling, taking photos, eating bananas!

To some, logistics issues, especially with the potta potties, seemed to be an easy target for the majority to deduct some merits off this race, oh and expired GU! To me, it is a great experience (less the gel ;( ) and an unforgettable one ( wont forget the expired gel😉 ). I envision myself to continue doing 2XU for the coming and later years!

Next race coming up will be a 10km for me! Until my next post, ciao!