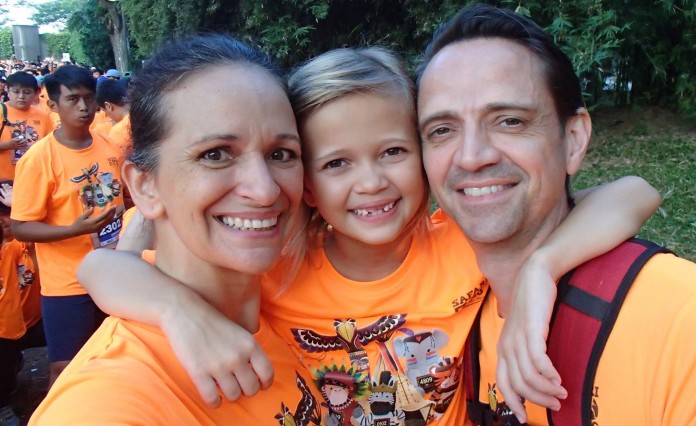 Having experienced a great deal of fun at both of these races in 2015, with a great deal of excitement on my daughter’s part, the family returned for the 2016 editions.  Here’s a quick recap:

This year the 5km route was a circuit around the Marina Bay Golf Course as opposed to last year’s 2 x 2.5km loop.  Being untimed last year we only completed one loop which was more than enough given the starting and stopping and shooting and refilling.  However, having one complete loop this time made it more interesting although more tiring especially being rained on but no less fun.

Also, this year the run was tied in with the Marina Run races as opposed to last year being an event on its own on a separate day.  The family activities that provided so much fun last year and made the event memorable were missing this year.

We had a great time because we always do whatever race we engage in with our kid but there’s not much drawback given the changes in their organisation and reduction of after race activities.  Remains to be seen whether we’ll be back for the third year.

This might have been the call of the “Wildest Tribes” but fluoro orange tees??  We were like running targets for the animals or maybe we scared the daylights out of them with the brightness of the colour.  Perhaps the reason we saw less of the nocturnal creatures this time round (besides the fact that they are nocturnal).

This year’s route was in the opposite direction to last year running through the Zoo first and then connecting to the Night Safari.

I was quite impressed with the three water station on the route.  Besides hydrating regularly they were perfect opportunities for my kid to stop and rest.

The baby giraffe distraction was Trini’s highlight, since giraffes are her favorite animals.  Mine was the majestic Asian elephant and playful orangutan youngsters hanging on the vines.

We were fascinated by the beautiful white lions restlessly prowling in their den and my favorite white tiger duo resting on a rocky outcrop in perfect view to all visitors.

Trini found the zoo hills a little hard but she always managed to summon extra energy when daddy would challenge her to a sprint to either a water station or the next KM marking.  The sprinting games gave us the motivation we needed to pick up the pace and finish 5.3km in 43 min.  An improvement of seven minutes from last year.

We were satisfied with the generous offerings of bananas and sports drinks.  The tribal inspired finisher medals were another fun design and we think we like these better than last year’s.

One element I was disappointed in was the limited goodies in the race packs.  Last year we paid $38 each and besides the tee and medal we also received a small towel in our race pack (RRP in the zoo is $10).  A useful item we still use today.  This year we paid $48 each. Besides not finding our registration at race collection time, the pack consisted of tee and a bunch of useless vouchers that just end up in the bin.  This voucher usage seems to be a common theme this year as we noted after five collected race packs thus far.

We are uncertain if we’ll join next year’s zoo race.  It’ll largely depend on the price and value of pack and perhaps my daughter’s big pleading eyes.