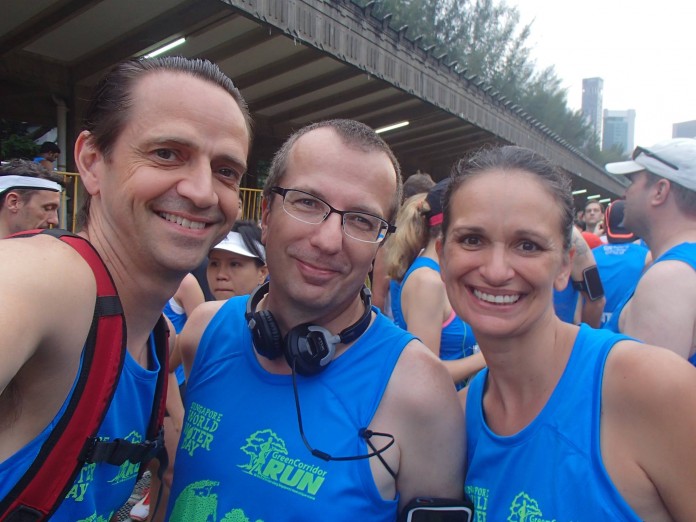 It was with a great deal of regret that I missed out on the 2015 Green Corridor race due to a fractured ankle at a race the previous week. With 2016 being the last ever Green Corridor run, I made sure I signed up early and patiently waited for this final event.  The marketing was incredible.  Every other week another photo posted, more encouragement for participants to sign up, regular reminders that it was the last event.  It was bound to finish up with a bang.

What I didn’t anticipate is coming down with a stomach bug and high fever the day before the race.  You can imagine my disappointment and my thoughts of how much bad luck could I have incurred in relation to this one event.  And then the self-talk began.  You know the mantra “mind over matter”.  I didn’t care if I had to walk the entire route, so long as I was well enough to stand up and walk it.  And walk it I did.  All of 10km.

When I woke up at 2am, barely able to stand, I was certain there was no way I’d make it to the 8am start.  Dressed in multiple layers right down to wearing socks and covered in blankets, I sweated all of that fever out of my body and when the alarm went of at 6am, I sat up and thought OK I can stand, well lets see what I can do.

Signed up for the first wave, John and I along with our friend, Remek, joined the thousands of other competitors in the pen at the historic Tanjong Pagar Railway Station.  At some point the MC announced that 11,000 runners were registered for this event.  I suspect about 40% of them were in our wave alone.

It was a perfect racing day overcast with clouds and a slight breeze.  With an 8am flag-off, I eased into a very slow jog and lasted all of 650m.  With an elevated heart rate and jelly legs, I figured the lack of food and previous day’s dehydration has made it clear that this was going to be a long walk to the end.

Once the stampede of Wave 1 runners disappeared into the distance, we had about 4km of silence on the route with occasional joggers passing by or other walkers.  It was pleasant but with my ears blocked and labouring heartbeat, it was difficult to chit-chat with my husband who I am grateful for keeping me company the whole way to the end.

Then, the Wave 2 stampede came and they just kept on coming for the next 5km.  We kept pulling to the left side to give way but still managed to be in the way of many who couldn’t figure that going around us would’ve been more appropriate than barreling between the two of us.  I suddenly realised how narrow the route is and why so many previous year’s racers complained about the congestion.  Having done 6km of this part of the Green Corridor with my Team Costa friends, I must say it was a much more pleasant affair given the space available and even good photo opportunities.  This time I figured if I have to walk, then maybe I can take a few pics but with a sea of blue tees and stampeding bodies, it didn’t draw the same appeal, so the camera remained packed away.

We just kept trudging along, knocking off one kilometer at a time and with each kilometer the pace was slowing down.  As I was walking, I swung between disappointment for not being able to run and appreciation for actually being able to get up and at least participate.  I remain in those mixed feelings.

As we reached the 9th km, I observed a teenage kid being cared for by family, struggling to breathe and the first aid team coming to help and all I could think of is how bummed she would feel that she was 1km away from the finish line and she couldn’t complete it.  I thought chances are if that was me, I would drag myself by my teeth if I had to, to get to the end.

With the end in sight, I said to hubby let’s make it feel worthwhile and jog to the end.  It was a mere 200m but it felt like 2km.  As soon as I crossed the finish line I hunched over trying to settle my heart rate and rebalance my breathing.  With the excitement over, we hydrated, topped ourselves up with bananas and apples, checked out the old railway bridge and started making our way home.

Whilst the race pack only consisted of a tee, we were pleasantly surprised with the mini towel received at the end.  The finisher medal design with an image of the Green Corridor captures the ruggedness of this place and perhaps the last time we will see it this way again. It is a nice commemorative medal.  I was also very grateful for the three water stations along the route.  Given my dehydration, I kept topping up with a couple of cups at each water station and I was even more grateful for the cold bottle of water at the end of the race.

A nicely organised event, I am thankful I made it, regardless of how I completed the race. I may not be happy about not being able to run it but I know I will never regret not having done it.

With the impending long-term closure of the Green Corridor, we still have the opportunity to take our daughter to Bukit Timah Railway Station and explore it along with the old railway bridge.  For any other nostalgic person, I would recommend that if you haven’t explored this area, do so now before it completely disappears.