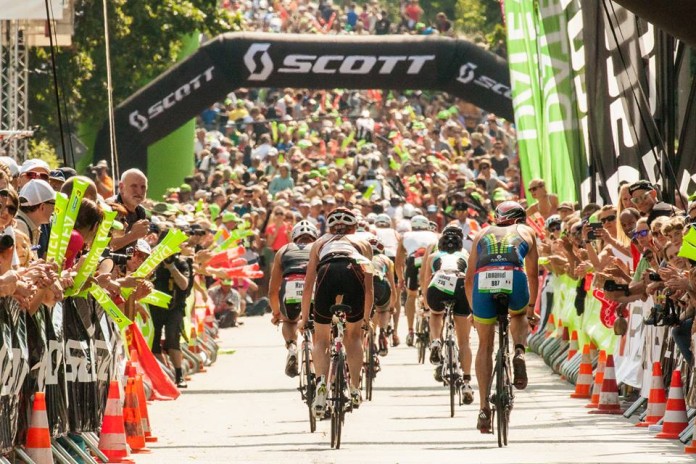 Incorporating the iconic Busselton Jetty, IRONMAN Western Australia is renowned worldwide for being the place to go for a personal best, with the bike and run courses amongst the flattest on the global IRONMAN circuit. The course comprises of a 3.8 km swim around the iconic Busselton Jetty, 180 km ride through the outskirts of Tuart Forest National Park , and 42.2 km run along the shores of Geographe Bay.

Since its debut on the Australian calendar in 2004 the IRONMAN event has seen tremendous growth, both in size and reputation among the triathlon community, and widely recognised globally as a world class sporting event. The event has become enormously popular with athletes and spectators alike and is renowned as a spectacular destination race and holiday venue.

A total of 2,500 triathletes gather from over 45 countries, including former world champions and rising stars of the sport. The event boasts of the one biggest and most complete triathlon expo to date. It is also the Asia-Pacific Championship race for the Ironman 70.3 races. In fact, local celebrities, actors and actresses, local politicians are avid supporters of this race, making it THE biggest and brightest race in Asia.

“It is very Kona-esk. If you want to race Kona, do this race – the heat, the wind, the atmosphere the crowd.  This race is the jewel of the crown here in Asia.” – Geoff Meyer, CEO, World Triathlon Corporation for Asia Pacific

An IRONMAN 70.3 covers half the distance of each segment of a typical triathlon race. The swim leg starts at the beautiful Shangri-la Mactan Beach – with crystal clear water. The bike traverses four cities forming an M-Loop, showcasing urban Cebu.  Here you will experience the famous headwind of the Cobra Ironman 70.3 Cebu! The run is along the roads of Punta Enngano, lined up by 100,000 townsfolk cheering every participant.

Since the mid 1980s Roth and triathlon have become as inseparably linked like Munich and its Oktoberfest. DATEV Challenge Roth is without doubt the “heart of the triathlon” and attracts not only the biggest names in the sport but also 5,000 athletes from 60 nations and 180,000 spectators making it the largest long- distance triathlon event in the world.

Roth is renowned for its thousands of enthusiastic spectators lining the course with hotspots such as the Beer Mile and the famous Solar Hill where athletes can hear the crowd before they see them. Up to 30,000 people line this famous hill – you can’t see the road for the people but as each cyclist approaches, the crowds separate like the parting of the Red Sea and the athletes are carried up the hill on the noise alone!

The first Isklar Norseman Xtreme Triathlon began fourteen years ago and has carved  its own category in international triathlon as an extreme triathlon race. Norseman has remained true to its core ever since, and continues to attract triathletes from around the world to the ultimate test of endurance, grit, sportsmanship and friendly competition through some of Norway’s most amazing landscapes.

The Norseman Xtreme Triathlon is also an “unsupported” race, where competitors need to have personal back up crews that follow them with cars to provide them with food and drinks. This is especially crucial because of the inherent dangers of being highly fatigued on a mountain. The course comprises of a 3.8 km swim in the Hardangerfjord, a 180 km ride to Austbygde at Lake Tinnsjøen, and a 42.2 km run to the top of Mt. Gaustatoppen.

The swim legs starts on the beach between the Dusit Thani Phuket and Outrigger Laguna Beach Resort, the bike course takes athletes onto a unique tour of the northern part of Phuket, ending off with the run through which finishes at the Laguna Grove.

Looking for the best races around the world?

Our database has
7218
listed events.
Get tickets