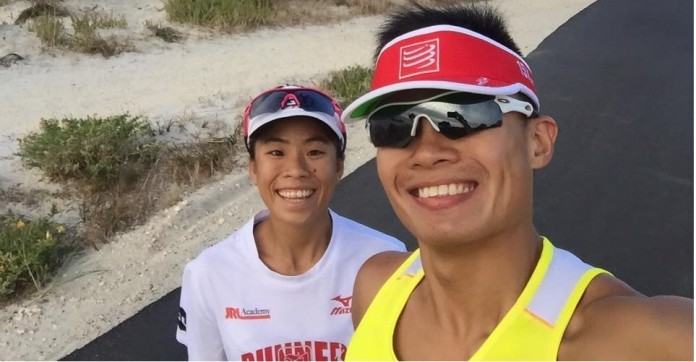 Crossing the 1st Ironman finishing line cannot be more meaningful and memorable than doing it with your loved one. Alan and Ginni, training/racing buddies/husband-and-wife, recently completed their first Ironman race together at Busselton, Western Australia. They believe that “The sport of running and triathlon completes their lives” and “Together, they are stronger”.

JustRunLah!: How would you introduce yourself to Singapore triathlon community?

Ginni: Hi, I’m Ginni and I’m vertically challenged at 1.5m tall. You will always see me racing with my husband, Alan.
Alan: My name is Alan. Yes, most in the community would usually see the both of us race together.

JustRunLah!: When did you first pick up triathlon (what age) and what inspired you to do so? And even to go for your first Ironman race?

Ginni: I first picked up Triathlon in 2008 when I was 19. Alan was overseas in Australia back then and I wanted to do something and make him proud. So, I took a leap of faith and signed up for the mini distance in OSIM Triathlon and completed it on my own. We subsequently signed up for longer distance triathlon races, from the Mini category, Sprint, Standard (Olympic), Ironman 70.3 to our first-ever full Ironman. It was a great journey for both of us, and how we have come so far in this sport.

Alan: She (Ginni) was the reason I took up first triathlon, and that was when I returned to Singapore in 2010. At that point in time, our minds were only on completing mini/sprint triathlon events in Singapore. We did not even think about the endurance triathlon races outside of Singapore. The more local races we took part, the more like-minded triathletes we got to know, and it was eventually in 2014 where we signed up for our first-ever Ironman 70.3 race in Putrajaya, Malaysia. The relatively-low registration cost and the proximity to Singapore were the main factors for the Putrajaya race. And of course, the thought to ever complete a first Ironman 70.3 race. By the end of 2014, we sat down together with our triathlon buddies, Arthur, Elaine and Gary to decide which races we could participate in 2015. Then we targeted on completing our first-ever Ironman race in Busselton, Western Australia come December 2015. But we would at least need a lead-up Ironman 70.3 race, and we signed up for Ironman 70.3 in Danang, Vietnam in May 2015.

JustRunLah!: Both of you finished your first Ironman race side by side with a time of 13hr 11min. What were going through your minds throughout the race and all the way to the finishing point?

Ginni: Due to the course design, we managed to see each other u-turn points and we are about 5mins apart. So at the 2nd loop of the run, I asked him if we want to finish the race together. We finished our first 70.3 together back at Putrajaya 2 years ago and thought it would be great to have it ‘repeated’ for our first Ironman race. My motivation is getting through the aid stations. I told myself that I am only allowed to walk during the aid-station. Moreover, I didn’t want Alan to wait for me too long in the cold either.

Alan: To be honest, I targeted to complete this race in about 12hr 30min. I did not have a good race. I wasted a lot of time visiting the portable loo (at least four times) during the bike and run legs. On the swim, we had completed in about the same timing as I realised she ran pass me when I had came out from the poo. That was prior to transit to our bike leg. So we had the chance to start the bike leg together. I heard her saying, “You go first, good luck!” And luck indeed was not on my side, at least. I had to use the loo only about 67km into the bike leg. I could remember the chill was already biting me – something which was draining me physically. I realised I was still ahead of her at that point in time. It was only after my second loo visit when she was closing in on me. It was a huge relief when I completed the bike leg, and got onto the run. At least it was my most confident leg of the race. I started with a comfortable steady pace of about 4:56, only to be hit again by the chills. That was when I slowed down during my run leg (including two other loo visits), and I saw her closing in (probably about 5 to 7 mins behind). Like Ginni said, the course design of the run leg was great! I was able to spot her throughout the run, and I had signaled to her during the earlier part of the run that I was not feeling well. She then told me to hang on to complete the race together. That thought was running through my mind, and certainly a dream come true for us with the photo-finish, despite the setbacks.

JustRunLah!: What advice would you give to someone taking that Ironman race?

Ginni: The bike is longest part of the race hence it is important to have clocked at least a few long rides of about 160km. It gives you a mental preparation.

Alan: He or she needs to be prepared to race from sunrise to sunset. At least put in a lot of training hours to be mentally prepared. Swim long, bike long, and run long. He or she needs to understand his or her most comfortable pace to last a full Ironman race.

Ginni: I told myself that I can’t give up so fast after all the efforts I put into training. And I didn’t want to disappoint the people around me.

Alan: To never give up till the finish line. I always believe in finishing any races strong.

JustRunLah!: How has training with JRL Academy’s F1 Runners been for you?

Ginni: Training has been great so far with all the different types of training session by Lexxus so I get to improve my running. It’s tough trying to juggle 3 sports and work together so I try to go for training as much as possible.

Alan: Coach Lexxus had put us through different training programmes since we are focused on completing our first-ever Ironman race. There was more emphasis on endurance and strength training, as well as several speed workouts to help better our run timings.

JustRunLah!: Now that both of you are also part of the JRL Academy’s Team bodyFUEL, how are you looking forward to be training under 2 of Singapore’s best coaches Lexxus Tan and Steven Chan?

Ginni: I look forward to more targeted training and definitely hope to be faster and more PBs!

Alan: Yes, hopefully more PBs, and to continue to enjoy the sport of running and triathlon under their tutelage.

JustRunLah!: What are your future goals, in running and in triathlon?

Ginni: I hope to be able to qualify for 70.3 World Championship and maybe getting Top 10 positions in running events.

Alan: I hope to be able to continue enjoying the sport of running and triathlon, and hopefully a breakthrough for triathlon, in terms of podium finish.

Ginni: I guess it is a passion for the sport. The daily training sessions then ‘turned’ into a habit, and part of our lives.

Alan: Yes, interest in the sport of running and triathlon keeps us going. Furthermore, working out together is as good as a movie date for us.

JustRunLah!: Finish these sentences:
– Running is…
– Triathlon is…

Ginni & Alan: Running is love. Triathlon is tough love. The sport of running and triathlon completes our lives. Together, we are stronger.