Joanne Mak (40), a mother of two, fulfilled her schoolgirl dream of doing an Ironman race recently at Western Australia. She started triathlon only 2 years ago.

JustRunLah!: How would you introduce yourself to Singapore triathlon community?

Joanne: A mother-of-two who started triathlon at the ripe old age of 38 and who went on to fulfill her schoolgirl dream of doing a full Ironman Triathlon at 40.

JustRunLah!: When did you first pick up triathlon (what age) and what inspired you to do so? And even to go for your first Ironman race?

Joanne: I did my 1st triathlon at 38 just 2 years ago as it has been my dream since I was 19. I remember watching Ironman and Eco Challenge on ESPN as a schoolgirl and being moved and inspired by the determination shown by these endurance and adventure racers. I wish I could have taken up triathlon when I was younger but I knew no friends who did triathlon then (the local triathlon scene was not very big in the early 1990s) and did not dare to ride on the roads on my own.

I only picked up cycling when I got injured with plantar fasciitis in my left foot in 2012 and was advised to lay off from running. By then I knew a colleague who was an experienced Ironman and with his guidance, I bought my first bicycle and picked up cycling to replace running and did my first Olympic Distance and 70.3 triathlon in 2013.

The Ironman Triathlon has always been my ultimate dream and goal. After I finished Tokyo Marathon this year without walking despite my ITB injury flaring up from 25km, I decided to take the plunge and registered for the Ironman to fulfill my 21-year dream as well as to mark my 4th decade significantly. 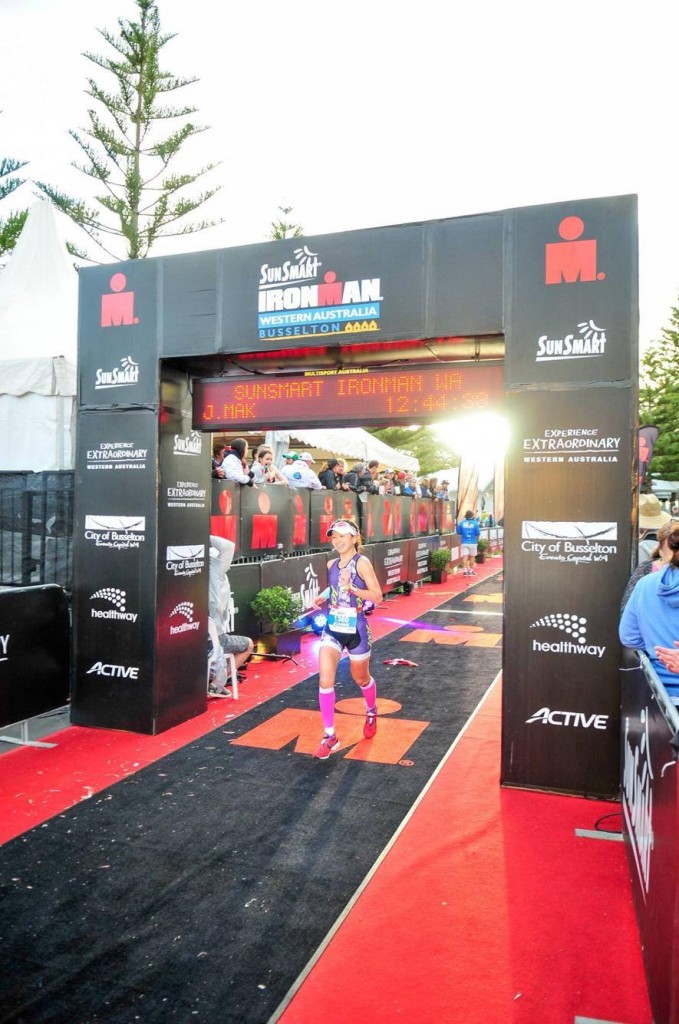 JustRunLah!: You completed your first Ironman race with an impressive 12hr 44min. What was going through your mind throughout the race and all the way to the finishing point?

Joanne: Honestly, I did not feel confident about this race because I lacked mileage for the swim and run as I have been injured with plantar fasciitis on my right foot since mid May. I was also having sore throat and running nose a few days before I departed for Western Australia. I’m the sort who never feels I have prepared enough for a race.

Swim
The swim was tough and the test swim 2 days before race day would never have prepared us for the race day conditions where the sea was choppy and waves were high. I took forever at the U-turn point and return 1.9km back to shore! In fact I started feeling nauseous and my only wish was to finish the swim, even though I knew that I would be off my target time of under 1hr 30min for the swim. When I finally reached the shore, I walked instead of jogged to transition to walk the nausea off. It was quite demoralising to see that 80% or so of the bikes were gone and I was among the bottom 20% left.

Bike
I was afraid of the bike leg as I got blown off the road during my test ride on Friday. My plan was to go steady and I did, but at a slower than planned pace due to the crosswinds and headwind. The crosswinds were scary and I gripped my aerobars for dear life and told myself to pedal harder and get out of the open area. However, I lost control of my bike due to the winds near the 90km mark and hit the left side of my head pretty hard as well as scraped my left elbow, thigh and knees. The fall caused my chain to drop as well as my brakes to rub against my front wheel but after adjusting, the bike was good to go. As I picked myself up and carried on, supporters on both sides of the road who witnessed my crash applauded…lol 😉

Due to the knock on my head, I felt discomfort opening my mouth to even drink from my bottle and even now, 1 week after the race, I cannot open my mouth too big to even brush my teeth properly as the left side of my face is swollen and I look like I have blue-grey eye shadow on the side of my left eye!

The second loop was even tougher than the first loop as fatigue set in and my aim was just to finish the bike and head in to T2. By the time I got into T2, I could see that MAJORITY of the bikes were back…& thought I was way off target.

Run
I started the run feeling good as there were so many supporters at the start of the run route. However, after going at 5:25min/km pace for the first 6km, I decided to slow down to 6min/km pace as I did not think I could sustain 5:30min/km pace over 42km, especially when I did not clock enough mileage for my run due to my PF injury. Alas, cramps set in my quads and my ITB flared up from the 25km mark. I stopped at the water stations asking for cold spray/deep heat but the volunteers did not have any or only had BUG spray! Thus, I was suffering for the last 17km and my pace slowed down drastically. When I finally collected my last rubber band, adrenaline just led me to step up my pace and sprint to the finish which was about 200m away. I was elated to be able to finish under 13 hours as I thought I did a bad swim and bike.

JustRunLah!: What advice would you give to someone taking that Ironman race, especially as a mother of 2 young kids with a full time job?

Joanne: YOLO and live a full life without regrets. I finally took the big step of doing the Ironman when my children are older (10 and 12 years old) and are more independent. There will be sacrifices to be made but I am glad that my daughters are still close to me despite being seen as the absent and neglectful mother by my parents and husband.

Joanne: Just keep going. When my ITB flared up at 25km at Tokyo Marathon this February and at Ironman Western Australia, I told myself that I didn’t fly all the way to Tokyo and Western Australia just to walk the race. And I better finish the race otherwise all the sacrifices (& displeasure incurred) would be in vain. I was also singing Rachel Platten’s “Fightsong” in my head during the bike leg for IMWA to keep myself going. ;P. 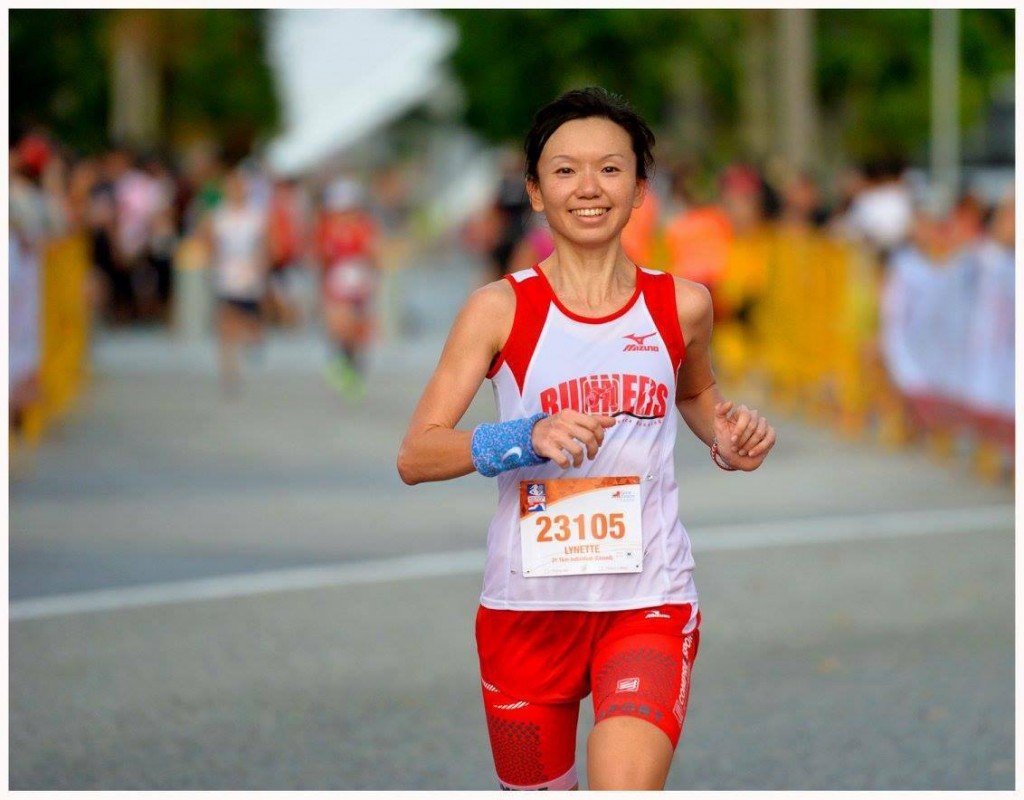 JustRunLah!: How has training with JRL Academy’s F1 Runners been for you?

Joanne: It has definitely been beneficial to me! I’m already middle-aged at 40 and yet, I managed a personal best for 5km (I’m no sprinter & despite riding 84km the day before) at the Venus Run this year. I owe my improvement to Lexxus, who’s always pushing me and for his belief in me.

JustRunLah!: Now that you are also part of the JRL Academy’s Team bodyFUEL, how are you looking forward to be training under 2 of Singapore’s best coaches Lexxus Tan and Steven Chan?

Joanne: I definitely look forward to seeing improvement in my run and triathlon times.

JustRunLah!: What are your future goals, in running and in triathlon?

Joanne: I just hope to get new personal bests, despite an ageing and injury-prone body in the following years, till my “window” closes and I have no choice but to retire from sports.

Joanne: I think in any sport, if you want to do it well especially, you have to be committed to your sport and be disciplined in your training to achieve your target. After I got to know a few really hardcore folks from August this year who ride EVERYDAY, I got more motivated to ride because they not just made me feel like a slacker in comparison, but also were good company to ride with. :).

It is also easier if exercise is already a part of your lifestyle and forms part of your daily routine. In my case, it is and it helps to have good company to ride, run and race with.

JustRunLah!: Finish this sentence: Triathlon is…

Joanne: my passion and part of my life. Triathlon has taken me to new countries, enabled me to gain new experiences, established new friendship and led me to keep growing and learning.