I ran my one and only SCMS 10km race in 2014.  After a long week away in Boracay to celebrate a friend’s 40th I returned to Singapore with only a few days spare before the race.  Needless to say, after a seriously good trip with far too much partying, I was ill-prepared for the race.  Whilst I stumbled my way through it to finish perhaps what stood out the most is how enormous this annual international event was and perhaps a little too big for someone like me who doesn’t particularly like large crowds at the best of time.

To garner something like 50,000 participants is an enormous feat for such a small city-state like Singapore.  Yet, it shows it’s popularity with athletes gathering from around the world for this one day.  Perhaps one of the wisest moves by the organizers was to split the three major categories into separate routes, starting at different points to funnel in together at the Padang as the finish line.

This year, they even moved the kids dash to another day and completely different venue.  Given the difficulties many participants had in previous years with getting their kids to the start line and then making it to the finish line in time to collect them, this was a particularly good move.

Whilst this year I did not participate, I was never too far away from the SCMS app, remotely checking in on my Team Costa friends who were registered.  It was just as exciting tracking their progress remotely in the comfort of my home with coffee or two in hand.  Our Team Costa FB group was constantly alerting with progress and checkpoints crossed.

We had 5 members representing Team Costa and each category was covered. New personal bests were achieved, marathons completed and the blazing sun conquered.

Here’s a quick recap on each participant:

Although no stranger to racing in the UK, this is the first marathon he has ever completed.  Hindered by a knee injury that occurred at 30km, perhaps his quote “that was awful, never again!!” may ring true but then again somewhere in the deep recesses of his mind, he may feel the desire to conquer it one day.  Lessons are always learnt from our worst experiences.  Quite often we are curious enough to see if we can overcome our challenges.

Certainly there was no shortage of training to prepare but unfortunately, marathon training takes months to accomplish and busy schedules and the never-ending haze had a lot to answer for.

As his body is still healing and physio will indeed be a necessity for the knee, I’m certain we haven’t seen the last of Ian on the racing circuit.

Ah what better way to knock off an item from the bucket list whilst celebrating her 40th year.  Well that’s what Avni did.  If you were to ask her about it, she’ll freely admit that it was the craziest thing she’s done so far.  Unprepared and untrained she forged through the 42.2km and the blazing sun.

Joined by her hubby and kids just in time to down a good dose of coconut juice, I understand it’s the cleanest form of electrolyte intake, for a much needed energy spike.

One of Avni’s observations during the race was starting out too hard and using up the reserves too quickly.  It is probably one of the most difficult aspects of racing different categories. Figuring out the pace needed and when to push to either race for time or race for distance.  Underestimating either could mean not enough reserves for long distance or not enough speed to make good time in a short/mid distance race.  Will Avni be back? 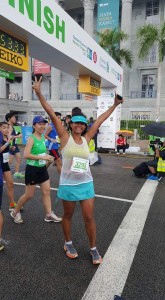 Coming in the 11th percentile in the overall category is no small feat but reaching that position by overtaking just under 500 participants in the last 5km indicates how much he still had left in him, regardless off the relentless sun beating down on him across the Western Coast Hwy.  I wonder, David, will we see you at the Sundown Marathon tackling the half-marathon as a night race perhaps? 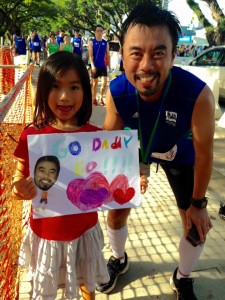 Reasonably new to running, he’s progressed to half-marathon fairly quickly undertaking the first one at the Sundown Marathon.  Training predominantly at night, Remek admits he was not prepared for the blazing sun on the freeway. Being witness to numerous participants suffering from heatstroke, Remek wisely chose to swallow his pride and slow his pace until he exited the freeway and entered the shady areas of the city.

In his own words regarding the finisher medal “I may not have won it, but I sure earned it”.

Although he may have questioned himself at the end wondering why he’s doing this to himself, I’ve no doubt he’ll do it again and most likely will see him at Sundown Marathon. 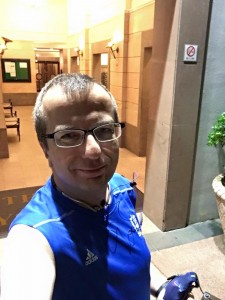 For some time there was a tongue-in-cheek joke about the 4min man.  We kind of knew this bloke, known as Steve, or at least about his running feats.  When most of us were satisfied to run at an average pace of 5 or 6, there’s this guy who runs at 4.  Eventually we got to know him better and swiftly inducted him into Team Costa’s group.

Focusing on improving his physical conditioning with the help of personal trainers, Steve barreled through the 4min pace to finish the 10km category in 37:33min at a pace of 3:45, placing him 4th in his age category and 14th overall out of 14,228 participants.

I guess we’ll need to find a new more apt nickname for him.  A terrific way to finish the year with a new goal post set for 2016. We’ll be watching you Steve.

I may not have participated or been present but following these guys on the SCMS app was just as good as being there.  We finished off the afternoon, with a BBQ gathering to celebrate David’s birthday (his lovely wife as the chef), have a race debrief and cheer with beer.