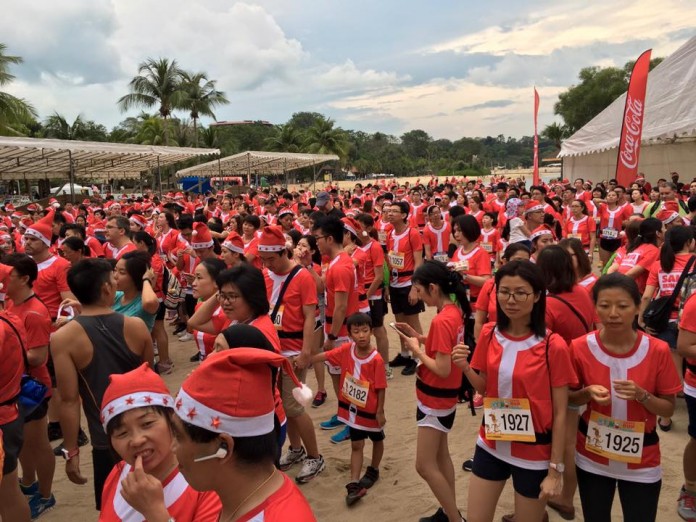 When I first looked at the $70 price tag for this race, I just went whoaaaa, why so much?  Sometimes it pays to look a little deeper and read the fine print.

Returning for the second year in a row, Santa Run for Wishes is a fundraising race for the Make a Wish Foundation which grants wishes to life-threatening medically ill children.  Started in Singapore in 2003, it has thus far granted 1000+ wishes making a lot of children smile.  Even more wonderful is that all proceeds will be matched dollar-for-dollar by the Singapore Government as part of the Care and Share Movement.

This year, Make a Wish Foundation in collaboration with Universal Studios have brought a little extra pizzazz to the racing event.  Following the race, all registered participants were provided with exclusive access to Universal for an evening of fast rides and even faster waiting lines.

Well that was enough to seal-the-deal for my family.  Have a race on Sentosa followed by thrilling rides and inadvertently give to a charity through our participation.  On top of that we were able to donate a number of books during the race pack pick-up.

Now onto race day. My understanding is that last year’s event was held around the Marina Bay area, so this year perhaps due to the collaboration with Universal, the race was held on Sentosa.

With 2km and 5km categories, the event commenced at Angsana Beach heading due west.  With both categories flagging-off at the same time, it was quite a tight squeeze funnelling through the start line and the first kilometre.  As we reached the turning point at the west end of the island the race felt more like an obstacle course rather than a race course.  Unfortunately with both categories racing at the same time there was a lot of weaving through the crowds on narrow lanes.  We basically gave up on racing and just chose to chill out and wait until the 2km category finished.

Somehow though the 2km category didn’t finish until it reached around 3.4km which made me wonder how long was the 5km category.  At this point we were quite dehydrated and still a fair way from the organised water point.  John veered off the route to stop at 7-11 to buy drinks whilst Trini and I kept going.  The water station was at 4.4km at the east end of the island’s turning point.

By this stage Trini was trudging and she kept asking how much longer.  Honestly, once we crossed 5km on my Suunto watch, I had no idea what to tell her since I knew we were still a fair way from the finish line.  So we started playing a game using landmarks to run between followed by walking and repeat.  The running distances were short but it kept her motivated to push through the last part of the route.  By the time we reached the finish line we had covered 6.3km.  Slightly longer than had expected.

However, the ice cream, electrolyte drink, finisher medal and the upcoming Universal visit made for very quick fatigue recovery.  There was a little disappointment for my girl when the finisher medal’s paint peeled off as it dried itself onto the ribbon.  Promising to fix it with some white paint at home was enough to turn her frown up-side-down.  I suspect the medals were packed before they were fully dried as each one of our medals had the white paint peel off when we detached the ribbon from where it dried.  Not sure if this was a common problem or just bad luck on our part.

Along with our friends, we made our way to Universal Studio’s and thoroughly enjoyed having the park mostly to ourselves.  We were joined by many severely disabled children who had this rare opportunity to visit a theme park which otherwise they would never have that chance.

All the thrill rides were open and my 7 yo had her first go on the Cylon Rollercoaster, flipping upside and zooming at high speed.

Needless to say by the time we wrapped up the day and got home it was midnight and Sunday was a long and very lazy day.

Perhaps some notes of observation regarding the race is to flag-off the categories at different times, provide water stations at half way points, use breathable material for the tees and ensure the finisher medals have sufficient time to dry if they’re painted before packing.

It’s understandable that the foundation may have teething problems since it’s only its second year and I’m sure as they keep organising this event they will get better at it.  Personally, I will happily continue supporting it.  Regardless of some of the minor issues, it is for such a worthy event that all this can be overlooked.

Overall, we had a good time as we always do.  Wishing everyone a terrific festive season.