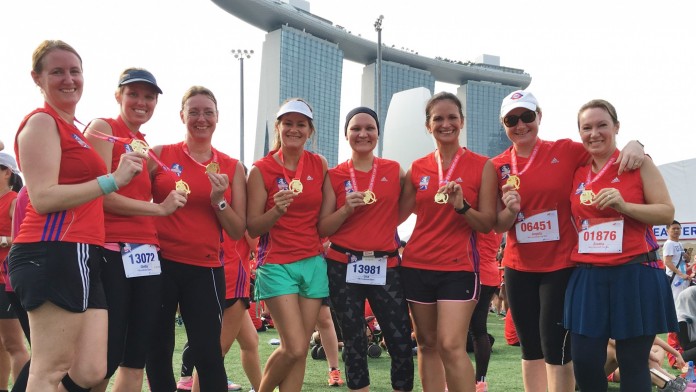 From humble beginnings of a mere 3,000 participants, the 2015 Great Eastern Women’s Run (GEWR) celebrates its 10th year anniversary with a participation of 17,000 women.  One of the largest races in Singapore it draws women young and old, local and foreign across three major categories: half marathon, 10km and 5km.

My debut in the GEWR was in 2014 as a running greenhorn with only three months experience under my belt. Whilst I completed a 10km run back then, this year I settled on 5km as I continue to heal my fractured ankle that happened way back in March.

Joined by friends from the Team Costa group we were grateful the haze has abated so that we may have a good and enjoyable race.  Given nearly two months of air pollution and limited outdoor training opportunities, quite surprisingly multiple personal bests have been accomplished.

With a familiar route and a sea of red tees, Michelle, Lisa, Caitriona and Avni tackled the 10km route, departing the Flyer past the F1 Pit onto Nicoll Hwy, returning via Republic Boulevard to finish off at The Float.

Michelle knocked off a minute from last year’s GEWR race to finish off in 54.53min and in 39th place.  Those bi-weekly 50km cycling outings are definitely paying off.  For Caitriona, this is her first GEWR but when compared to her 2014 SCMS race, she shaved off 9min on her 10km.  Lisa is no stranger to GEWR having completed 5km last year, however, she is a total newbie to 10km distances and she marked that well with GEWR’s 10th anniversary, finishing very well at 1:09hrs.  Lastly, Avni is no stranger to races or long distances.  With legs of steel and sheer determination she crossed the finish line in 58:48min.

Forty minutes later the second half of the Team Costa ladies were flagged off for the 5km category.  Vika and I were joined by Angela, Wizzy and Kate who are new to GEWR. I lost sight of Vika after a couple of hundred metres and not surprisingly she finished ahead of the rest of us in 32min.

Angela did quite well given that she’s never run in any SG event before.  It’s not easy handling the humidity here, so she did quite well for someone who hasn’t trained and still managed to finish off in 36min.

Wizzy and I maintained the same pace for the first couple of kilometers until her fitness outdid mine and the gap between us just kept widening.  After the 3rd km I didn’t see her in the crowd anymore.  With a finished time of 36.34min, I was only half a minute behind her.  It was a good yardstick for me.  I’ll be chasing you again Wizzy.

With regular 6km jaunts to our local mall, Kate is a solid walker with GEWR being her first exposure to a racing event.  Whilst walking alone can be calming and solitary, I think Kate enjoyed the atmosphere and camaraderie of the group and overall event.

To celebrate a race well done we met up with friends at Cafe Melba for a seriously good breakfast and some great company.

In overall, GEWR was a great event, well priced at $31, with tonnes of goodies in this year’s race pack and a nice gold finisher medal commemorating their 10th anniversary.  Thanks GEWR and see you next year.