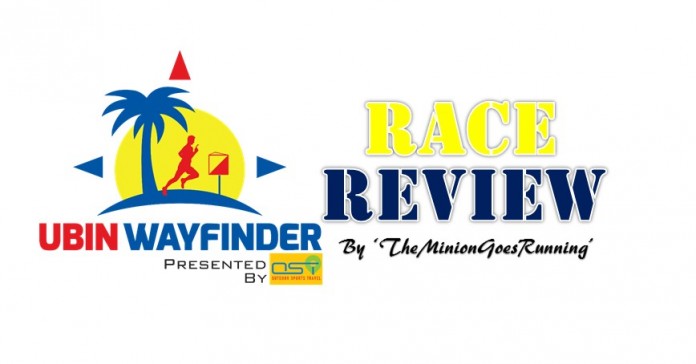 For the third year running, Singapore’s largest orienteering race Ubin WayFinder was held on 1 November 2015 at Pulau Ubin. This year, my 2 friends and I decided to participate in the non-competitive Ubin Explorer team category as it was our first time trying orienteering as a sport. I was pretty glad that it was a haze-free morning as I had been anticipating this race since my race pack arrived a few days before the race!

While most races will require runners to proceed to a certain venue to collect the race packs, Ubin WayFinder actually sent the race pack directly to my house! I would say it is a good move as it actually saves me the trouble of going down to collect the race pack in the mist of my busy school schedule. (Plenty of reports and presentations to be done. :/ ) The registered mail arrived at my house about 5 days before the event, which consist of the event tee and the race bib. The event booklet was emailed to the participants on the same day as well, providing the essential details such as things to bring, point to take note during the orienteering race, how to read the legends on the map etc.

Left house slight past 6am to meet my teammates before taking a cab to Changi Ferry Terminal (CFT). Upon arrival, we proceed on to the registration area at the CFT. Volunteers were also present to help assist in the registration process, which includes checking the essential items that are required for the race-compass, whistle and race bib. We were also issued the timing chip so that we can “check-in” at the various checkpoints.  At the same time, we were issued coloured chips so that we can take the ferry over to Pulau Ubin in groups of 12. Personally, I feel that the ferrying of the participants over to Pulau Ubin could be improved as there were several times where there was confusion with the crew trying to find groups with the same allocated colour chip so that we can be transported over.

Upon arrival at Pulau Ubin, participants were directed to the main pavilion to wait for the flag-off. I was early enough to witness the flag-off of the Mixed Duo Category- each pair, consisting of one male and female, were eagerly queueing up before the officials flag them off in intervals of 30 seconds. Meanwhile in the pavilion, there was a photo-booth for participants to capture their moments at the event, deejays playing music etc. The general atmosphere was quite high as I could see many teams participating in the Ubin Explorer category are actually families- with kids as young as 5 years old!

15 minutes before the flag-off timing at 8.30am, we were given a safety briefing by the official staff to introduce to us the key checkpoints, things to look out for during the race etc. And after much anticipation, we were finally flagged-off! After looking at the map, my team decided to focus on a few checkpoints to clear- there were a total of 15, and we thought that attempting to clear all in 2.5 hours would be insane given that it was our first time doing orienteering.

Some of the checkpoints were really challenging (and ulu)- we had to venture into the woods, go pass trees and forest just to find the particular checkpoint. Along the way, as we meet other participants, we were also sharing information about where the checkpoints were. I think this is the positive spirit of orienteering as well! 🙂

The checkpoint that really wow-ed me was the Ubin Highest Point. We had to climb some steep steps before finally reaching this checkpoint, but I would say it is totally worth it. The view at the point is simply breath-taking!

We decided to head to the Finishing Point approximately 2 hours into the race, considering that the cut-off is 2.5hours. Upon arrival, the friendly crew generated the real-time data and we were told our official timing. Banana, 100Plus, Red Bull and goodie bags were also given out to those that had completed the race.

On the whole, I would say that my teammates and I enjoyed the race a lot. It was challenging considering the terrain of the race, but we had fun throughout. I would recommend this event next year for those who would like to try orienteering for the first time.