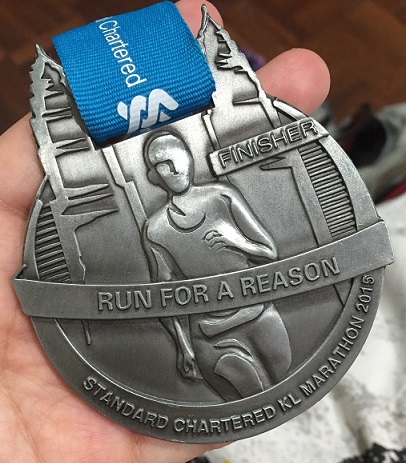 This was supposed to be my Human’s first run in almost 2 months – a “comeback” of sorts, you know?

In a nutshell, Human re-injured her IT band when she recklessly when ahead to attempt the Gold Coast Marathon back in July without sufficient training. Despite the injury, she decided to still take part in the 10km Mizuno Ekiden the week after (cos she didn’t want to let her teammates down), then the 24km Tri-Factor Run another 2 weeks on (cos she wanted the medal to complete her set – which is pretty, I must add).

Not too smart, if you ask me. And paid the price, she did. Not counting the Tri-Factor Triathlon in Aug where she shuffled through the 5km run segment, she never ran (or jogged if you wanna call her speed as such – haha)… and she was looking forward to finally hitting the pavement with SCKLM.

On Saturday morning, we took the coach to Petaling Jaya, where we were staying for the duration. After grabbing lunch, we headed to the race pack collection at Underground Dataran Merdeka.

The first thing that caught my attention was the loooooong row of colorful portable pottys lining the pavement near the race village. 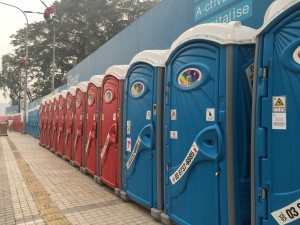 The REPC location wasn’t easy to find, honestly. Had to ask for directions, but it didn’t take us too long to reach the race expo! 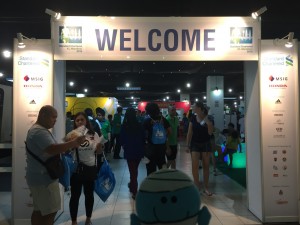 Kudos to the organizers.  While the race expo was small and relatively packed, the actual collection process was painless. With multiple counters for each category and a neat queue system, it was zero waiting time for us. 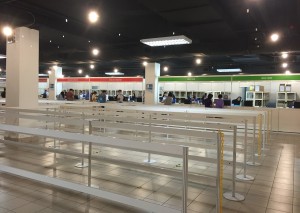 Maybe everyone collected their packets the day before?

We then took a few photographs before leaving to buy breakfast for the next day, and have a nice good dinner. I could sense that despite her misgivings (probably due to her recovering from flu), Human was getting hyped and excited about the run… texting her friends, going through her pre-race checklist… etc.

Alas, it was not to be… and this is the closest we got to the start/finish line. 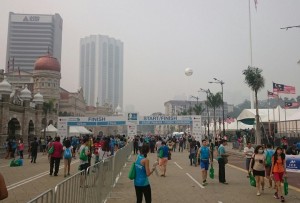 Due to the high API readings, a notification was sent out to runners the evening before, that the event is axed. Participants are to collect their medal & other entitlements on 4 October at the run area.

Similar to the REPC, the medal collection was well executed, and over in a couple of minutes. I don’t deny though, that it was slightly awkward for my Human when the volunteers handed her the medal with cheers of “congratulations” and “well done”.

Knowing her, she will not display her medal until she has ‘earned’ it, and I was right – she did make a declaration on Facbeook saying that she will do the HM another time, when the weather improves, wearing the SCKLM shirt. Well, now she has 2 medals on her backlog! And yes, of cos I’ll be there. 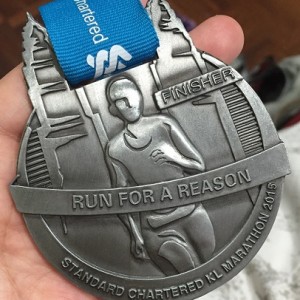