1 October 2015, Singapore – The Standard Chartered Marathon Singapore 2015 (SCMS) today announced the race route and improvements to offer both participants and supporters an enhanced experience at the country’s biggest marathon, which will be held over two days for the first time in the event’s history, on 5th & 6th December.

Runners participating in the full marathon will be better looked after than ever been before due to the substantial participant support enhancements such as improved route management and the availability of 16 hydration stations, strategically placed to offer runners replenishment on average every 2.6 kilometres. In addition, the half-marathon will for the first time have a banana station, all aimed at helping more runners get to the finish line.

On-route entertainment has also been given a boost this year at locations such as East Coast Park and West Coast Highway, to keep runners inspired and motivated. Runners can expect to see cheerleaders, live bands or LED robots among additions, creating a vibrant and energetic atmosphere to spur on the runners, as the ply their way through the halfway point and into the home leg of the race.

The route for the 2015 Marathon will remain largely unchanged, meandering through the country’s most iconic landmarks, beginning outside of Mandarin Gallery (Orchard Road), proceeding along shopping district Orchard Road before turning at Singapore Management University (SMU) and then to two of Singapore’s most popular tourist spots Clarke Quay and Chinatown before moving onto Nicoll Highway and towards the Sports Hub.

The middle third of the race will see runners cover the length of East Coast Park, before reaching the Marina Bay district where participants will get to run by the world-renowned Garden’s By the Bay and Marina Bay Sands, and finally returning to the central business district for their finish at the Padang.

Participants of the half marathon will begin at Sentosa Gateway, running through Sentosa Island, and Universal Studios Singapore where they will be greeted by characters from their favourite movies. Upon leaving the island, they will make their way into the central business district, and pass Marina Bay before ending at the Padang.

The 10km runners will start their race at Esplanade Drive, passing by the flyer as they run on what was just weeks ago a Formula 1 track. They will then make their way onto the historic Merdeka Bridge before turning onto Nicoll Highway, Republic Boulevard and Raffles Avenue.

The Kids Dash, which will become a standalone event this year, takes place on Saturday 5th December. After the 700m race, the youngsters and their parents will be able to enjoy themselves at the 8th ASEAN Para Games carnival or cheer on our para-athletes at the various competition venues at the Sports Hub. All these happen right besides the 100PLUS Sports Promenade where the Kids Dash takes place. 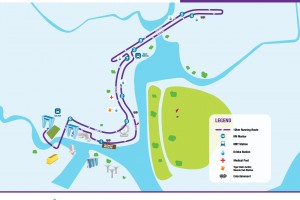 “Having the kids dash as a standalone event this year was one of the key improvements we made after taking into account feedback from parents and participants. By working in partnership with the ASEAN Para Games, we aim to give the children an opportunity to learn about the Games, broaden their knowledge of sporting diversity, and open their minds to the various abilities and skills required to compete at different levels.”

On the enhancements and changes to the marathon, Robb added:

“We are constantly looking to improve the overall race experience, and I am sure everyone will see from the range of new and enhanced initiatives, and route improvements for both participants and supporters that we have managed to do just that. Each of the world’s best marathons have a unique identity, and we aim to do the same as we grow the SCMS into one of the top marathons in the world that appeals to an international audience. Our goal is to develop the event that attracts not only running fans, but also their friends and family who can show their support and enjoy a family day out by take part in the festivities.”

In its 14th year, Standard Chartered Marathon Singapore 2015 will take place on 5 and 6 December.