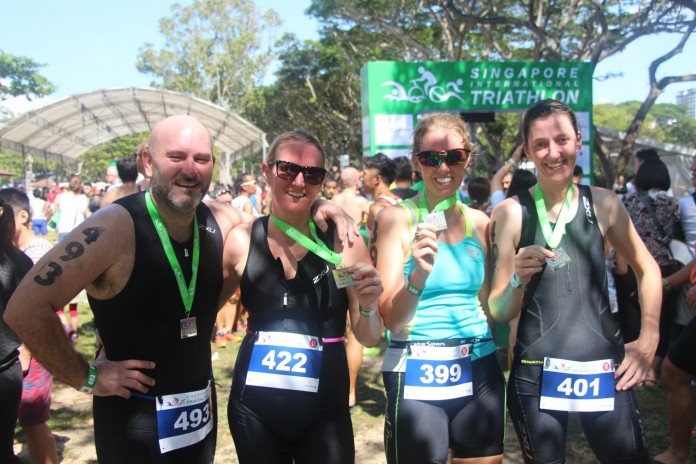 It’s 9.45am and a small team of Costans are nervously waiting for their wave to commence.  Michelle, working on becoming a seasoned triathlete (this is her 4th mini-triathlon in less than 12 months) is joined by triathlon newbies Paul, Caitriona and Maree.

It’s a terrific morning, great weather albeit a little hot given the hour but thankfully the we are well shaded as we wait.  My job today is not as participant but photojournalist.  Not too difficult given that I love taking photos, they are all good friends and the event is 300m from home.  I am joined by several friends from the condo and half the Little League contingency here to support their mums and dad.

Finally the female category is flagged-off and a group of 46 women take off into the sea.  The course was a little strange in its triangular course but at least the tide was in, unlike the Nila Swim race we experience a couple of months ago.

As the Costan girls reach sand again Caitriona comes out first, followed by Michelle and then Maree.  A typical issue in an open water competition is being blocked by other slower participants.  Each one of them encountered being blocked by breastroke swimmers who were swimming parallel with another thereby limiting any opening to those behind.  Short of swimming over them as some of the more serious triathletes might do, those seconds lost in trying to outmaneuver slower swimmers in front, costs in the overall timing.

With slightly over 3 minutes in the transition area, the girls embark on their 12km cycling race consisting of two loops of 6km.  With them on their way I race back to the swimmers hoping to catch Paul in his category but the fella is way too fast for me and I barely catch him as he makes his way into the transition area.

Taking position in the cycling arena, it’s not long before Michelle knocks off her first lap.  Fast as a bullet I’m thankful she’s wearing bright and recognisable gear otherwise I may have missed her flying by.  At an average 30km/h Michelle’s cycling was a vast improvement from her 2014 effort and first outing in the triathlons. A new bike and regular bi-weekly 50km rides are definitely paying off.

Finding the others on the cycling track wasn’t quite so easy given that they were all wearing black and found myself shooting complete strangers thinking it was them.  Eventually I narrowed down Caitriona with her pink belt, Maree with her blue helmet and Paul another speedy bullet with his charming good looks.

I nearly missed Paul on his second lap as I was expecting Caitriona to come through.  In the last second I see him overtaking his wife and barreling down that finishing line at 30km/h like a man on a mission.  Shortly after Caitriona enters transition and a few minutes later Maree.

Changing position again, I settled near the Finish line camera on the ready with the sports function in full mode.  Not surprisingly anymore, it wasn’t long before Michelle showed up and finished her race in 43 minutes, shaving off 7 minutes from her previous triathlons.

Miss Smiley, as I came to consider Caitriona, given that she smiled throughout each leg of the race came behind her hubby Paul and shortly after followed Maree.

I really enjoy participating in races but I also experience just as much pleasure out of watching my friends challenging themselves.  This was a great event, besides the extra bonus that it’s in our backyard in terms of home proximity, and there was an even greater pleasure to be had watching Michelle take podium and accept her First Place trophy.

For the first time triathletes, they weren’t too shabby I have to admit.  Paul came in 4th in his category and so chuffed with himself he signed up for the Sprint version of the Trifactor Triathlon in 3 weeks.  Caitriona came in 5th in her category and Maree who raced for the first time in Singapore and a triathlon at that came in 8th.  An incredibly good morning for all.

So incensed by their experiences both Maree and Caitriona have registered for the Trifactor Triathlon in the Freshmen category.  The buzz and excitement has spread itself amongst our Costa team that two more people have signed up for the next triathlon.  This brings the Team Costa contingency to 13 participants making it the largest racing gathering since its beginning a year ago.