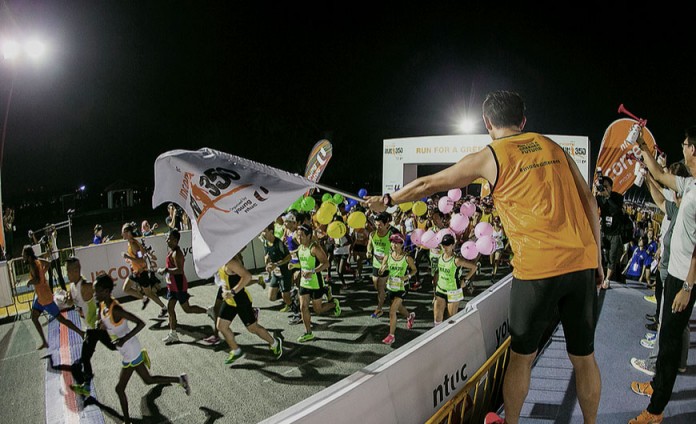 A modest month with only a handful of events which nonetheless boasted spectacular participation rates. Here’s April’s race highlights.

Back for the sixth year, Southeast Asia’s premier eco-run was once again a success. The 5am start did not put off the 12,000 runners who participated this year, in the name of running for a greener future. The NTUC Income Run 350 offered runners the choice of 10K or half-marathon distance, and an 800m Kids Dash. The race scored particularly well in the route planning, with runners starting at the F1 Pit Building and covering the downtown area, hydration, where water was served up in cups instead of bottles to reduce waste, and its generous runner’s entitlements which included a backpack and an exclusive Compressport running singlet.

Runners were also satisfied with pre-race logistics, which included a shuttle bus service in line with reducing the event’s carbon footprint by encouraging public transport use; amenities and race day activities also fared well. Users gave the event an overall rating of 4.4 out of 5.

Branding itself more as a party than a competition, the Music Run Singapore 2015 was part of a global series of Music Run events. The 5K race that happened on Palawan Beach took runners through 5 different music zones – rock, pop, retro, hip hop and dance, before finishing back at the Music Village.

Unsurprisingly, the race scored particularly well in the race day expo and activities. Route planning and amenities also ranked highly. Runners were satisfied with pre-race logistics, hydration and runners’ entitlements. Users gave the event an overall rating of 4.4 out of 5. Despite a thunderstorm which caused a 45-minute delay to the event’s start, the weather calmed down soon enough and the triathletes were blessed with calm waters to start their swim in before hitting the flat bike and run routes. Cycling times were nonetheless compromised by the wet roads, with extra care required around the U-turn. The 12th edition of the JP Morgan Corporate Challenge saw over 14,000 runners representing 297 companies, including big names like Starhub, Deloitte, PwC and ANZ. The event, which was sold out once again, aims to promote workplace camaraderie as colleagues bond over a common non-work goal. Through a gesture of corporate social responsibility, a portion of each registration was also donated to The Smile Mission.

The Friday evening race which took runners 5.6km from the Esplanade Bridge to the F1 Pit Building also made for a healthy alternative from the standard post-work drinks at the bar. Stuart Haynes defended his champion title with a finishing time of 17:59, while Shirley Zhang from F1 Runners scooped the women’s title at 22:15. All aspects of the event rated above average, with runners being the most satisfied with route planning and hydration. Overall, users rated the event 3.8 out of 5.