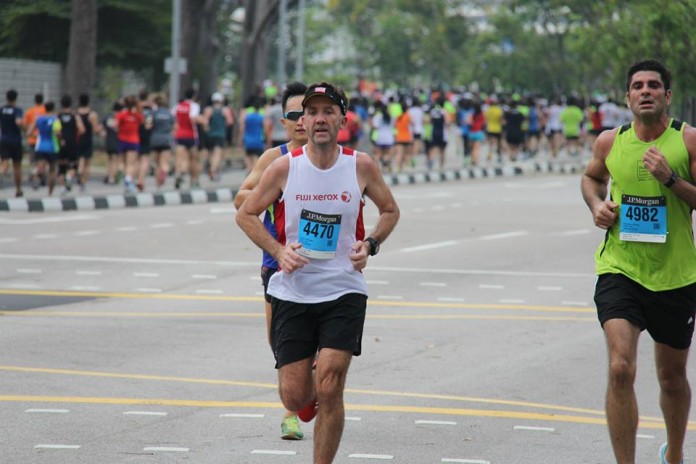 Hot on the heels of the Green Corridor is another of my favorite races of the year, the JP Morgan Corporate Challenge. 5.6km of lungbusting racing through the sticky streets of Singapore in the heat of the afternoon.

This year I have enlisted 14 colleagues to join me and the other 14,000 runners. Two have done the race before, the rest are JMPCC virgins. As well as being the company team captain, today represents the end of a chapter for Mount Sinai Striders as ‘shug’ is moving back to the UK (to chilly Scotland) next week, so this is his last race. He works for Barclays, who are trying to retain their team crown from last year, so there is some serious racing to be done.

I meet Scouse Pete and Shug at One Fullerton and we join the queue for early access to the starting pen. We meet a few friends while we are waiting, Stu Haynes, last year’s winner, Al Slade, Tony Seakins, Conor Delahunty, Prasant Kannoth and Shirely Zhang from F1 and a bunch of other regulars. As usual there’s a bit of start line banter, great cameraderie and some good laughs as we wait for the flag off. It’s stinking hot and there is zero wind, so with 14.000 people squeezed together on Fullerton Bridge it’s sweltering.

Shug and I discuss the plan:

‘ok, lets not go off too fast’

‘agreed, its pretty crowded so we should be ok, take it steady til the pit lane then go hard’

First Km, 3:26 – shit! how did that happen. I’m blowing already, struggling to suck in oxygen. We’re in front of the float and I run through a large puddle, my shoes start slipping and sliding all over the place. Things aren’t going well. I manage to get into a bit of rhythm down Republic Avenue, but Shug is a good way ahead and I have a feeling already I won’t catch him. 5.6km is over before you know it and it’s hard to make up 100m unless the person in front really drops the pace.

Into the final 2km and a couple more people come past me that I would usually hope to stay ahead of, I’m not happy, but I try my best to focus and push for home. Legs feel fine, but I’m struggling with my breathing for some reason, so never quite getting comfortable, off a good pace by at least 10 seconds/km.

Into the pitlane straight and a last sprint for the finish line.

I’m over it pretty quickly, catching up with Shug and the others – Stu wins again (17:59) and Shirley has won the women’s event (no Suzy Walsham this year) so it’s smiles all round. Thanks to Stu, Morgan Stanley win the team event, pipping Barclays by a few seconds. A funny exchange with my financial advisor, a 6foot 4 ex rugby player who can hardly stand at the end of the race and a quick catch up with Raja, and at 1830 I re group the company team for a quick photo opportunity.

And then it’s off for a few beers to say goodbye to shug.

I love this race, the vibe is AWESOME, it’s competitive, it’s a great course, it’s super convenient when you work in CBD and overall it’s a great feelgood afternoon in the amazing marina bay. Love it.

I’ll be back again next year, trying again to get under the 20 minute mark.

Next Up Energizer Night Trail (12k) a first for me, should be fun. See you there?