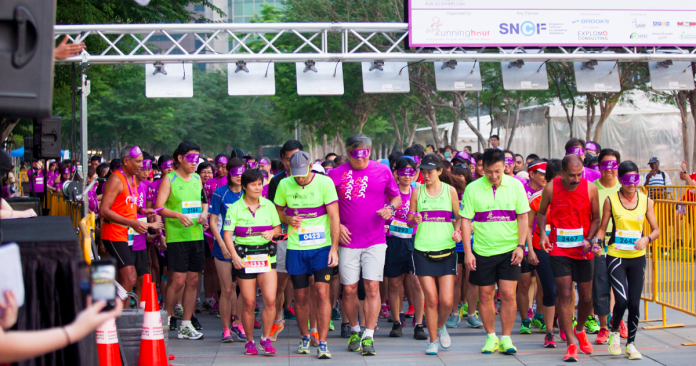 I attended one of the workshops before the race to learn about the blind/physically challenged and how they’d run with their conditions. (previous post)

Race pack collection was nice and smooth; I collected on the Saturday around lunch time, there were only a few other people there and we were in and out in no time.  On the way out, I checked the timing chip and it worked properly.  I thought I read on the reminder email sent a few day before that there was going to be some activities, but I didn’t notice anything else was going on so I left for lunch.

The t-shirt turned out to be very small in size so it was an opportunity for me to wear the JustRunLah! t-shirt for the first time.  I like to always try to wear the race t-shirt or at least wear one in a similar colour 🙂

Come race day, 5.30am wake up, second Sunday in a row.  Drive down was smooth, easily parked at the Wilson car park round the corner and a nice couple of minutes walk to the starting pen as my warm up.  But it was a hazy day.

Off I went to the starting line of 10k competitive.  They flagged us off first at around 7am.  The 10k blind run were also ready on the lane next to us.  They were flagged off a little bit later, as they had to run with a blindfold for the first 500m each.

I wasn’t too far from the front of the starting line and noticed for the first 500m that there were lots of faster runners going past me, which kind of put me off and distracted from my original pace. Without noticing, it pushed me to run faster but also burned out sooner.

I didn’t bump into many of the blind / physically challenged runners, one was in the 1-hr Pacer group, passed me at around 4 km, another was on a wheelchair with a great determination.  Very impressive.

The race was well organised.  Volunteers were great.  I like to carry my own bottle so I’m not too sure about the water stations but seemed enough to me.  There were a lot of photographers along the way.  The only bad thing was I didn’t see a clock above the finish line so I was busy trying to stop my app as I crossed, not noticing the clock was actually on the right hand side 🙁   I clocked a little over 1 hour, 1 minute faster than my time the previous weekend.  Another PB.  I was happy.  I would love to make it below 1 hour.

I grabbed my cold bottle of water and walked around a little.  There was a Holiday Inn booth which my husband missed as he could have gotten his coffee.  They were also selling hot dogs which looked yummy but not sure we’d eat that after the run  🙂

Some people joined the zumba session for a cool down, I thought my legs had done enough for the day so I headed back  😉

I think it was a good race for runners to clock in their PBs.  I certainly enjoyed it.  It doesn’t take much for a race to please me, just block off some pretty route, provide some water, security/medics, a timer, and I’m a happy runner <3<3