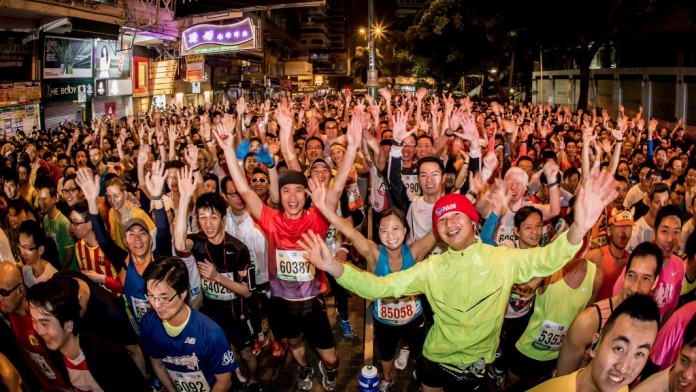 Signing up for the marathon was piece of cake. Wake up early, sign in early, registered, go back and have a power nap, prepared for work. Simple as that.

I was injured prior to training for 2014 HKM. I completed 2014 HKM in 3:39, which was disappointing as i faded away from 37km onwards. The memory of defeat could still be felt in my mind, the throttling up and down the hills from 37-41km.

I started my marathon training early. Started getting used to 20km runs which was a total torture from the off. Getting used to running long distance again requires practice. Week after week i would run towards Pierce and back. On some days, witnessing fellow friends doing their training there brightens up my day, made me felt I’m ain’t in it alone.

Soon the 3 crucial weeks came. I forgo all sorts of training at ASICS, New Balance and SAFRA Mount Faber, to train alone, to get used to racing in a course full of peeps but ultimately you are alone in pacing yourself for 42.195km. The first week was all right, i took it easy and managed to complete 32km in around 5:4x pace. Not fantastic since i managed 30km in 5:3x pace just a week before. I’ll take positivity any day, just told myself its ok, pace doesn’t matter. At the back of my mind, i know it does, but you have just one run to proof it. In the week before peak, I started running all my shorter runs at 5min pace. Some slightly faster, some slightly slower, some with a negative split return, some with tempo effort without measuring pace. The truth is, i kept my mind thinking I’m doing 5min pace, without looking at the watch, and see how i fare after every training. 34km was on course and I DNF that run. It was the run where i drank the portaloo toilet and got some kinda stomach upset on the return. Some runners witnessed me walking back from Bishan Park to Potong Pasir. During the hour-plus long walk, lots of thoughts ran through my head. I tasted defeat again. Whenever i told myself to start running, i would come to a stop after 100m-200m. Since the run is long gone, I took this opportunity to suck up all the sun rays that is out to torture me while i walk back. It was terrible and miserable. The walk was lonely and if I were to do this in HK, I wouldn’t survive the chilly conditions. The moment i reached home, i told myself, I shall never taste defeat again, at least not till the Marathon is over.

Peak week came. Completed all my short runs at 4:40 pace and that gives me tremendous motivation moving into my long run. Somehow my legs felt ready for the challenge ahead and recovery was fast. This seem to always happen to me on peak week. I thank God for always giving me this strength during crucial times. Its hard to explain. I went forth downstairs, donning my race day attire and stand in front of the start line @ my void deck. Gave a quick prayer, put on my MP3 player, pressed start on my 620, leap with a jump and off i go.

I could fondly recall how smooth the start felt. I knew the pace wasn’t 5:30 but i felt comfortable and was intent to drag my way through. I made it to the 17km mark just 100m away from Mandai road and u-turned. When that happens, i told myself here we go, simulating the marathon’s uturn point, i picked up my pace slightly and can feel the effort kicking in. With 10km left, I climbed up the road from Upper Thomson Road to Old Upper Thomson Road. I saw Giang and she said Hi, waved back at her and was motivated within me as I’ve not seen her running in a while. Picked up my pace and told myself there’s no turning back now. Saw boss Andy Neo with his pair of khakis and that gave me even more motivation. When i reached Casuarina, just 8km to go, i saw Paul Sum, and Baldwin training hard as well. Motivating like siao now. Before exiting OUTR, I saw Leng Boon and Roonz doing their thing. If seeing all these peeps out there ain’t motivating enough, I don’t know what is. Ran as fast as i could and i finished the long run in 5:18 pace, the fastest i ever ran in any training run > 30km.

Fast-forward to raceday Woke up early and Ivan wasn’t really keen in running. Dragged him off the bed as well and met up with Jessrey and Samuel at the lobby. Took the lonely walk to Causewaybay MTR. Met up with a China woman whereby we had a chat with, help to lessen the tension before the race. Once at the race site, your excitment goes over the top. Lots of runners are running around warming up, putting their baggage and trying to squeeze into the start line. We peed, put our bags and headed to the start line. I lost all of them as i was trying to get as front as I can. In the end not very front also. Have to settle for a minute after flag off. Set my watch to show only TIME 🙂 I maintained my pace for the first 5km. Resisted the temptation to look at the watch and just kept going at a pace which i feel was slightly faster than training. My weakness is to keep up the pace for the initial KMs as I’m more used to running slowly into a negative split. At the 10km mark, there was a huge clock with gun time. 51:50 i could recall. I was 50seconds away. By then i thought siao liao, but I’m still inside PB pace. Told myself to relax and just go with the flow and see what happens at 21km. From 12-21km, we get to see fellow runners as we u-turned twice. I greeted and shouted for every single runner whom I could recognise. Be it someone whom regard me as a friend or not, doesn’t matter. Should always be professional about it, even if they pretend not to see me.

When i hit the 21km mark i saw 1:40:1x, Wow i was still lagging by 20seconds and i thought i have energy to burn. The next few km was downhill and i went forth keeping pace as i descend back to ground level. Excitement level rose when i was at the 30km mark and I have clocked a negative split and have around 1:40 of buffer. If i were to maintain, I would finish in under 3:28. Then came the 30km mark where the merger with the half marathon runners came. Lo and behold, there were nobody merging with me! I ran past the merging point with a smile. The faster runners are clocking like 4:40 pace and dropping me like a fly lo.

Then came the last tunnel, 34km downhill, 35km flat, 36km uphill. I told myself the key is to survive the uphill and subsequent undulating hills littered from 36-38km which i died last year. At this point in time, i was talking to myself more and told myself to run hard on every uphill and attempt to catch anyone i see. At the 38.5km downhill to Central Pier, i realized my left calf is cramping and I knew things were gonna go down ugly. I stomped down bravely and to my surprise, there were two more hills before the final one, akin to the Nicoll Highway hill in Singapore. The first was ok, the second defeated me. Sprinted uphill and saw the water station and stopped there having a water parade. Supporter was indicating I should go for it but I just stand there and catch my breath. I knew the 41km slope is within sight and started running fast again. Whack that final hill and i know the end is near. 1km to go. Its now or never, i saw my watch and i was not on pace. I pushed hard and finished the final km in 4:40 pace.

I ended the run with the best smile on my face, tears forming around my eyes. I did it, finally, a 3:30 timing after 4 years of running. The helpful volunteers saw me from a long way and waved at me with my baggage as i limped over. When i reached, they look at me and give the thumbs up sign. Where do you find this anywhere near Singapore may i ask? Goodness me.

The run gives me tremendous motivation that I could go underneath this timing next time.

With that, i look forward to my recovery and getting up to speed again end this year as the next HKM beckons.

Disclaimer: JustRunLah! members can maintain personal blogs and post articles such as the present. All messages, articles, and any opinions, advice, statements or other information contained in these posts or transmitted via JustRunLah! channels are the responsibility of the respective authors and not of JustRunLah!, unless JustRunLah! is specifically identified as the author of the message. The fact that a particular message or article is posted on or transmitted using this web site does not mean that JustRunLah! has endorsed that message in any way or verified the accuracy, completeness or usefulness of it. For enquiries please click here to contact us.
Our database has
7162
listed events.
Get tickets