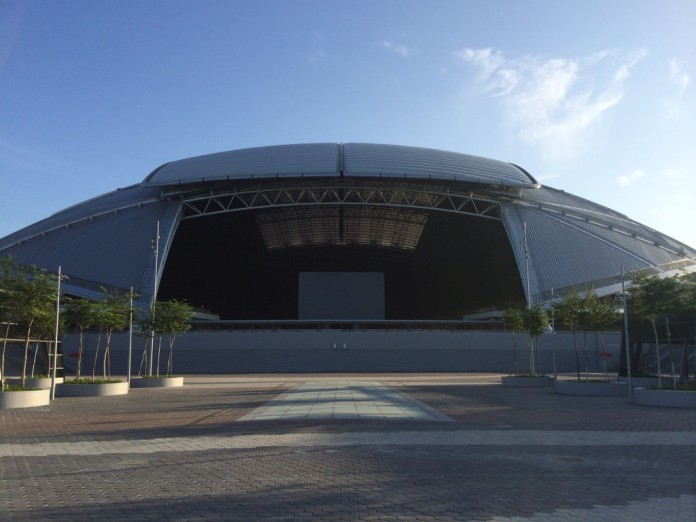 As a lead up to RunningHour 2015 on 22nd March, Running Hour is organizing 3 workshops to create awareness and I was glad to have attended the one held on 17th January at the Sports Hub Library. Since I didn’t do much homework prior to the workshop, I basically went in, mind the pun, blind. I was however fortunate to meet one of the members, Liz Koh, who was kind enough to give me more information about RunningHour prior to the start of the workshop.

Liz shared that RunningHour was basically an inclusive running club to promote the integration of people with special needs through running. The basic idea is to get runners to join and play the role of running guides for visually challenged runners as well as intellectually challenge runners. RunningHour currently has about 400 members(or guides)with 120 beneficiaries and RunningHour2015 is basically organized to increase awareness and in the process, increase the number of beneficiaries as well as guides.

A point which Liz mentioned was integration of beneficiaries – more specifically not to create a dependence. This can be seen from the very fact that the beneficiaries actually made their own way to this workshop by themselves! In the time Liz was telling me about Running Hour, I saw the beneficiaries arriving either with the help of member of public or together as a group. To me this shows, a clear objective of the group but also the enthusiasm of members. It was very heartwarming to see the happiness of the beneficiaries on seeing as well as hearing their guides.

The workshop started with the topic of intellectually challenged runners beginning with understanding intellectual disabilities. Apart from identifying as well as differentiating the different disabilities, the speaker Michelle shared the benefits of running for the intellectual challenged which is mainly for them to stay healthy and improve their social skills through engaging people and making friends.

Michelle also gave very good tips for those who are keen to eventually be a running guide – from how to encourage,engage and inspire them to how to avoid potential issues such as not giving out your contact number(as some of them will not be able to tell if it is a good time to call), not being afraid to turn them down(such as going out of the way to travel with them) and verifying the accuracy of their statement. Lest it seems like it is drawing a line between the guides and beneficiaries, I believe it is again a move towards integrating them by inculcating the right habits.

Lastly, the methods of guidance while running were introduced. Guides need to be firm but nice and use simple words. Should new terms be used, guides should explain and introduce the terms being used. Concrete guides, such as actual distance or markers(lamppost etc) should also be used when guiding the runners.

This segment of the workshop ended with an interaction session with intellectual challenged runners. My group which was led by Liz, was introduced to Lee Ming and Sharifal. It was very clear that they enjoyed being in RunningHour as they not only shared their love for running as well as more about themselves. The guides in the group also shared how the beneficiaries will show their appreciation for the guides such as through giving thank you notes during Christmas – very nice gestures.

The next segment was on visually challenged runners. Kelvin was the speaker and as what Michelle did ealier, he shared with the audience firstly on understanding visual impairment. One of his first few points was how from young he didn’t know he was any different from others left a deep impression on me as it was something that I had never thought of. He also shared how he played football when he was in school ;using a plastic bag to contain the football to enable him to ‘hear’ where the ball was, comparing it to how he used to run after chickens in the kampung in his younger days simply because they made sounds which made him know where they were. These points though sounding simple, showed how he didn’t allow his visual impairment from stopping him from being active.

Kelvin also shared how to help visually challenged people, not just runners, on some points which again sounded simple but really made sense. One of the points was to establish the ‘level’ of blindness of a person – partial or total, to determine the kind of help needed. Next(although not likely to happen while running) is to NOT hold onto the cane of blind person as doing so is as good someone holding to your eyes while guiding you. Most importantly was when offering help or directions. Kelvin’s examples of how people answered him when he asks for help;

Qns: Can you tell me where is the dustbin?(Ans:There)

This goes to show that while some of us would really like to help, we sometime are not much of a help at all.

Finally, Kelvin shared some tips for guiding visually impaired runners such as; establishing where he/she prefers the guide to be, how to warn of obstacles/crowd by either informing the runner himself/herself or warning other runners(in the case of crowd) and also establishing a method of guidance such as clock method.

At this juncture, I had to leave the workshop, missing the hands-on session as well as the question and answer session. But before it left I managed to get some words from John who is the founder of RunningHour. John shared that inspiration for the name of the group basically came from something equally inspiring – Earth Hour and the idea was to basically integrate the visually impaired and intellectually challenged thru running. With more visually impaired runners joining RunningHour, John would also like to see more intellectually challenged runners so as to further help integrate them.

While I didn’t join the hands-on session, it was basically a session for the participants to have a feeling of not only guiding but also to be guided while blindfolded. Participants need to guided thru a flight of steps as well as to run blindfolded to experience how it was like for the visually impaired while running. While it was certainly not easy, from the photos posted I am sure the participants had their fair bit of fun.

Run So Others Can Run

Honestly, I was looking forward to a physical workout that morning but I think I got more than that. If I may say, it was an emotional ‘work-out’ – listening to the members share how being in RunningHour has change some of their perspectives and listening(seeing) what difference RunningHour made to the lives of the beneficiaries, certainly shook me up in realizing something as simple as running which some of us have taken from granted can have such an impact to people’s lives. As what Kelvin mentioned in his segment, ”We are all disable in some way, it is just a matter of how clear our disability is(or how well we hide it).”It has definitely reminded me that there are a lot of things that I can be thankful for.

I seldom do this but I would like to encourage everyone to participate in RunningHour2015 to show your support for the members and beneficiaries of Running Hour. In addition, if possible, do consider attending their next workshop which is taking place on 28th February, 0830hrs at Sports Hub . It will be a good way to spend a Saturday morning and I am very confident you will enjoy it. Do visit www.runninghour2015.com for more information on RunningHour2015 as well as the workshop.

Photo Credits: RunningShots, Sotong. Many thanks for the permission to use the wonderfully taken photos!