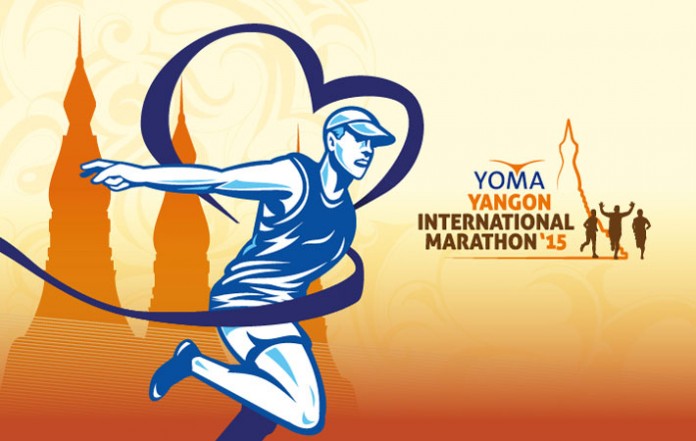 I was lucky enough to win a slot to run at Yoma Yangon International Marathon 15′ from a contest held by Pris Chew’s blog. It is definitely once in a lifetime experience to run at the outskirts of the beautiful city of Myanmar – Yangon. The locals were kind and warm towards me as I ran past villages, small towns and the expressways (roads).

As recommended on the marathon website, I contacted KHIRI TRAVEL on arrangement for transport, accomodation, land tour and meals. My tour guide, Aye, was caring and attentive to make sure the itinerary went according to plan. I took a two-way flight with Malaysian Airlines with a short transit at Kuala Lumpur.  There were snacks and in-flight entertainment to keep me occupied throughout the whole 3 hours plus journey.

Being a die-hard foodie, I roamed at the streets near chinatown and found these awesome snacks. (this looks a lot like ‘satay’ but i think its called ‘lok lok’, like those I ate in Malaysia) It was very tough to find a money changer to change my USD or SGD to Kyats. But lucky me, I found a cafe which serves awesome chocolate smoothie and cheese fries! =) And best of all, they accepted US dollars.

However, do note that some money changers will not accept torn notes like these: On the morning of race day (sunday), it was like 18 degrees at 5am where the full marathoners were flagged off at Thuwunna National Indoor Stadium.
The temperature was somewhat similar to my gold coast full marathon back in July. Fortunately, it did not rain. I managed to run at a pace of 6 to 7 mins per km for the first 28km before I felt really exhausted under the hot sun. Throughout the whole 42km route, we had the privilege to ran past some villages, towns and the beautiful Inya lake. I also had the chance to meet and chatted with some fellow Singapore, Malaysian and Burmese runners too.=) The water points were sufficiently staggered along the way and I had several cups of 100 plus. There were occasionally some hilly slopes but lucky me, I had trained myself with tempo runs and hill repeats back in 2014.

The last few kilometres were really a tough challenge as the roads were closed for runners and there was heavy traffic on the roads.
The petrol fumes and smokes from traffic under the hot sun were intolerable. Nevertheless, it was encouraging when a lady driver unwind her car’s window and cheered me to run. My finished timing was about 5hrs 31mins and ranked 24th out of the 30 runners in female category. This was certainly a great start to 2015 for me having to complete a slow and meaningful run in Yangon. I would also like to wish all fellow runners a healthy and joyous year of running! =)

Some books which I thought will be good to share with the readers too: When all else fails in a marathon, WALK. =p