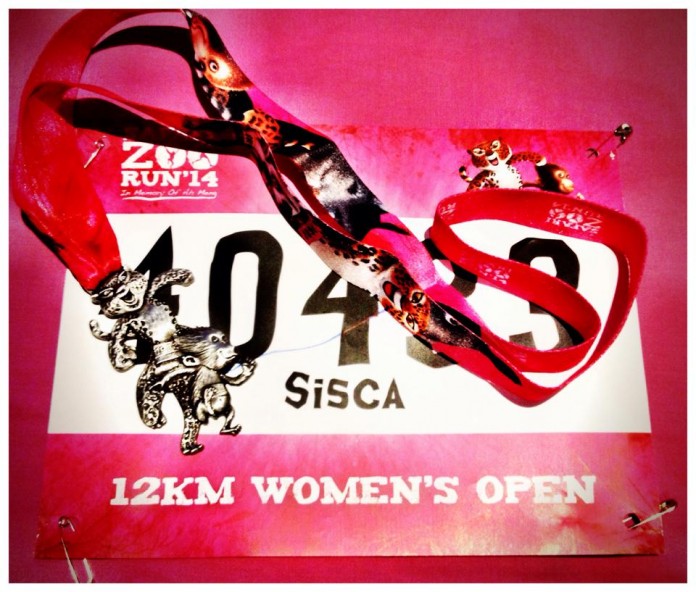 After running happy and freely for 2 years, a friend asked me to run with her for the 10km Great Eastern Women’s Run, in place of another friend who was injured. Mind you, it’s not officially allowed but if it doesn’t bother you to perhaps not receive an official time against your name (and the organiser doesn’t find out) then it’s ok. You could still get the medal/t-shirt (depending on your friend), note your own time and, of course, the experience. As I had been running regularly, running a 10km race in a week’s time was not going to be a problem. I was ready. My only hesitation, and why I hadn’t run any races previously, was because I didn’t want to wake up any earlier than I already had to! Ha! I’m just not a morning person, you see.

A race usually flags off around 6-7am, even earlier for longer distances. I’d need to be there about 30 minutes before so I’d have to leave home about another 30 mins earlier. Then…. I need to be up about an hour before that!!! – in time to have my coffee and breakfast, so they are properly digested, and to get ready!! Soooo in total I’d have to be up 2 hours before the flag off time!!! On top of all that, its normally on a Sunday!!! When I love to sleep in…

Anyhow, the GE run didn’t happen because the friend hadn’t picked up her race pack and it would have to be her to pick it up on the race day to present her ID. Phew!

Somehow that changed my mind. I thought I was kind of ready to run a race, why not sign up for my own race?

I didn’t see any upcoming race I was interested in until I was walking around the zoo with my daughter and said to her how nice it would be to run there! Then I remembered that I’d seen an advertisement years before that there was some kind of a zoo run. So I googled it as soon as we got home, found out it was the Safari Zoo Run and the next one was actually in about 3 months time! How excitingly convenient!!! I signed up for the 12km.

Flag off was at 7.30am. I did wake up 2 hrs beforehand. All set and ready. I was just nervous because I didn’t know the route/course. I didn’t know what to expect. However, the 12km is 2 laps through the night safari and the zoo so on the second round we kind of know what was coming. It was as nice as I had imagined. Running through the “jungle” with some animals as our spectators. Although there were not as many animals as I expected.  My only surprise was the hills, especially the one right before the finish line. I didn’t train for any hill!!‎

It was their 4th year or something. It was well organised, I thought. There weren’t too many people, around 2000 I think, which was nice. T-shirt was nicely designed, good materials, and the medal was also uniquely designed. Apparently they change the designs every year but maintain the zoo theme. They were all cute.

I was quite satisfied with my time, most of all I ran it non-stop. My natural uncompetitiveness told me to go slow and steady, as long as I last and finish, I would be happy.  I listen to my body and pace, push when I can / need to (like on the surprise hills!).

It was the race I was most looking forward to running again next year but unfortunately the flag off will be at 4pm. It’s too warm for me (unless after the rain), also I have now become used to having to wake up early for a race so I prefer to run in the morning when it’s cooler.

Yep, it’s not only running that’s addictive; after my first race I kept on signing up for the next ones!!!

I love running surrounded by greenery, runs in the City / Marina Bay just don’t interest me. I check the route first, before I sign up for a race. Unfortunately, at registration time the organisers don’t always announce the exact route which makes it harder for me to decide. Sometimes it’d be sold out by the time they announce the route. The main reason that attracted me to run races was to experience/explore a route I don’t normally run or get to run, like the Safari Zoo Run.

Other reasons are if the t-shirt or medal looks nice (yes, that shallow!) but those are the memorabilia we get to keep so it’s good to have something nice.

The only thing I don’t like about running/training for races is that it gets boring being tied up to a training plan. It takes away my whole purpose of running to begin with, which was freedom.