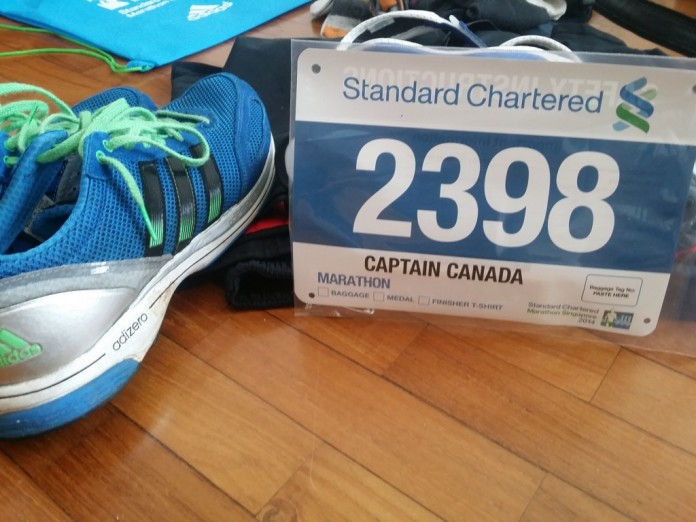 Captain Canada back again. I have not written in over two weeks which breaks a promise to myself that I will post my antics once per week. Well I think it was worth collecting my thoughts and waiting to do my first race review on JustRunLah.

When you think about the word pain what are some things that come to mind? Is it that strange ache coming from that part of your body you didn’t even know exists? Is it the head ache I get from my lovely fiance lecturing me about how much I run? or is it the pain of knowing that you are about to endure 42km of torture?

Well if your answer is all of the above then you are about half way correct with my experience of the Standard Charter Marathon 2014.

I will take a moment at this time to walk you through Captain Canada’s Play by Play of SCM 2014 and the lessons I have taken away from this years event.

3AM the sound of my annoying Car horn alarm rings and little did my phone know I was already awake waiting for it. As I turn off the phone and go through my morning ritual of singing the Canadian national anthem I get my head prepared for what was coming my way.. I walked over to Redhill station to take an early MRT ride as I had spent all my money and could no longer afford to take a taxi (See Previous Post lol).

Wearing my Captain Canada bib I got a friendly hello from a couple of youngsters who told me they have read my blog. I guess I now know what 15 minutes of fame feels like, and I will tell you there is no better feeling than that before heading out on a long miserable run.

Fast forward 20 minutes and my journey of PAIN begins. Arriving at the baggage check in I was conflicted with a very tough decision as we were getting close to flag off time and the baggage line was longggggg. I had made a grave mistake and had eaten a burrito for lunch the day before so the PAIN of either waiting in line for baggage and risk… You know what happening.. or going to the equally long toilet line and risk being late for flag off toyed with my emotions. Luckily I was with a couple of my dear friends who decided not not make me suffer and off to the toilet queue I went.

A little tip for all of you.. If you do need to do a pre race number 2 always line up behind a female to increase your odds of a cleaner toilet seat.. just saying… Anyways fast forward to the 8km mark and PAIN # 2 strikes.. Again El Chapo Guzman came back to play games with my stomach and I found myself running to the washroom underneath the pit for a “Speedy Gonzales”. Now you may think this is the PAIN I am talking about, but this is not the case. The PAIN I am talking about was the fact that there was an equivalent of 8 squares of tissue to assist in my sanitary needs. Again toying with my emotions I am glad for an innate learned ability of problem solving. I hope none of you have ever found yourself in a similar situation.. Ever..

Now things were moving along quite smoothly and I actually thought that may be the end of my PAIN and suffering, and I may have nothing to contribute to Just Run Lah again this week. Well was I mistaken. Let’s jump ahead to 22km and the next level of PAIN.. I love the fact this event had a crowd and volunteers cheering. This is the first event I have run in Singaporewith a great vibe to it…. I think however this was a ploy to bait me into a Booby trap and the SCM organizers playing the antagonist in my day. As I was enjoying high fiving all the “High Five” signs I proceeded to high five a broken sign with staples sticking out. Tetanus is Captain Canada’s kryptonite apparently (see pic below).

So here I am with a hand bleeding and talk about throwing salt on the wound (Literally as I was sweating like the Cho Angmoh I am) the next PAIN reared it’s ugly head…. HEATTTTTT……. I wrote about this in my first post and I will tell you I would like to reiterate the fact that Canadian Sweat is that of maple syrup and it felt as if my shoes were sticking to the ground with every step I took…. Or…… maybe that is because they were melting in the oven I was running in haha. This pain unfortunately lasted with me the rest of the race.

From 35km all the way to the finish line I was introduced to a PAIN I have never felt before being a fake superhero and all…. “Embarrassment”  LOL. I have never thought in my life I would meet such a worthy competitor in an 80 year old Angmoh bent on seeing me lose to him lol. My poor legs are hating me for it today, but the look on this fine gentleman’s face as we continuously passed each other was priceless. See emoti pic below and tell me that you would want to lose to this?? hahah So As I cross the finish line in a personal worst (At least I had one personal victory… I beat my nemesis) All the PAIN came to an end……… Just Kidding…… It only just began.. After getting into the Padang in search of shade my aching legs decided to give out landing me into the fence and knocking it over haha. Luckily only 10,000 people saw this… not embarrassing at all.

One victory I did have was somehow I managed to get a free massage and food from one of the corporate sponsors… In the words of Charlie Sheen…. “Winning” (Pic below is the unnamed booth which we hijacked for free food and massage haha)

Now the great baggage search began. I met a guy who knew a guy who spoke to a guy that said the baggage was at the Floating Platform… Floating Platform?? Floating Platform??? This was the point in time that my final PAIN set in.. What is it you ask… Well I fell asleep during the movie the maze runner, but I am guessing it is something that those guys who went in to the maze looking for the exit experienced 😛

After about 30 minutes of playing Where’s Waldo we finally found our bags and enjoyed a cold beer and hurricane Standard Charter walking back from Boat Quay. My final words are this.. PAIN is Temporary, but the memories last forever… and “Live Love Run Beer”