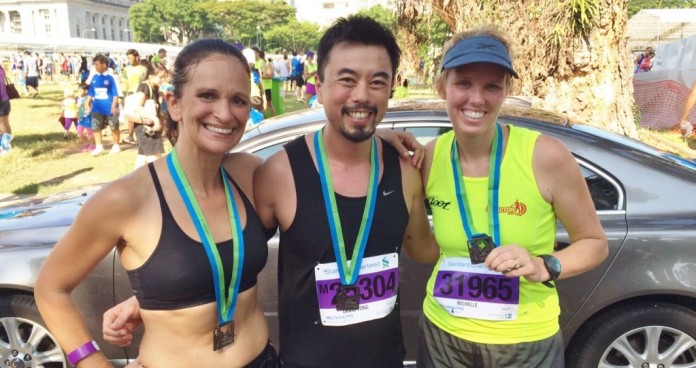 As I sit with my throbbing feet up, I am reminiscing about this morning’s SCMS event.  Having had the worst run so far, I am not the least bit surprised. Returning recently from a 40th birthday party bash in Boracay, Philippines, my training suffered significantly (meaning I didn’t do any).  As the race day loomed my strategy suddenly became simple.  Survive.  Walk if I must and walked I did for a lot of it.

The morning started off well enough.  Along with fellow neighbours, we arrived early enough to enjoy the atmosphere and the breaking dawn.  By 7.00am we were established on the Esplanade Bridge waiting for the countdown.  One thing I have a lot of fun with at any racing event is taking pics of the endless sea of participants.  Last month it was all red at GEWR, today a sea of blue with the lovely CBD in the background.

As the gun goes off the crowd slowly spills over the Start line but it’s a bottle neck and difficult to break through until the space opens at the F1 Pitstop.  From there it’s smooth sailing with plenty of drinking stations along the way and reasonably good weather.  Slight clouding has kept the sun at bay, making the distance easier to bare.

I intentionally took off at a slower pace hoping it would carry me through most of the run.  Unfortunatley, my lack of training for this event made it impossible to get past my aching legs, particularly my ankles so I found myself barely making it to 3km and having to walk.  “Oh man, this was going to be a long race,” played in my head.  However, given that I was prepared for this kind of eventuality, I took it in stride and just kept going forward.

Sadly, I also forgot my headphones at home which meant it was a very silent run.  No Daddy Yankee, no Pitbull, no Coolio, no Wisin, no Urban Latin music was going to blare in my ears to keep me going.  It was just me and the voices in my head and yes, the voices won often.  However, on an upside, it made me more aware of my surroundings and mostly peaceful except for the occasional Darth Vader breather passing me by and pulling me out of my trance.

As I reached the 7km mark, I check in with hubby to let him know I’m likely to make it back in time for the Kids Dash.  He has two kids in different categories and needed me to make it back in time.  I pulled off the road to enjoy the view as I rested temporarily.  Given that there were 16,000+ participants in this category it was not surprising to still see them coming on the opposite side of the road.

With only 3km to go I was inspired to pick up the pace again and whilst I barely kept the pace below 8min/km, I pushed on for 2km, walked 500m and then took the last 500m home.  I loved the big signs counting down each 100m, the familiarity of City Hall and I was relieved to cross that finish line.  Not my best run but there’s always another year, another race, another time to try again.  Tip to myself though – don’t party too hard before a major race.  Noted.

Whilst I’m making my way through the 10km, my fellow Team Costa members are tackling their half marathon from Sentosa Island.  Certainly not lacking in fun, a quick pic with Grover from Sesame Street added to the day’s spunk, especially since the AYE segment was lengthy and uninspiring.

Suffering an injury at the 10km mark Chelle found herself having to push through the next 11km.  Usually that’s when you find out what you’re made of.  Do you yield and withdraw from the race or harness all that you have and carry on through the pain.  For Chelle quitting is not an option and Tiger Balm was sought at every opportunity for injury management.  Chelle’s highlights were running through Sentosa even though hilly and Universal Studios where she met Grover and other Madagascar characters.

David on the other hand had a very good race today by shaving off 20min from his last attempt.  In his own words:

“The motivation I get from seeing everybody on the team go for bigger and bolder goals is awesome. Go Team Costa!”

For Stan this race was a culmination of months of effort, of 5am runs up and down East Coast Park that may have been slightly marred by the fact that he was at the same 40th birthday bash and wasn’t able to sustain the training as a lead up to today’s event.  However, here’s his take on his experience today:

“I was aiming for a 5:45/km race and thought I could keep it up through the Sentosa hills.  That was a big mistake, better strategy would be to take it easier through those hills and speed up on the flats later.  By the time I got out of Sentosa I was spent.  But overall I loved the race, with it’s great organizers able to pull it off with this many people participating.  Next year I’ll be prepared!”

My daughter, Trinity’s running debut was the 2013 SCMS when she was just 5 years old.  We had so much fun that it set us on a new path in 2014, searching for kids races.  Since then she has completed the 2.5km Jurong Lake Run, SAFFRA Father & Child, NorthPassion Run, culminating to the 2014 SCMS.  Together with her friend Justin (Chelle’s 7 yo son), they tackled the 930m course (yes it’s longer than advertised but it was well worth it) at their best speeds.  Justin gave my hubby a run for his money by keeping a pace of 6.11/km, whilst I hobbled behind my daughter at 6.54/km (in my mind begging to stop; I didn’t want to take another step).

As junior Team Costans, they are the new generation of athletes.  Best described by SCMS this “race is designed to encourage kids to participate in a running event and take up the sport while they are young. Kids are encouraged to come out, have fun, and experience the festivities and be part of this momentous occasion”.  Setting an example as parents by participating in adult events, the kids are inspired to participate in their own age related events.  Keep the races coming Singapore. Very simply said about the marathon as articulated by the only marathon runner in our group: “it’s a race, you have to suck it up”.  Enough said.

And on that note, me and my throbbing feet will hang up the keyboard for another day and farewell SCMS for another year.  For me the SCMS is the final event for 2014.  My runners need time out from racing, so I may indulge in the upcoming festivities.  The new year promises lots of fun races that include running events, an obstacle course race, the Tri Factor series, the Green Corridor run, my first running event in Australia and that’s just the first 8 months.