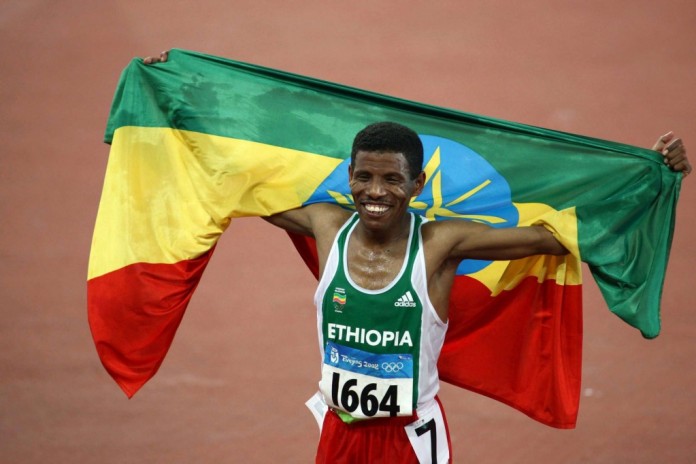 The man is here in Singapore this weekend, he’s running Stan Chart with us all on Sunday.

So I thought it would be great to finish the series of running heroes with a real legend of the long distance scene.

Haile was born in 1973, one of ten children in Asella, Ethiopia. Legend has it he ran 10k each way to school as a boy, which contributed to his unique crooked left arm runnign style, apparently due to carrying books to school as he ran.

Not much has been recorded about his childhood, but aged 18 he won the 5k and 10k at the Youth World Championships – this set the tone for a glittering 1990’s, when he won 4 world championships and 2 olympic gold’s at 10,000m and was pretty much unbeatable over 5000 and 10,000 metres.

At the grand old age of 31, Haile did what many of us do in our thirties – he started road running, specifically marathoning.

Except unlike us, he started at the top – and stayed there.

Haile and I have one thing in common……we both made our marathon debut in the 2002 London Marathon. That’s where the similarities end though, whilst I was very happy with 3:32 and something like 2000th place, Haile was finishing 1 hour and 26 minutes ahead of me, in 3rd place.

He then won 9 Global Marathons over the next 8 years, winning the Berlin Marathon a record 4 times and setting a then World Record of 2:03:59 aong the way.

Eventually, time has caught up with Haile and he isnt winning marathons any longer, but he is still keeping the young guys honest and can still run a sub 2:06 at the age of 40.

What next for Haile? “A lot of messages in the news about me going into politics. Yes, I want to be in the parliament in 2015 to help my country to move forward.”

There’s no doubt in my mind he will be successful.

Meanwhile, Haile and I will do another race together this weekend, although I’ll be sticking to the 42k while he steps down to the 10k.

That’s the end of my series, I hope you have enjoyed reading about my running heroes, Pre, Steve Ovett and Haile Gebreselassie – all individuals, all talents, all amazingly inspirational!

Good luck to everyone running on Sunday, may the force be with you.