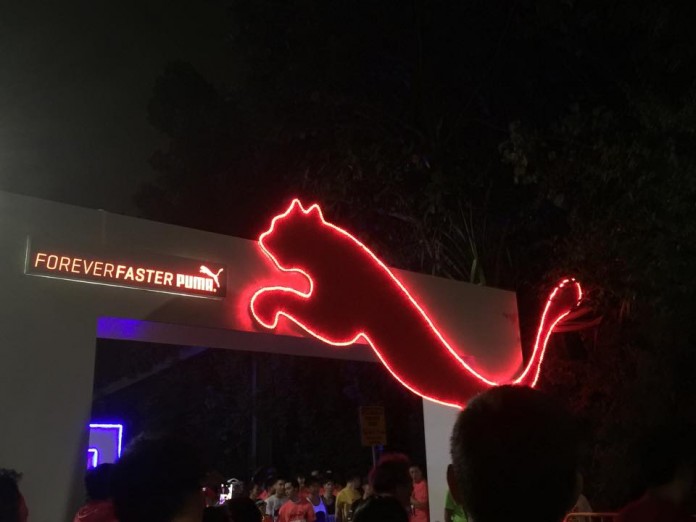 A new Night Run in Singapore!

Sundown Marathon used to be the only “night race” in Singapore. In recent times, there were more of such runs. One example is the Illumi run.

This race is Puma’s first running event in Singapore. I understand the Puma running club in Malaysia is pretty established and thus it was great to witness a sports brand holding a run in Singapore especially after Adidas and Nike pull the plug on their respective hosted runs this year.

Setting its sights in Sentosa, the key attractions to this run is obviously running in the night and “running areas in Sentosa never ran before“. For a typical tourist, Sentosa is pancake flat. However the same couldn’t be said for race routes; be prepared to go past never-ending hills and expect a challenging race.

Puma night run did not disappoint in that respect. Seriously I have no idea where I was running. But in summary the two km was pretty flat. Thereafter it was either ups or downs all the way till the final km. The baggage deposit was placed strategically on the upper levels. I though that was a brilliant idea to ensure proper flow of runners! I did not deposit any baggage, hopefully collection was a breeze!

When i reached the start point, i was 15mins away from flag off. The MC was asking all of us to stop our warmups if we want to participate in the first wave.

When i arrived at the pen area, i realized there were no much areas to do any warmup. With that, i did none and walk straight into the pen and squeezed as front as possible. By then, i was jammed 15 rows behind the starting point. Of course, the coolest aspect is to be able to run with your fellow Mediacorp celebrities. Here you could see Sham enjoying himself with their company!

I only knew there were celebrities after flag off where their respective fan clubs stand by and support their celebrities. I believe Elvin Ng was there. His fan club was screaming for his head lol.

And so the race begins!

The first 2km was rather flat and manageable. However there were peeps walking just after the 1km mark, which was disappointing to witness. There were some minor hills on the way to Cove Drive which was still manageable.

The killer came at the 4km mark where there was this mini route of up and down hills. Thereafter at the 6km mark, there was this unique huge “roundabout” of up and downhills. That was pretty manageable as you could see the front runners running uphill while you’re going down, giving you a sense of what to expect.

Once out of there, you are basically on the same route back to where you started. I like how there’s every km marker on this race, a rarity nowadays. The accuracy seemed to be off abit but who would complain about a shorter distance, right? 🙂

I was amazed by the volunteers and the management of the water stations. They are extremely enthusiastic and would take the water out for you before you crash into the station yourself. Though i stood there for few seconds waiting for mine in one particular station, that wasn’t a problem as i knew they tried. I would prefer to be handed water than to pick one myself at running pace! The distance markers looked something like that. Don’t we love the 400m and 200m distance markers? These are the most motivating markers throughout the entire race! Not to mention 400m marker was right smack beside the “Bikini bar” 😛

With 200m left, i give a last surge, lifted my arms and celebrate with joy! While the race comes to an end, the start to the after-party begins!

As the rest of the runners trickles in, there were entertainment planned for everybody.

Free wave rides for runners, concert-liked performances, beer offerings, instant photo booths etc. The aim if to create a party-like atmosphere and i thought this was rather unique for a 10k race! Thumbs up Puma for creating that atmosphere.

Thereafter, i made my way to collect my car. I recall there was a ‘towel’ to be collected, but unfortunately I couldn’t find a booth that says towel collection. With that i walk my way to my car and like the rest, drove out before the crowd came back.

In summary, the good and challenging parts of the race are as follows:

All in all, it was an excellent race for those seeking a challenge and for those whom run best at night instead of mornings! It was short, around 9.7xkm, not sure if that qualify as a pro or con! 😀