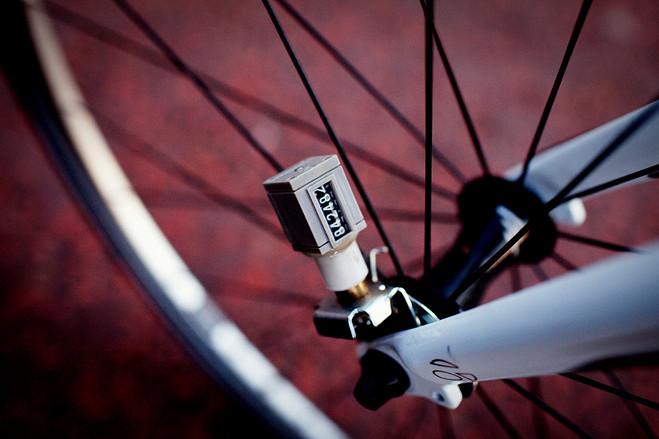 A requirement for precision!

Have you ever wondered how a distance as long as 42.195km can can be precisely measured and validated down to its last meter? IAAF (International Association of Athletics Federations) has adopted the calibrated bicycle method as the only approved method for measuring road races. In this method, a simple geared device known as The Jones Counter, which counts the revolutions of a bicycle wheel is used.  The measuring procedure is outlined below.

A Jones Counter  is mounted at the hub of the bicycle’s front wheel. It is important to understand that this device does not measure distance directly. It measures the revolutions and part- revolutions of the bicycle (front) wheel. Current models of the Jones Counter have a gearing through which they register 260/11 counts (23.6363) for each revolution of the wheel. Because the circumference of bicycle wheels normally used in measurement is about 2.1m, this means that each count represents approximately 9cm on the ground.

The following eight steps are necessary to measure a road race course:

2. Select and measure a calibration course.

A calibration course is an accurately measured base line used to calibrate the bicycle. It will be straight, paved, level and on a lightly-travelled section of road, free of parked vehicles. It should be at least 300m in length, and a length of 500m is recommended. For every one road race course measure, the calibration course must be covered eight times (four times before the measurement and four times afterwards), and in both directions.The standard method of measuring a calibration course is with a steel tape. Any steel tape may be used but to be confident of accuracy use a tape made by a well-known manufacturer of surveying and construction equipment, with temperature and tension specifications (usually 20C, 50N) printed on the blade of the tape. The tape must be at least 30m long.

3. Calibrate the bicycle on the calibration course.

The aim in calibrating the bicycle before doing the road race course measurement is to calculate the number of counts registered on the Jones counter for every kilometre ridden on the bike. This figure is called the working constant.

Measurement begins at either starting point or finishing line, depending on which one is fixed by the organiser. It is important to ride the shortest possible route (see below), ensuring that all runners will run at least the declared race distance.

5. Re-calibrate the bicycle on the calibration course.

6. Calculate the length of the road race course.

To calculate the length of the road race course, you must first calculate the Constant for the Day. This is the average of the working constant and finish constant. Calculate it by adding those constants and dividing by two. The next step is to calculate the total number of counts recorded in riding the shortest possible route between the start and finish along the prescribed race route. This figure is then divided by the constant for the day. The result obtained is the length of the road race course.

It it likely that it will be needed to add or subtract some distance to make the road race course the desired length. Depending on the configuration of the race course, adjustments can be made at the start, at the finish, or at a turnaround point. If more radical adjustments are required, like re-routing along different roads, then these will have to be done using the calibrated bicycle.

The documentation must be sufficient to allow the course to be checked in the event of a re-measurement being required (as mandated, for example, after a world best performance has been set). Paint on the road is not enough. Within the documentation the organiser must include a map of the road race course which is clear enough to allow the race director to re-establish the course even if the roads were re-surfaced.

The actual path of any given runner is irrelevant. The shortest possible route is theoretically well-defined and unambiguous. Defining a road race course in this way ensures that all runners will run at least the declared race distance.

Imagine how a stretched string would fit within the boundaries of the course. Follow that imaginary string when you measure. Runners may swing wide to take corners but do not attempt to measure what you think they will do. The exact SPR is the proper route to follow. Measuring the SPR means hugging the inside edges of bends. The path you should attempt to measure officially lies 30cm from the kerb or other solid boundaries to the running surface. Attempt to maintain this distance on bends and at corners. On stretches between bends the SPR takes the shortest possible straight path. It will cross from one side of the road to the other, whenever necessary, to minimise the distance. The shortest possible route in various different road configurations is shown below: