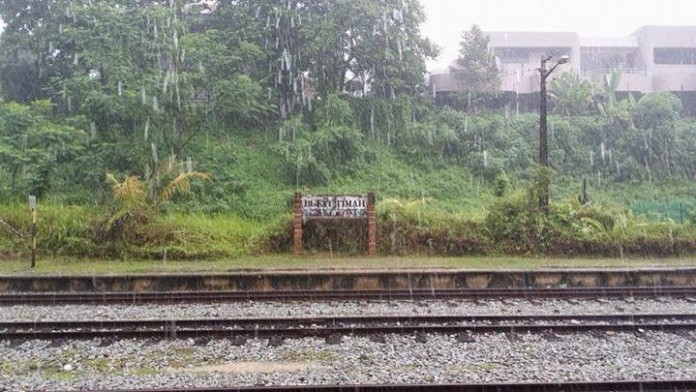 I decided that I’d train through this race, instead of taking a few days out before the race as usual. So I did a long run on tuesday (vesak day), some interval work on thursday and a macritchie loop on saturday morning ahead of the Green Corridor Run on Sunday morning. This kept my week total up around the 50k mark

So I wasnt quite sure what this would mean for my performance on the day – but was keen to find out if the recent higher mileage weeks would be good base, or give me legs to tired to race.

The Mount Sinai Striders were out in force today, with :

Neil , Pete, Pete’s mate Rob and Jo.  Neil and Rob not around when we took the mandatory Sinai Striders pre race pic

This year, wave one was an 0900 flag off, one of the positives of the complaints from local residents after last year was that there was no MC or music at the start of the race, just one guy (not the idiot DJ from 98 FM) talking quietly for a few minutes

After a short delay, we got started just before 0910. I was about 70-80 people from the start and had a solid uneventful first few kilometres. I remember last year falling in a effort to overtake a bunch of people too early, this year I was determined to bide my time and go through when the opportunity arose on the trail.

Despite the wet, the trail was (I thought) in very good condition, it’s only really on the section after Holland Road where there are more mountain bikers using the trail to get to Bukit Timah that it churns up a bit. The first section even with a few days of rain was really very smooth. My preferred puddle technique on a trail is just to run straight through them – they are rarely deeper than a few inches, especially in the middle of a trail. This served me well yesterday and I was able to overtake many people as they took uneccesary detours around the edge of the trail.

Good pace and through 2k in around 9 minutes, with 5k passing in around 22.45. I then had my customary slight dip at 6-7k (actually not a dip in pace interestingly, just a dip in mood!). This I think is around 6.5k (at Buona Vista).

Got to around 8k and was starting to pick off runners in the groups ahead, definitely feeling strong – although since my wife and daughter think I look ‘at least 60’ in this pic, perhaps I didnt look as good as I felt.

Anyway, soon enough we were at the 9k mark, where I started to debate with myself when I should kick on. Decided not to go at 9, nor 9.5, eventually went at 10k, which proved too late as the supposed 600m was actually less than 400, so I wasted the opportunity to go earlier.

Great race, perfect conditions for trail running when I was out there. At the finish I met Neil, who finished 9 seconds and 6 places ahead of me – yet somehow we hadn’t seen each other the whole race.

As we were waiting for Pete the heavens opened and a torrential downpour began that lasted at least an hour. This is the finish area, taken from the drinks tent

We ended up running back to Mount Sinai, so all in all around 14k for the day

I REALLY like this race, it’s simple, well managed, very ‘un corporate’ and a reminder (for me) of what races used to be like.

Next up is the Sundown Marathon on May 31st!

Finally  – big shout out to the volunteers and photographers who sat out in the rain all morning! Kudos!

I hope everyone that did the green corridor had a great time, and hope to see you all again next year.

There’s plenty of room on the busy Singapore race calendar for this unique, simple trail run.