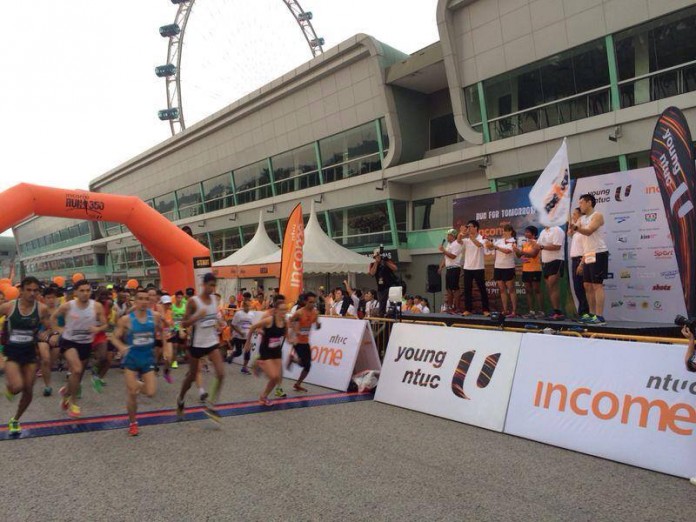 Singapore, 27 April 2014 – Early this morning, Southeast Asia’s premier eco-run, NTUC Income RUN 350, Organised by Young NTUC saw a record number of over 12,000 runners, more than 500 volunteers and 21 partners come together in support of the global 350 movement. The fifth edition of the race welcomed participants from 64 different countries who ran for a greener tomorrow.

Mr Lim Swee Say, Secretary-General of NTUC, was present to award the winners in the respective categories. RUN 350 saw runners participating in two categories – the 10km run and the 350m Kids Dash.

Held at the F1 Pit Building, RUN 350 aims to raise awareness of the climate crisis facing our Mother Earth. The atmospheric carbon dioxide level currently stands at 400 parts per million, but the level must be lowered to 350 parts per million in order to preserve our planet.

Dubbed an eco-run, RUN 350 practices eco-friendly initiatives that support their green cause. This year, RUN 350 became the first run in Singapore to introduce its inaugural Medal Recycling Campaign which collected a whopping 6,482 donated medals islandwide. The public was encouraged to donate their old or unwanted medals at collection points islandwide. The medals were then recycled and given a new lease of life to become brand new medals for finishers of this morning’s race.

Mr Steve Tan, Executive Secretary of Young NTUC, said, “What started as a little dream of a group of like-minded young people has become an annual event in the local environmental grid and local sporting calendar. RUN 350 has taken off far beyond our wildest imagination and we thank everyone involved in this year’s event for helping us to make our dream a reality. Today, we witnessed over 12,000 runners participate in RUN 350. We surpassed last year’s record number of participants and it is gratifying to see so many people come together to support a movement that affects our Mother Earth. At Young NTUC, we represent, advocate and mobilise when a cause calls for it, and RUN 350 was realised on behalf of the 350 movement. We thank you for joining us in our effort to raise awareness for a greener tomorrow.”

In addition to the Medal Recycling Campaign, RUN 350 embarked on many green initiatives this year including encouraging participants to partake in the Bring-Your- Own-Bottle (BYOB) initiative to training runs as well as to the actual race. The effort helped to reduce the use of disposable plastic bottles and paper cups. On-site, there were over 200 bicycle racks available for participants who chose to cycle to the race venue. Eco-partners also set up booths to showcase their various causes such as 350 Singapore, Save That Pen, ECO Singapore and Ground-Up Initiative.

Mr Marcus Chew, Vice President, Strategic Marketing, NTUC Income said, “NTUC Income RUN 350 drives the message of environmental sustainability, which is consistent with NTUC Income’s belief in a greener future. As the title sponsor for four years running, NTUC Income is proud to partner Young NTUC in furthering the 350 Movement. The record turnout this year and the public’s enthusiastic participation in the Medal Recycling Campaign leading up to the Run are evidence that support of the

350 Movement is gathering momentum. NTUC Income is glad to play a part in creating a better tomorrow for our loved ones.”

Unionists from the Labour Movement also took to the road at RUN 350 as part of the annual inter-union sports tournament, the U Games, which is now in its sixth year. “U Sports is glad to be part of this eco-run where members from different unions could race in friendly competition while showing their support to the cause and our environment,” said Mr Yeo Khee Leng, Chief Executive Officer, NTUC Club.