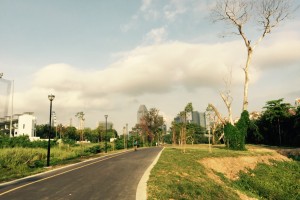 If East Coast Park is one of your familiar running haunts, you’re probably in the habit of starting off at East Coast carpark B1 and heading left, towards Big Splash, and adding on the miles in the direction of East Coast Seafood Centre or the East Coast Lagoon Food Village. However, with a brand new running route now available, you can break the monotony and enjoy a different scenery on your next East Coast Park run.

From the East Coast carpark B1, you can now turn right and head towards Gardens by the Bay (Bay East), by crossing the bridge at the Ford Road roundabout. From there, you will be running parallel to the East Coast Parkway (ECP). The path turns a little as it approaches the Marina Golf Course, but don’t worry, you’re not lost. Keep on the track, which will eventually take you to the Visitor Centre of Gardens by the Bay (Bay East).

From there, you may wish to continue on to Gardens by the Bay East by crossing the Marina Bridge and up onto Marina Barrage. This comes up to approximately 5km, or 10km as an out-and-back route. If you want to further extend your run, consider our recommended Marina Bay Route, which takes you along one of the most scenic routes in Singapore.

You can reach East Coast Park using the park connectors:

You can reach Gardens by the Bay (Bay East) using the park connectors:

If you intend to start your run at the Barrage, the closest MRT station is Bayfront (CE1).

Shower information:
At East Coast Park: there's a public locker room for you to shower. It costs 50 cents to enter, and is located within walking distance of the 24-hour McDonald's.


Share this route with your buddies
Our database has
7233
listed events.
Get tickets