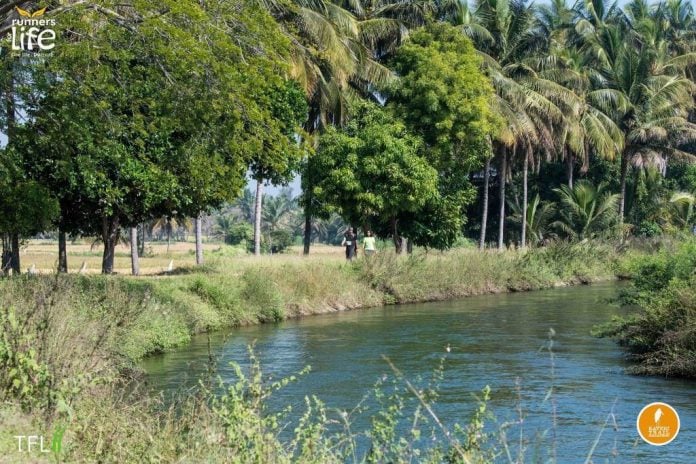 The Kaveri River trail allows a runner to explore pristine nature. The trail follows the serpentine canal of river Kaveri, worshipped as a goddess in South India. The run starts near the Ranganathittu bird sanctuary, around 15kms from Mysore. It is a loop run and the route is dotted by green paddy fields, sugarcane plantations and coconut trees. From time to time, the birds from the sanctuary make an impromptu appearance to cheer the tired runner.

Ever since I started running, I have always wanted to experience the Kaveri River Trail. It sounded too good to be true in a rapidly urbanizing India and appeared way different from the city road races. After the highs of running in Ladakh in September 2019, I wanted to follow up with a run that would give me the same exhilaration that I had experienced while running in the cold desert.

The overnight bus from Pune to Mysore was tiring and I thanked myself when I checked into the quaint Green Hotel situated in a leafy neighbourhood. Its green lawns, white dinner table juxtaposed with green napkins and its laid back demeanour was just what the doctor had ordered. After a hearty meal, I sank into a deep slumber to allow my body to recover from the long work week and the overnight bus journey.

Since I had to collect my bib and the race T-shirt, I went to the venue early. It was pitch dark and there was a chill in the air. As I was collecting my goodie bag, the birds from the adjoining sanctuary decided to do their bit to welcome the runners. What started as the chirping of the night birds soon evolved into a cacophony of noise as the sun started coming up. Unlike the city marathons, space was abundant for the runners and I decided to do a slow warm-up.  Apart from the occasional conversation of the few other runners who decided to do a slow warm-up well ahead of the start time, there was an eerie silence. The birds seemed to understand that they had 700+ runners for company at an unusual time in the morning and decided to go silent. It was almost surreal and the 500-meter loop from the starting line to the entrance of the bird sanctuary appeared to be the quintessential ‘stairway to heaven’.

The half marathon started at 6:45 am. The cool breeze from the canal, the gentle rays of the early morning sun and the greenery that came up after the first few hundred meters made it a perfect setting. However, going by my previous experience of visiting Mysore, I knew that the scorching sun will soon make its presence felt. I decided to run hard for the first 10kms and see how I cope up for the remaining 11. The trail with the red soil against the backdrop of a clear blue sky made it a run to remember. The event was superbly organized and every two km there was a well-stocked water station. And what I liked most was the clear sign of kms completed by both half and full marathoners. What made it extra special was the complete absence of vehicles. We came across the local villagers and their bullock carts once in a while and they happily waved back to us. It seemed they were happy to share the trail with the runners for a day.

At the 10.5 km roundabout, I realized that the race was going to get harder. The sun was now on us. It was literally on our face and I wished I had got my shades. While the contact lens has been a trusted friend for ages, I have realized that the combination of sun and sweat can have an unsettling effect. I trudged along nevertheless as the trail which appeared smooth and easy an hour ago transformed into a harsh terrain dotted with pebbles and small stones.

I decided to rehydrate at alternative water stations and apply the cooling sponges from time to time. The volunteers at the stations helped us overcome moments of self-doubt through their kind words of encouragement and smiling faces. And, not before long I could see the finish line. Due to the serpentine nature, the trail allows you to have a clear view of what lies ahead. I decided to push myself a bit and finished the race with a big smile.

The Kaveri River Trail allows you to run on a trail that is still untouched by the perils of urbanization. The trail is quite magical albeit very tough especially when the scorching sun is on you. It is a must-participate event for those who enjoy getting immersed in nature during a run. Superbly organized and heartily supported by the locals and the birds from the sanctuary, it leaves you feeling refreshed as you head back to resume your life in the cities.