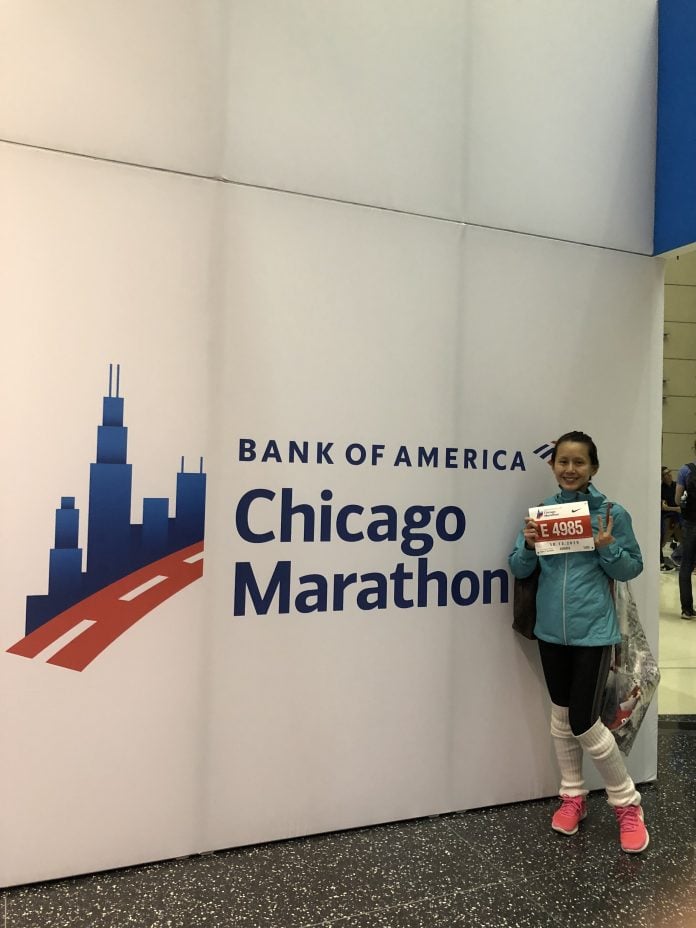 It’s about two weeks since the 13th October 2019 where I did my third star world majors.  Travelling all the way to Chicago.  The idea of going to the USA since my last trip in 1997 to New York, where the Twin Towers were still alive, was really surreal.  But I made the decision to go after I lost the ballot for the London Marathon, and as I crossed my fingers hoping that I get the ballot this year, I didn’t.

The race as usual like many other majors requires balloting. Most majors have the same way of entrance, either you ballot or you are so fast that you can qualify a timing, the last options is not something that Singaporeans like to do is Charity fundraising slots.

Balloting actually starts last year, If I could remember was around Nov.  Results came in early this year, I was lucky to get the ballot.  So comes all the preparations to Chicago.

Although I will say East Coast US is pretty old and rundown now.  But still retaining its old charms.  The hotels around the race start and end, Grant Park, gets very expensive during the race weekend.  As such, I went for AirBnB and stayed with a couple Mike and Veron.  They have been hosting AirBnB room for a few years and their house is very cosy.  I get all the things I want and if I forget to bring something, I did not have to go and buy.  That is the beauty of AirBnB.

The race pack collection expo is another mega one.  But compared to the one in Tokyo and Berlin, I kinda felt it was smaller.  Berlin was really massive taking up the whole of and old airport.  It was held at the exhibition area in McCormick Place.  The usual stuff, athletic wear, running gears and accessories.  Besides the loud and crazy Nike booth which sells the official running gear for this event, there were many nice goods for the race, but I found them quite steep.  The Goose Island Beer booth is something not to be missed, giving out free taster beer and selling some of their brand items like the Marathon Beer pint glass, tee shirts and caps.

Runners were given their baggage drop bag plastic bag and the event tee shirt, you can change the tee shirt on the spot if it does not fit you.

The start and end is at the Grant Park in the downtown of Chicago.  Managed to stay one night with my friend, Jean Wong at the Hyatt Regency, the good thing was they had shuttle bus to bring runners to the start point, so the transportation portion was saved.

Many said that this race can be warm or cold depending on the year.  This year it was quite cold at the start, but the sun came out towards the end.  Maybe it is a good news for me.  But to those used to running in the colder climate, finds it kind of too hot for comfort.

The race course is very straight forward and I must say throughout the whole course, it was really flat.  Being my third major, I find it much more friendly than Berlin and well organised.  There were turns, but the turns were not choke points, in fact having so many participants every year, I have never heard anyone complained that there were choke points.

Besides the well stocked up water points with water and Gatorade, the good thing about  the water points is that about 200m-300m before them, there will be a sign to say the water point is ahead.  Some stations had bananas and also energy gels.  But what hits me best is the beer point at 38km, weather was really getting hot and just as I thought I saw wrongly, the Goose Island Beer point was there serving fresh cold icy beer! Really a treat.

You also get volunteers cheering you along the way from both side of the road.  Being a cosmopolitan city, Chicago has many different area of ethnicity.  This is where you get to experience the different sides of the city like you get drag queens cheering you at Boys’ Town, dragon dance at the Chinatown.

To end this wonderful 26.2 miles, you get to run down the famous Magnificent Mile, something like the Orchard Road of Singapore, with more supporters and cheering to push you through to the end point back in Grant park.

Besides the photos ( you need to buy and best is to purchase beforehand for this as you can save more ), runners get tons of goodies from the sponsors like replenishment bag from Mariano’s, local supermarket, with energy bar and protein bars, apple sauce.  Water and Gatorade, of course the 26.2, special canned 312 beer by Goose Island ( it was free flow big cans at the finishing line).  Runners can keep themselves warm with the special foil warmer sheet printed with the Chicago Marathon words and logo, and also the finisher medal.  Post race party by another official partner, Biofreeze, was just nearby and you can get another free pint of beer there with many food trucks.  Of course, if you are willing to wait, the physiotherapy tent was there too to give a good rub down. 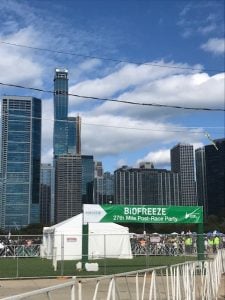 I must say after my failed attempt in Berlin to go below sub 4, I managed to clear it this time.  Maybe due to the absence of stress from my parents where I had to take care of them in Berlin.  But travelling alone to a faraway place sometimes do get a bit lonesome.  I had very good experience with this race as it was really well organised, and despite so many participants and supporters, there was no chaos.  Everything moved on smoothly.  The only choke point was the bag check at the starting line, and I suggest to go at least 1 and half hours before your start corral to get ready at the start line snug and well.  For those going in the future editions, I am sure you will enjoy this race and what the city of Chicago has to offer (in my case, the wonderful delicious beer!)