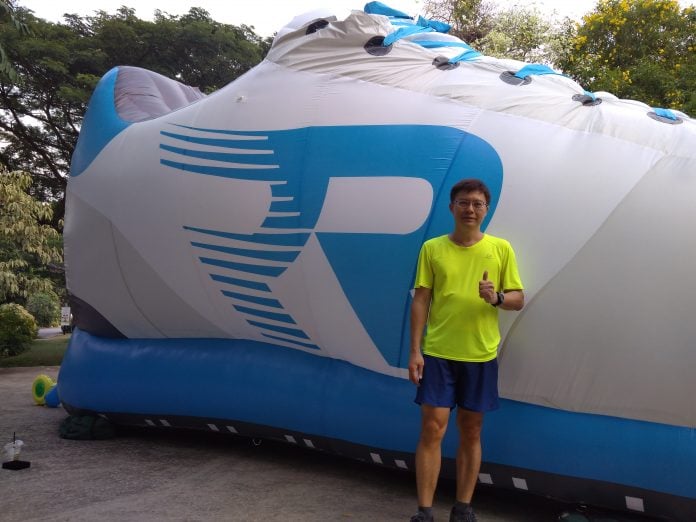 Ridge Runners is a fellowship, or rather a community of runners, who met every Sunday morning for runs at the Southern Ridges, which are: Mount Faber Park, Telok Blangah Hill Park, HortPark, Kent Ridge Park and Labrador Nature Reserves.

The key members of the community organized a run on the 25 August to celebrate their 7th anniversary. This run was free and open to the public and there were 2 categories: 21 km and 10 km.

I had always wanted to run the Southern Ridges, but lack the motivation to go there as I feel they are not very accessible. This was why I was glad to come across this event as it gave me a reason to make an effort to travel there. Hence, I registered for the 10 km run.

At 6.10 am, I took the 1st train at Bedok North (Downtown Line) and changed to Northeast Line at Chinatown to Harbourfront. From Harbourfront, I changed to Circle Line and alighted at Labrador Park. By then, it was near 7 am. I decided to take a slow walk to HortPark as there was still time before the flag-off at 7.30 am.

It must have been years since I came to this part of Singapore as I used to visit some customers at Alexandra Techno Park (ATP). The offices were practically deserted on a Sunday morning. I took a tun to HortPark walking along Alexandra Road. It was only after the run when I walked back to Labrador Park MRT that I realised there was a short cut out from HortPark to the main road via the ATP Underpass. Readers may want to take note. 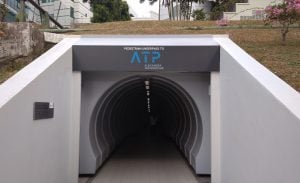 The race venue was at the ‘Hands-On House’ in the HortPark. Initially, I had a problem locating this place as I was not familiar with HortPark and had at most visited the HortCentre. I arrived just in time at 7.30 am. and commenced my run after some stretching.

Ridge Runners use their own apps to track their runs at the Southern Ridges. Hence for this anniversary run, participants had to install their apps and track the run in order to prove the distance completed and entitled to the finisher medal. The app is quite similar to Strava or Runkeeper, except that it could only be used in the designated routes in the apps.

The start of the route brought us to the residential estate outside Hortpark. The gentle slopes here served as a warm-up to the subsequent ones at the hills. The organizers had pasted arrows on the ground to provide directions to the runners. I can only imagine the tedious work of doing this and removing them after the race. 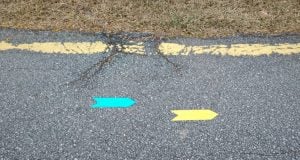 After a while, we reached the Alexandra Arch and began to negotiate the Forest Walk. I had walked above this forest canopy a couple of times but today was definitely my first run here. 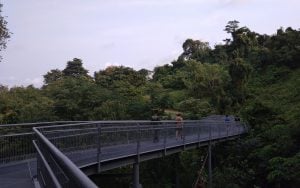 The gentle slopes up to Henderson Waves were still manageable and before long I hit the hydration point. Two volunteers were handing out mineral water and 100 Plus to the runners. I stopped to drink before continuing up Mount Faber. It was with a mix of run and walk that I overcame Mount Faber and began to retrace my steps to HortPark. 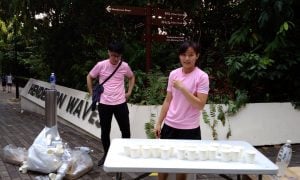 There were more gradual downslopes on the return journey and I certainly found it easier and faster. Before I knew it, I had put Forest Walk behind me. I ran at a faster pace on the remaining 1 km and reached the Finish Point back at HortPark, feeling relaxed and satisfied.

I showed a volunteer the distance completed and collected the finisher medal. The medal is beautifully designed, heavy and came in a box. It must be one of the best medals in my collection. In addition, runners were provided 100 Plus, muffins, ice milo and kaya toast. 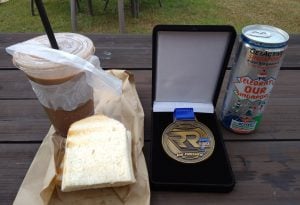 It was amazing how generous the organizers were in giving out these freebies as the race was free! It just showed the tremendous pride they have in their Ridge Runners community.

I took some rest, before taking a group photo and slowly made my way home.

On a final note, I would like to wish Ridge Runners a Very Happy 7th Anniversary!

Disclaimer: JustRunLah! members can maintain personal blogs and post articles such as the present. All messages, articles, and any opinions, advice, statements or other information contained in these posts or transmitted via JustRunLah! channels are the responsibility of the respective authors and not of JustRunLah!, unless JustRunLah! is specifically identified as the author of the message. The fact that a particular message or article is posted on or transmitted using this web site does not mean that JustRunLah! has endorsed that message in any way or verified the accuracy, completeness or usefulness of it. For enquiries please click here to contact us.
Our database has
7056
listed events.
Get tickets