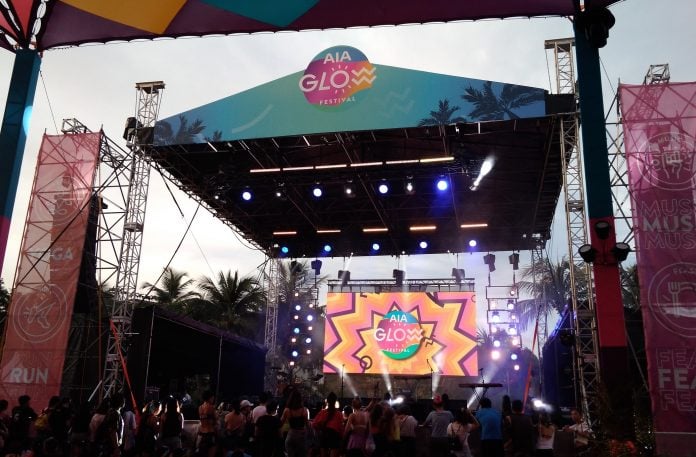 2019 marks AIA’s 100th year in Asia and the inaugural AIA Glow Festival, held on the 25th May in Sentosa. Although AIA has been organizing the Music (Run) Festival for several years, the scale of these events was much smaller than this year’s Glow Festival, which includes a variety of programs, such as Yoga, Healing and Meditation, a 5 km fun run and a music concert.

Doing its share to charity, AIA also donates $ 10 to the AIA Centennial Fund for every Glow-getter who completes the run. I was a past music runner and was given a promo code which entitled me to attend the concert on top of the run. I shared this code with some friends so that they can join me to chill out in this is a fun-filled event.

We chose to collect our race kits at the venue on the event day. We met at 2 pm at Harbourfront and took the free monorail from Vivocity after showing the officials our e-tickets.

It was a carnival at Palawan Green. We collected our race kits, which consist primarily of a headscarf and wristbands for the run and music pass. Groups of participants were attending yoga classes at different tentages and the Grand Cupola. Yoga classes started as early as 8.15 am and it was a joy to watch the yogis performing their stretches seemingly effortlessly. 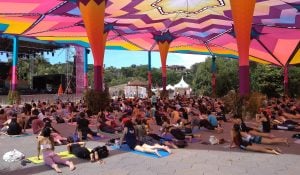 It was a hot afternoon and after exploring the various activities, we found shade and rested until the scheduled fun run at 4 pm. It was a sea of runners and we were flagged off in several waves to avoid congestion. The route was similar to last year’s Music Run, bringing the runners up Imbiah Trail where many preferred to walk due to the upslopes.

It was refreshing to run in Sentosa after a long while, passing some of the landmarks such as the Skyline Luge and Merlion. However, there were also many walkers who did not keep to the left and thus blocking the path of those who wanted to run.

Time passed quickly and before we knew it, we had reached the Finish Point back at Palawan Green. My Runkeeper indicated that the distance covered was 4.48 km, but I guess this didn’t bother us as the objective was to enjoy each others company and the whole event.  We collected our medals and bottled water for hydration. No isotonic drinks or fruits were provided. Perhaps the organizer prefers us to purchase from the food vendors instead.

There are some eateries located just outside Beach Station. We took dinner at Marybrown and returned to the festival site at 6.30 pm. Scores of Glow-getter were enjoying their food purchased from the food vendors. 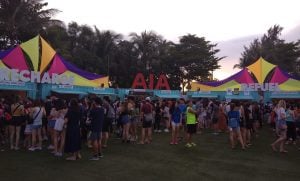 Many like us were resting at the Grand Cupola and waiting for the performance by Nina Nesbitt at 7 pm. Eventually, she made her appearance and entertained the audience with some of her well-known songs. Though I am not into pop culture, I do enjoy seeing the young people enjoying themselves especially to the beat of the music.

We left the festival site at 8 pm. We had enjoyed the event and look forward to next year’s edition. 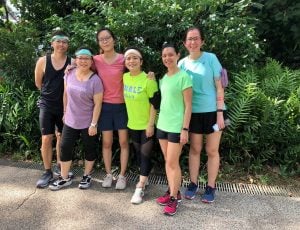 1) There are more activities lined up this year compared to last year. It certainly gives the event a carnival-like feel!

2) For the run element, I must say I preferred last year’s, where I recalled music being played throughout the entire run so that I felt I was running to the beat of the music.

3) This year’s finisher medal consists of a colourful paste-on label. While it looks nice, I am not sure if it will last. One corner of the label on my medal is already slightly peeled off.

The OSIM Sundown Marathon is one of the most popular race in Singapore. With a catchphrase of  ‘Sleep Can Wait’, this event attracts thousands of runners every year to participate in the night run, with the full marathoners running into daybreak.

I only intend to run the FM next year. Hence after considering that I had recently just run the Income Eco and 2XU at F1 Pit, I chose to take part in the 5 km category instead.

I arrived at the race village at 7 pm and it was already teeming with activities. Some participants were practising yoga before the stage. Some were checking out the new OSIM products and kids were playing V.R games. The food stalls were opened and scores of runners were savouring their purchases. 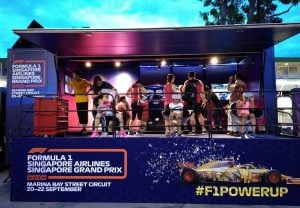 I commenced with the 1st wave of 5 km runners flag-off at 8 pm. The route simply brings the runners to Republic Avenue, turning back at the Golden Mile Complex to continue towards F1 Pit, turning right into Marina Promenade and to the Finish Point. However, before turning to Marina Promenade, I decided to clock more mileage and instead diverted to Republic Avenue to run another loop. By then, the last wave of runners had already passed this stretch and the road was literally emptied.

I managed to catch up with some of the last runners and we ran together to the Finish Point. But I chose to press on towards the Float, before making a turn back to complete the race. My Runkeeper indicated I had run a total of 9 km for this race.

At 9 pm, the race village was extremely crowded, with the 10 km runners waiting to commence their race. I rested a while and enjoy the race ambience before heading home. 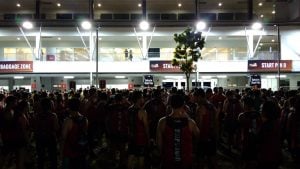 1) I wonder why the whole village was barricaded with only one entry/exit point? It creates a real bottleneck with runners both entering and leaving the premise using the same passageway.

2) The whole village was crowded because there were lots of participants. Perhaps the organizer should have utilised the car parking area as well, just like what 2XU did.

3) I read of the frustrations faced by the HM and FM runners, with issues such as lack of water at hydration stations. I shall not comment here as I did not run their routes, but I hope the organizer could reflect what went wrong to prevent a recurrence in next year’s edition. For runners, hydration and safety factors are most important. A bad race experience will lead the runners to consider twice about signing up, regardless of how excellent the race village activities are or how well the race kits are bundled.