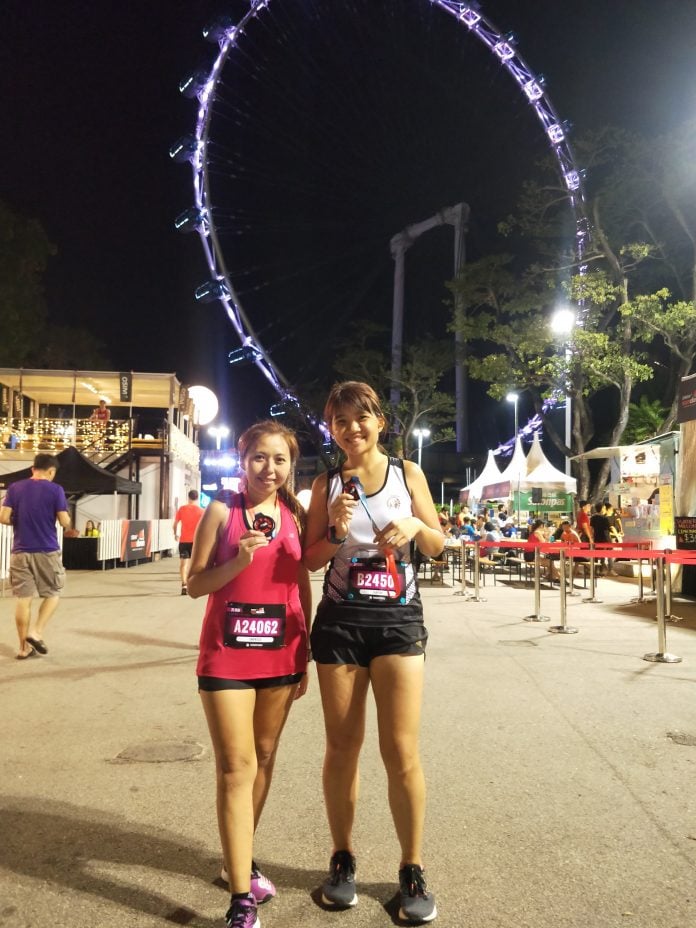 OSIM Sundown Marathon is now one of Singapore’s most popular races. It first started back in 2008 and now then it’s actually gonna expand to China and US this year! Wahhhh… I previously only know there’s Sundown Marathon in Malaysia.

For every paid race slot $1 will be donated to the beneficiaries such as the Singapore Disability Sports Council, the Straits Times School Pocket Money Fund and Running hour. Race slot so expensive, maybe next year Sundown should up the amount of money donated to the beneficiaries? 😁 Runners can also donate money via the official website. Don’t know the exact amount raised for charity but there’s a total of about 25k runners from the various categories! 😍

This year’s Osim Sundown Marathon was under the new managenent of Infinitus Productions, maybe because of the new management, some logistics wasn’t really well done? 🙊 Saw sibeh many complaints on social media 🙈 But honestly, to me the whole race was still alright other than the delayed in flag off and I need to sacrifice my sleep for the race.

This year, I participated in the half marathon category. But really jin hoseh, didn’t do any long distance run after the 16km race 2 weeks prior to this race 😂 I was feeling unwell for the past week or so and I didn’t run much clocking just 4km and 5km runs mostly. 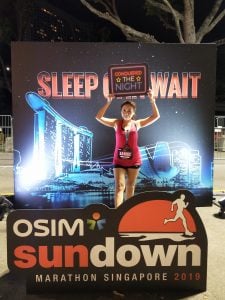 On race day, I took a 2 hour shiok shiok nap at around 6pm and woke up to makan dinner. Genius me that I went for a nap, I didn’t get sleepy throughout the run 😊 Meet up with Eleanor to travel to F1 Pit Building, the race village. We reached about an hour prior to flag off timing and jalan jalan around first before we head to the start pen. And realised there was movie screening! 😍 It was screening the Black Panther, I’ve watched it before so it’s fine that I missed the movie this time. 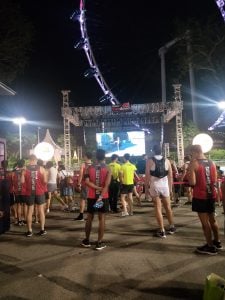 There’s freebies given out such as Salon Pas patches and Osim Towel. I’ll actually chiong like Spartan to get the freebies but I didn’t bring bag at all to deposit so I didn’t take the freebies 😆 I’d already taken them during the race pack collection, so I don’t be greedy ❤ 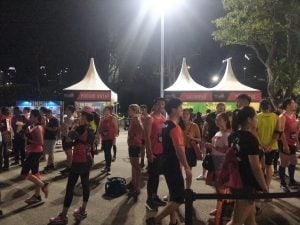 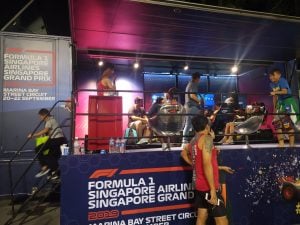 There’s “driving arcade” for a F1 formula racing experience. There was only 2 person in queue in front of me so I queued for it and it’s pretty fun and the route was Singapore’s streets! 😍 Reminds me of those days when I was in primary school, those days when we go to Time Zone and played Daytona. It was fun but before the game ended, I decided to stop playing because sibeh paiseh I got stucked for a long time after I bang the wall and couldn’t turn into the right track 😆 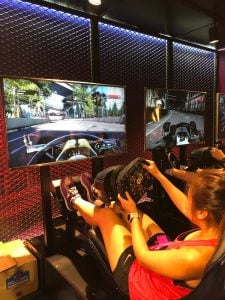 Flag off was supposedly at 11.30am for both the half marathon and full marathon runners but the first flag off was only at 11.45am. It was announced that the delay was due to clearing of obstruction on the route. Didn’t know how do they segregate the flag off time and waves but some runners complained that they waited for 45minutes before they started to run 😨

It’s a super humid night, the first few hundred metres into the run I already started sweating like mad. But it felt so shiok, I love the feeling of sweating a lot! Realised towards the end of the run, just a grab on my clothes and I saw my sweat drips drips drips out 👍

Just 2km into the run, I saw the distance board at the opposite route which will be after our u-turn. I thought the distance board was placed wrongly and not accurately but turns out that we ran the wrong direction and was supposed to be at the other side of the road 😱 Many runners only realised when the 2nd wave runners start catching up and running into our lane, opps, it’s we who ate running in their lane. 😂 And some parts of the route was just a narrow single car lane. It was still fine when I ran, but when the later waves runner ran in it, it seems super squeezy and difficult for faster runners to overtake as well.

There’s a very secluded road we ran pass which I felt wasn’t really nice, both sides of the road were parked with heavy vehicles such as buses and lorries. One of the bus engines was still running and it sorta gave me a mini heart attack. Though it was stationery at that moment but it still seems pretty dangerous.

As I have a marathon next month, I thought I could use this as a training run so I thought I’ll just run whatever I can and remember to breathe. Turns out my heart rate wasn’t bad and I had a happy run. I must admit that after 14km when we part different ways with the full marathon runners, I walked a lot 😂 But still the timing isn’t too slow and as while I was walking, my watch showed I was at 8 mins pace 😆 Didn’t know I could walk so fast 😆 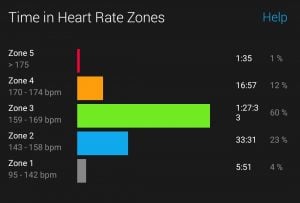 Ran pass some pubs at Kallang Wave Mall and Marina Bay Sands and realised it was still so lively and happening with music, usually when we ran pass in the early morning races, those pubs were closed already. It’s so much of jealousy when I saw the patrons so shiok drinking beer, playing pool and enjoying life while I’m here running and sweating profusely. The cigarettes smell was also damn strong around the area lah 😰

The route wasn’t completely shut off to the public, while we were running at Gardens by the Bay East and Marina Bay Sands area, many small ah bengs blasted music on their e-scooter, bicycle etc zooming pass and weaving in and out of us runners machiam they were Vin Diesel in fast and furious. I sincerely hope they will learn about the importance of safety before anything serious happens.

Some parts of the route was pretty dark which I was trying to focus on where I’m stepping and landing in case I could trip or sprain an ankle. Luckily I’m pretty familiar with most of the place we were running at. I’m sorry but sad to say, somewhere near 13km before Gardens by the Bay East I saw two young volunteers laying down flat on the floor looking at their phones machiam they were at camping and doesn’t look like bother at all. The first thing that comes to my mind was why volunteer in the first place? Or maybe the school give them certain points they need to graduate if they volunteered? 😅 I’m still very thankful to most of the volunteers I along the route.

I stopped at almost every hydration points for water and I guess that’s the reason I got a stitch. Drank too much water already 😂 Water isn’t cold and I actually expected that all hydration point would have both isotonic drink and water but lucky me, have water good enough already. Heard from some runners that the hydration points ran out of water and runners have to queue at public water cooler 😨 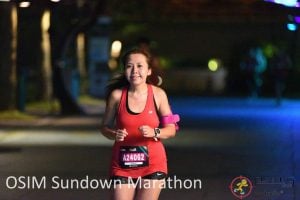 Love the medal as it’s pretty unique. Unfortunately and don’t know how, Eleanor had gotten a 10km medal instead of 21.1km medal which she runs in and she went to change 😕 Heng she realised its the wrong medal before we left. By the time Eleanor and I were ready to go home, we had a shocked at the Grab charges! It’s at a crazy $31 😰 we saw shuttle bus tickets sold out and the next shuttle bus available time slot left was only 4.30am which was still like another hour and a half more to go 😓 Luckily we didn’t purchased the shuttle bus tickets before hand as well. Heard that many runners missed their shuttle bus due to the delay in flag off. We decided to walk further out and try our luck hoping Grab would be cheaper. We were glad our legs didn’t failed us yet. We walked to Suntec but worst, it was still $31 but we could not even get a Grab after several tries 😂 Decided to flag down a taxi and the driver is super kind. We apologised for being sweaty and smelly but he said its OK ❤

Results and e-certificate were out the next day, you may find them Here 😊 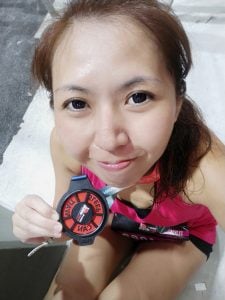 Though this year’s Sundown was quite disappointing to some runners, but overall to me it’s still alright. For a running fanatic like me, I would still sign up the race next year maybe 😊 It’s more of spending time with friends, making new memories. Life is not about just running, it’s about getting over things and stuffs and being someone kind and good. Life is about making lemonade out of lemons ❤