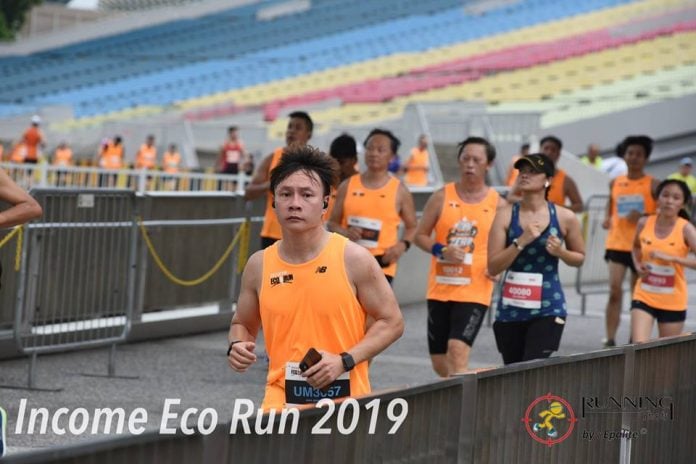 Three weeks ago, the last review was on the  2XU Compression Run.  A quick update: the race did have some hiccups as the official race results were not released due to some contractual fulfilment that was pending.  So it was 19 days later before the results were released.  This was a big deviation from the usual norm of 1-3 days.  But the results were accurate (at least based on my own comparison) contrary to some runners’ expressed fears.

Last week’s Good Friday through Saturday morning, I just completed my 86 km ultra challenge.  A lot of stuff happened in between but I will leave it for a later write-up if time permits.

The Eco Run race pack collection was swift.  These days, it felt like the number of participants have shrunk to some extent.  Perhaps there were too many events happening at the same time.  Maybe it’s worthwhile for some in the field to research into this.  I appreciated the efficiency of the race pack collection regardless, at F1 Pit two weeks before the race.  I opted to collect the essentials without the carrier so I had the singlet and bib handed to me in a neat bundle.  Participants could go the full zero waste ie skip the finisher medal and tee too.  I still wanted the medal for ‘commemoration’.  I didn’t have time to browse through the Farmer’s Market that day.  But the iconic ECO RUN stood out with the names of runners printed.

On race day, it was a subdued morning.  Dark.  It had rained on Saturday at my place (and the venue).  Start time was 5 am and as usual, this meant waking up at 3.30 am and so a short night again.  I had some family emergencies and a personal health scare the week before so I wasn’t too sure if I would be able to run this race.  Moreover after doing the 86 km – 20 loops round Bedok Reservoir overnight for the campaign I took up (https://singaporecancersociety.give.asia/campaign/run-86-km-for-singapore-cancer-society) I would still be in not so good state even if things had been normal the week before.  Please support if the cause resonates with you too – Thank You.

Still, I assessed the situation and decided that I would want to turn up still – I just hated DNS.  I had not been able to do any run in the week leading to the race. I could only muster enough energy to jog at slow pace of 8:44 min per km for 2 km before I had to stop on Friday evening.  Worst case: I would just have to walk and complete the race in 3 to 4 hours.  It seemed like I couldn’t really change my attitude towards some things.  Back in corporate days, I was given a strange title by my team/department – Never Say Die.  Caricature credit to ShenZo (神作) who was in my team in those days.  Perhaps some things never change somehow.

When I reached F1 Pit, it was fairly dark still but there was some music this time.  The first wave was flagged off on time at 5 am and about 10 minutes later, wave 2 was also flagged off.  I was taking it easy since there was no pressure to get PB.  I prayed for a peaceful run.  It was cool and calm.  The breeze wasn’t strong but it wasn’t humid.  A lot of turns but the route wasn’t pitch dark like the previous race I reviewed though we could do with some light in earlier part of the route.  And near the end, we also had to go up the slope of Marina Barrage and down but I didn’t feel the strain – it seemed to be over fairly fast.

I planned to go at average about 8.5 min pace but in the end I was able to keep below 8 min, even though I stopped for a pee break.  I took two energy gel this time round, at about 9 km and 15 km and stopping at almost every hydration point.  Enjoyed the run though there wasn’t much scenery as it was still early morning.  In the end I surprised myself by having another fairly fast half marathon, a minute faster than the previous half marathon though Garmin showed the distance to fall short of 21.1 km.

I collected my finisher tee and medal and went back immediately as I wanted to attend the morning exercise routine at my place at 9 am.  I just had enough time to have a quick shower and change of clothes before I went down again.  I was fairly surprised at my energy level.  Thank God.   Run happy.  Run Safe.

(Note: 1. The timing results were made readily available when I messaged on Monday afternoon – some folks had mentioned the results were available on same day. A few friends commented that the finisher tee looked nice.  2.  The cover photo’s credit is due to Running Shots.)