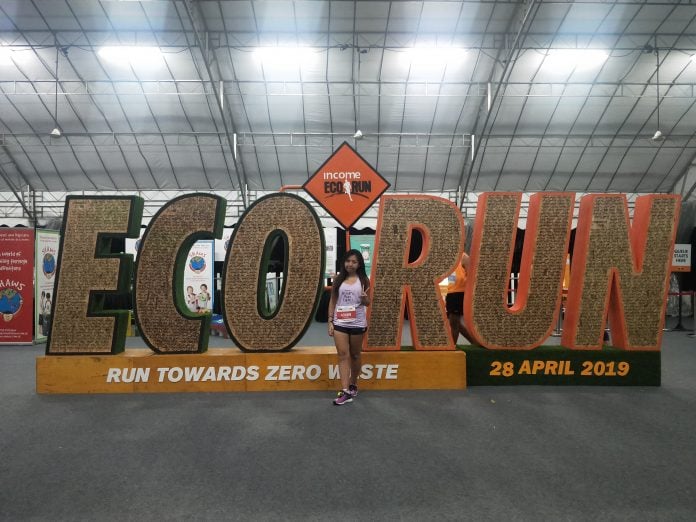 While most of my running friends were participating in the half marathon category, I participated in the 10km category this time as I had scheduled for a minor surgery just a little more than a week prior to the race. Doctor had adviced no running for 2 weeks, but I still registered for the race anyway as I thought if I’ve recovered earlier, I could run 10km as it sounds manageable but not half marathon as I do not want to risk my wound tearing up 😂 It’s quite interesting, while I was on the operating table, the nurse was concerned that my heart rate was a bit low and a few seconds later asked me if I’m a runner, I looked up and saw my pulse rate just about 50 😆

So prior to the race day on 29th April 2019 Sunday, I did a short run around my neighborhood to test water. The wound was already healing quite well, it’s a 2cm cut with disolvable stitches on. It’s still painful when pressed on, but while I run its just feels sort of “bouncing” or “pulling”. Yup, I thought it’s still manageable and so, I turned up on race day.

Income Eco Run is a run to raise awareness on environmental conservation and to encourage zero waste. It stands out than other runs because they have this zero waste runner option and categories so the runner can “say no” to finisher medal and finisher tee. I participated in the 10km category, it doesn’t have finisher tee but I still want my medal 😆 I try as much as I could to save the environment but I’m not extremist lah. Recently, I started to bring my own tumbler to buy drinks and dabao food without taking plastic spoons as I have brought my own spoon to use while at work. Bring own tupperware is another level up, I’m not ready yet 😂 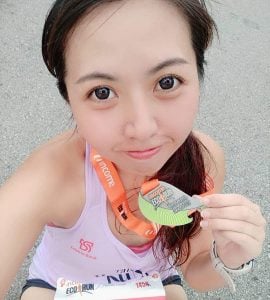 Flag off for 10km category was at 6.30am at F1 Pit Building and I arrived around 5.30am taking Grab Share that cost me $12. I would be pretty late already if I’m taking public transport. As Eleanor and I would be going back together after the run, I didn’t want to risk being late and be in later waves as we have leg massage plans and a date with Avengers in the later part of the day. Her half marathon category flags off at 5am and she would have finished the race long before I would.

Deposited my bag at the queueless counter and proceed directly to wait for the start pen to open. Once I entered the start pen, I sat down while waiting for the flag off. I’m like the only person who sat down in the start pen as I wasn’t feeling very good. It must be the anemia. I’m like a auntie looking to sit down whenever and wherever I can 😂 I felt so lonely as all my other running friends were running the half marathon category and here I am, sitting down alone waiting to run 😭

Anyway quite 😑😑😑 after so many years participating in Income Eco Run, now then I know there’s Union Member Category 😑 I would have saved like $10 or $20 more on registration fee per race.

Flag off was on time and I played music with my Phone from my playlist in YouTube, Starhub weekend free data ma 😆 Plus I needed the distraction because of the unwell feeling. I ran with no stress as I told myself I am still recovering from a surgery and I just run what I can and I did quite well with 1hr02mins. Results out damn fast just few hours after the race. 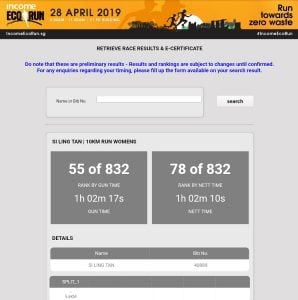 Though I was running by feel, I tried to stay in front of the 1hr pacers, but I slowed down a lot after the Stadium and they soon overtook me. Distance marker was available at each km accurately, tallying with my sports watch. 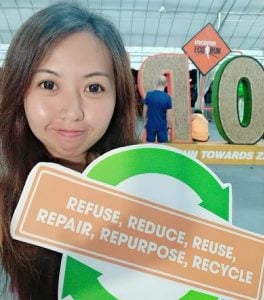 There’s quite a few hydration points along the route but I only stopped at 2 of them for water. At the end of the hydration points were big bottles of water for those Zero Waste runner to refill their cups and bottles. I could usually run 10km without any water like a camel but I still considered myself as a patient. I needed that 100 Plus and I needed to keep myself hydrated 😊

After my run, I went to get my my medal and didn’t take that banana because I don’t usually eat banana(only Banana Prata and Goreng Pisang the unhealthy version 😂) unless it’s a full marathon and I needed something for energy. It must be one of the quotes I read on one of the distance board. Buy only what you need. I don’t eat, I don’t take even if it’s free.