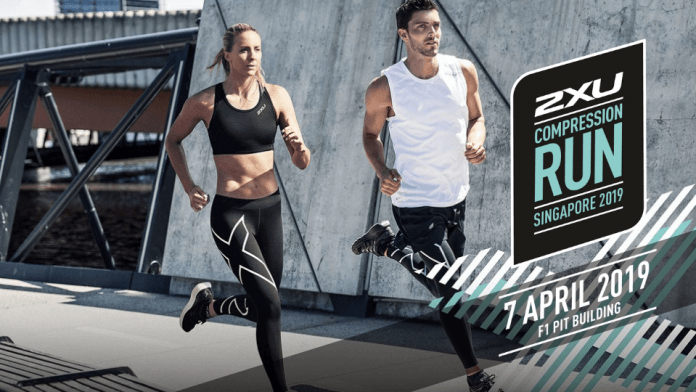 It was my 3rd Edition really, but the 1st was a 10km run, and just got in love with 2XU Compression Run after. Also, this is my first blog post since I started my journey of running.

I remembered my first 10km run was great, although my friend who run the HM mentioned it was dark and congested. But decided to give it a try when 2018 version comes on, and never look back since.

So 2019 version, as always, looking forward to it. Date of event is perfect this year, firstly without clashing with the Chinese Qingming festival, which Chinese will normally go to offer praying to their ancestors, and secondly, the weather is turning cooler after months of hot weather.

Race pack collection day, wanted to collect it on Friday night, as I was having dinner with friends, thought will be good to do both at the same time, however, it proved impossible, as I supposed people working around that area tends to also collect it on Friday night, and the queue was impossible, so I went back eagerly on the second day, Saturday to collect instead, which was a breeze, I collected within 5mins I suppose?

Nothing to be excited about, just race bibs and their new material for their running tee which they claim was good for preventing odour. I tried on the very next day for my short run, it doesn’t smell, but it sticks to you, so I don’t really like it. Any case, i like to wear my own running tee, just so I can spot myself easier when finding my photos through the throngs of picture taken by their engaged photographer later on. Hahaha, pick up this “trick” when I was reading other’s people blog, can’t credit the person as i read this quite sometimes back.

So comes the actual day, decided to take bus this time round, instead of driving or taking cab, which I kind of glad that i did, but also disappointed. Glad because I do not need to bother about carparking, road closure, timing, dropping right in front of the running village etc, disappointed because the bus left late at about 3.30am instead of 3.20am? After departing, we were stuck in various jams, geylang area, and the junction turning into golden mile, in the end, I arrive probably around 4.05am? My friend who was waiting, I asked him to go ahead first. So anyway, I will probably want to take bus the next time round, it is too convenient and hassle free.

So with taking of bus, I need the baggage drop off, which was hassle free as well. No complains, the area to deposit can be found easily as well. And you can go straight to start off point after depositing.

At the start point, I probably waited for 30mins before I get flagged off, would be good if they can indicate the wave that we will be in, so we have more clarity. It was only until I got to front, that they mentioned we are the last wave.

So the runs begin! Yeah! Was at the front of the wave, so I was able to run off straight away, which was good, then it comes the first tunnel that we went through, it was so dark, there is no lighting or whatsoever, but this probably is LTA issue, not theirs. But further down, we were passing by some dark area along the river, with lights hanging on the pole sides, which I thought could be better? It blinded me somehow, and I thought hanging from the top could have been better for us. But in any case, was a short distance, so I just bite it through. The rest of the run was ok, just for the every u-turn point that I saw, I always tend to lose my morale, I just hated all the u-turn point, looking at runners who have completed the u-turn, and I am just about to get it started, without knowing how long more to the u-turn point! How I wish at every u-turn point, they will let us know how long to the u-turn point! Am I the only one who has this issue?? haha. But luckily all the u-turn point are quite short.

So everything was cool, sun was not out until the later part, but was bearable, problem came at the 19km-20km distance where my calves began to feel the cramp, I was just praying that I can last through the distance without cramping! I was telling myself I just want to complete the race without injuries, as I only started proper preparation in the mid of Feb, when I should have started in Dec, but because of the festivities going on.

Collection of medals and finisher tee was efficient and clear.

In the end, I completed without any injuries, and bettered my PB, with 2hr 24mins on my trusted running app. My last run was 2hr, 33min. YEAH!! surprising even for me!

So some lesson/advice learnt and to be shared:

Overall, I will say this is a good run, organization is good, except for the things that i have mentioned. It is I believed one of the most anticipated runs, and also one of the better run organizer. I have read horror story even right from the race pack collection. So I will still be back for the next for sure!!

I think 20km is very achievable, there will be pain no doubt, but it is not as hard as it seems to be, as long as you put in the effort! So, I hope this will help inspire more people to start running!