Okinawa, a Japanese prefecture comprising more than 150 islands south of the Japan mainland. It is known for its tropical climate, beaches and World War II sites. On the main island, also known as Okinawa, they have been holding a not so commonly known race named Okinawa Marathon for the past 26 years. And this year, we decided to take part in the 27th edition.

Registering for the marathon was pretty straightforward and at 6000 Yen, it is one of the cheapest marathons in Japan (Tokyo Marathon was 12800 Yen). Less than a week before the race I received the number card collection letter which I will need for my BIB collection before the race. However she did not receive hers up till the day we depart. So we just brought along her email confirmation slip. 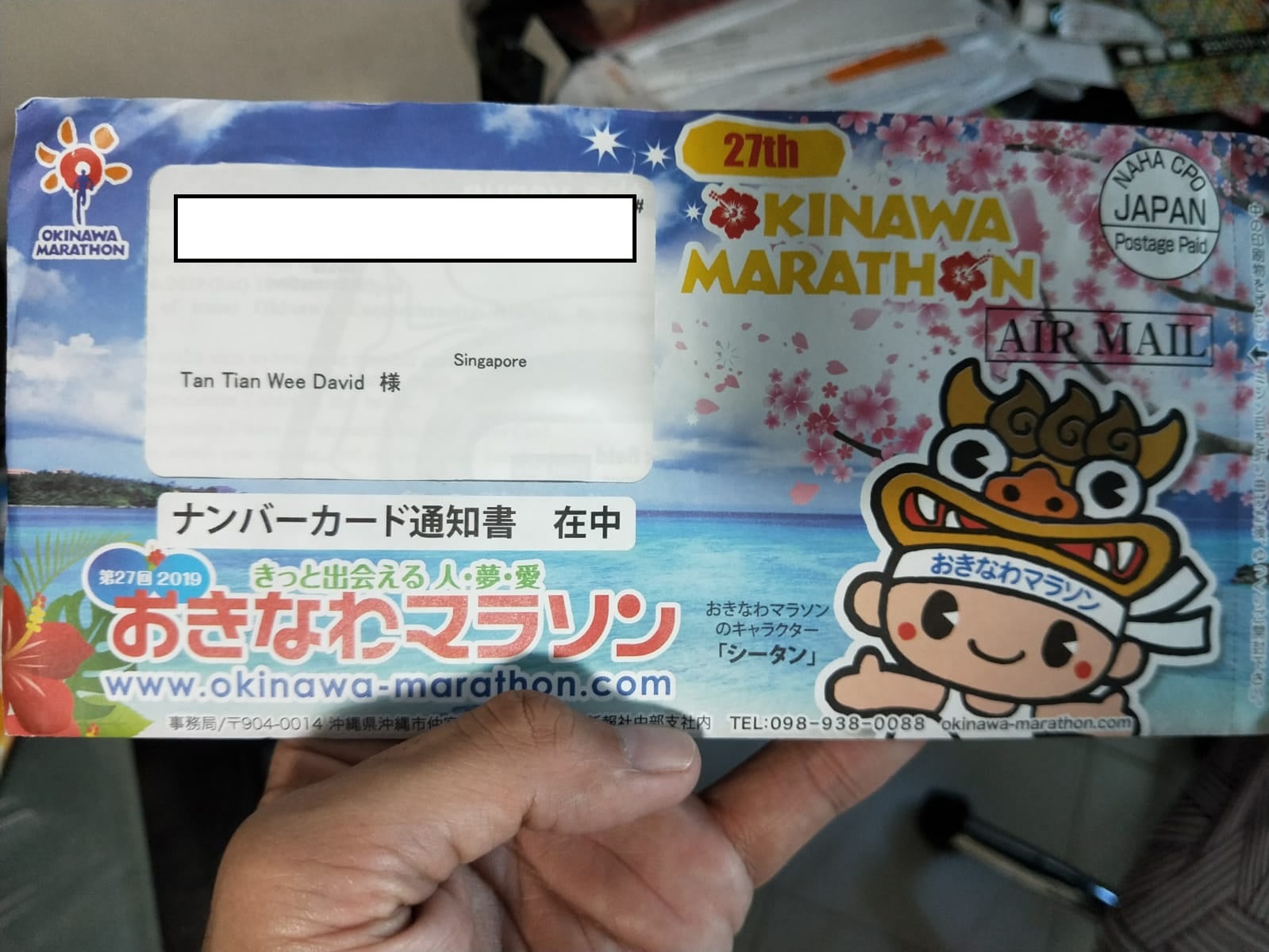 BIB collection was done at the Okinawa Comprehensive Athletics Park, which was also the race site itself. As this is not one of the bigger marathons around, there was no large scale Expo like those we have seen in Tokyo. There were just a couple of stalls peddling pretty much anything one may need in a race. 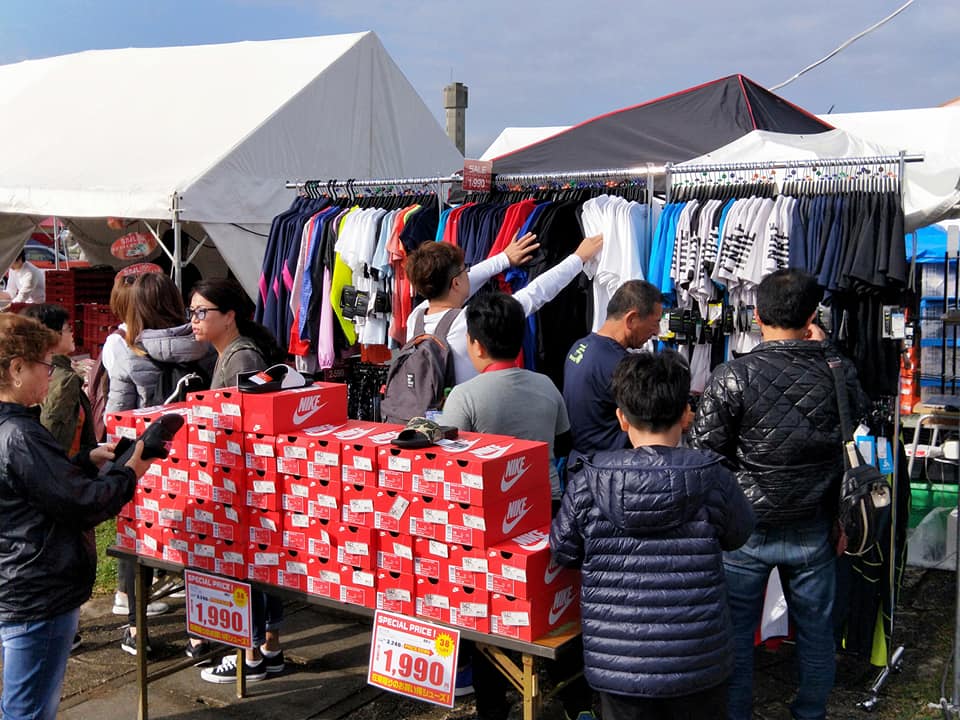 BIB collection was a breeze. The number card collection letter would have stated our BIB number already. So we just needed to go the counter labelled with our BIB numbers to collect our BIBs. After which we needed to go to another counter to collect our event tees. As she did not receive the number card, she had to go to another counter to get her BIB number before collecting her BIBs and event tee but the whole process took no more than 10mins still.

Flag off was at 0900hrs, so we left our hotel at around 0630hrs and made our way to AEON Mall Okinawa Rycom. That was where we parked our car and boarded their free shuttle bus to the race site. Shuttle bus organisation was pretty efficient as buses after buses arrived to pick up the runners. We managed to reach the race site around 0730hrs and we headed straight to the loo first.

Based on past videos of the race we have seen, we were prepared for a pretty warm run as there seemed to be sun in every video we saw. The course also consisted of a couple of ‘gently’ rolling hills, something the organisers made very clear to us in their marathon description.

At around 0830hrs we started to walk to our starting Pen which was Pen B. There were 7 Pens from Pen A to Pen G and we were allocated our Pens based on our past marathon finishing times. There were no flag off waves as all were scheduled to start together at 0900hrs albeit from front to back since there were not that many runners.

The marathon has a cut off time of 6hrs 15mins though the official cut off time was stated as 6hrs. Guess the extra 15mins was catered as allowance for the runners at the later Pens. It also had a couple of water stations with individual cut off times. We decided again to take it real easy as the timings were quite lenient and we should have no problems clearing them anyway.

As with Japan marathons, the support from the locals were amazing. They were everywhere and anywhere cheering us on and offering us drinks/snacks. Even the kids were so enthusiastic always stretching out their hands for Hi-5s.

Unfortunately the same cannot be said of the official water stations. There were no sports drinks even up till 10km and all they had were just water. The first sports drink were only spotted around the 15km mark and subsequently they were few and far between. We were fortunate that the locals were also feeding us with snacks and drinks if not we would have been very energy deprived.

I must say the high point of the marathon came at the 28.9km mark, which was when we entered the US Air Force Base, Kadena Air Base. The Americans were a crazy yet uber friendly bunch. From the moment we stepped into the base till we left it, they were screaming and shouting at us, offering us drinks and snacks, jumping up and down, waving, basically doing whatever they could to keep our spirits high. It was an enjoyable and amusing 3km in the air base.

The ‘gently’ rolling hills started after 10km and continued almost till the end. They were not kidding when they said hills are aplenty. So we fell back on the usual up walk, flat and down run routine.

The weather was surprisingly chilly and not warmth as we expected. The unexpected chill might have contributed to the large number of runners suffering cramps along the way as we kept seeing runners stretching out their legs along the 42.195km. Fortunately muscle sprays were aplenty as well and runners kept spraying and spraying along the way.

Another thing I noticed was the absence of large number of portaloos. It was not that these were not catered for but the organisers went one better and tied up with the numerous convenient stores along the way that allowed runners to use their proper toilets. Toilet signs can be clearly seen along the way indicating which convenient stores had opened up their toilets for us. Do note those without the toilet signs outside do not allow runners usage though.

Finally at around 1440hrs, we enter the Athletics Park area and entered the stadium before completing our Okinawa Marathon after 1 round round the track.

Finisher certificates were printed out upon us leaving the track. They just scanned the QR Code on our BIB and viola, certificates were ready and handed to us. Right after we were awarded our medals with the volunteers hanging them over our necks. Took a Coke before taking a short rest before we went for a final show.

Cut off time for the marathon was 1515hrs. Having seen numerous videos of Japanese marathons closing the gates right in the runners’ faces, we decided to witness this first hand. At 1510hrs we could see the marshalls forming up right before the stadium gates cheering runners as they returned. And at 1515hrs sharp, the marshalls formed a human chain and started to block the path leading into the stadium with the stadium gates closing as well. We then saw 2 girls slowly walking towards the gate on seeing the closure. They did not make a scene but they did seem a little embarrassed about it as they kept covering their faces and laughing. So the legendary strict gate closures are true afterall.

It was generally an enjoyable marathon despite the ‘gently’ rolling hills and anyone thinking of coming here should be sufficiently prepared for them. Not as scenic as we would have liked but it was better than Tokyo. Official food and hydration support could have been better but if the unofficial ones were always this fantastic, I guess they will suffice. 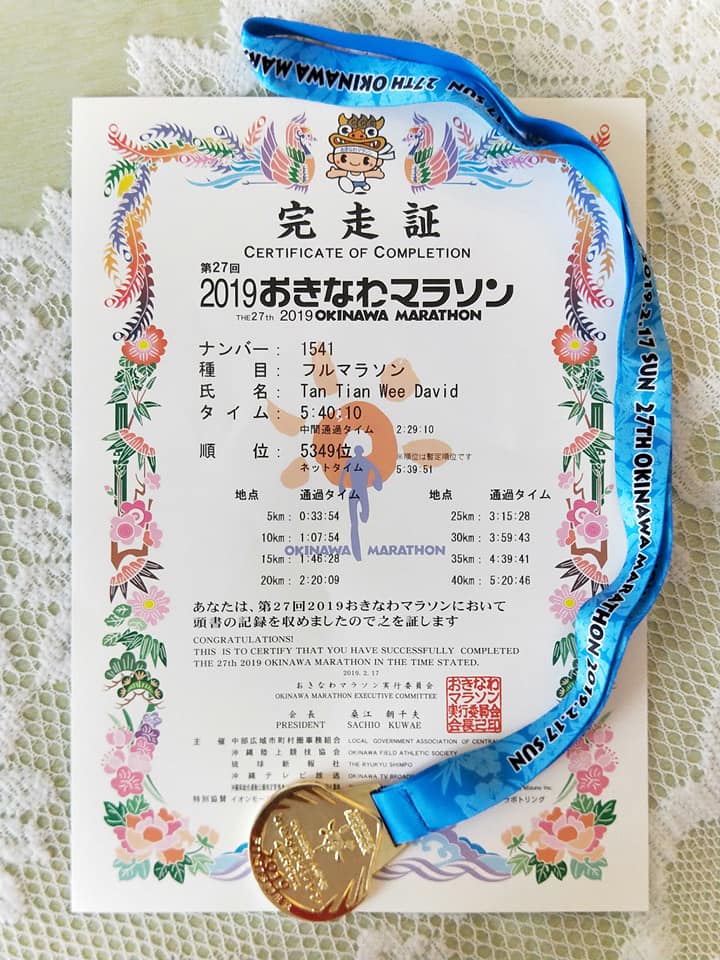 Oh. And we did get our Blue Seal ice cream.