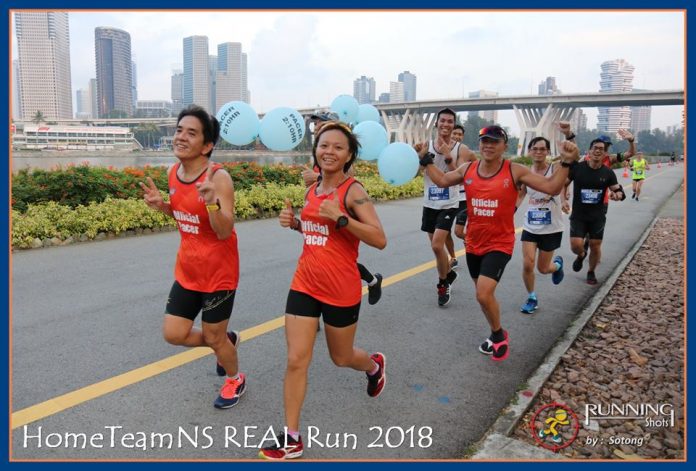 One week after TPS, 21 Aug,  I was back at The Meadow, Gardens By the Bay.  Coincidentally, this seemed like a rehearsal for me.  The Saturday before I was at Gardens by the Bay for YOLO and then Sunday for TPS at East Coast, both 10 km races.  This time the half marathon route of HomeTeamNS Real Run will bring me from Gardens by the Bay (Meadow) through East Coast and then back. 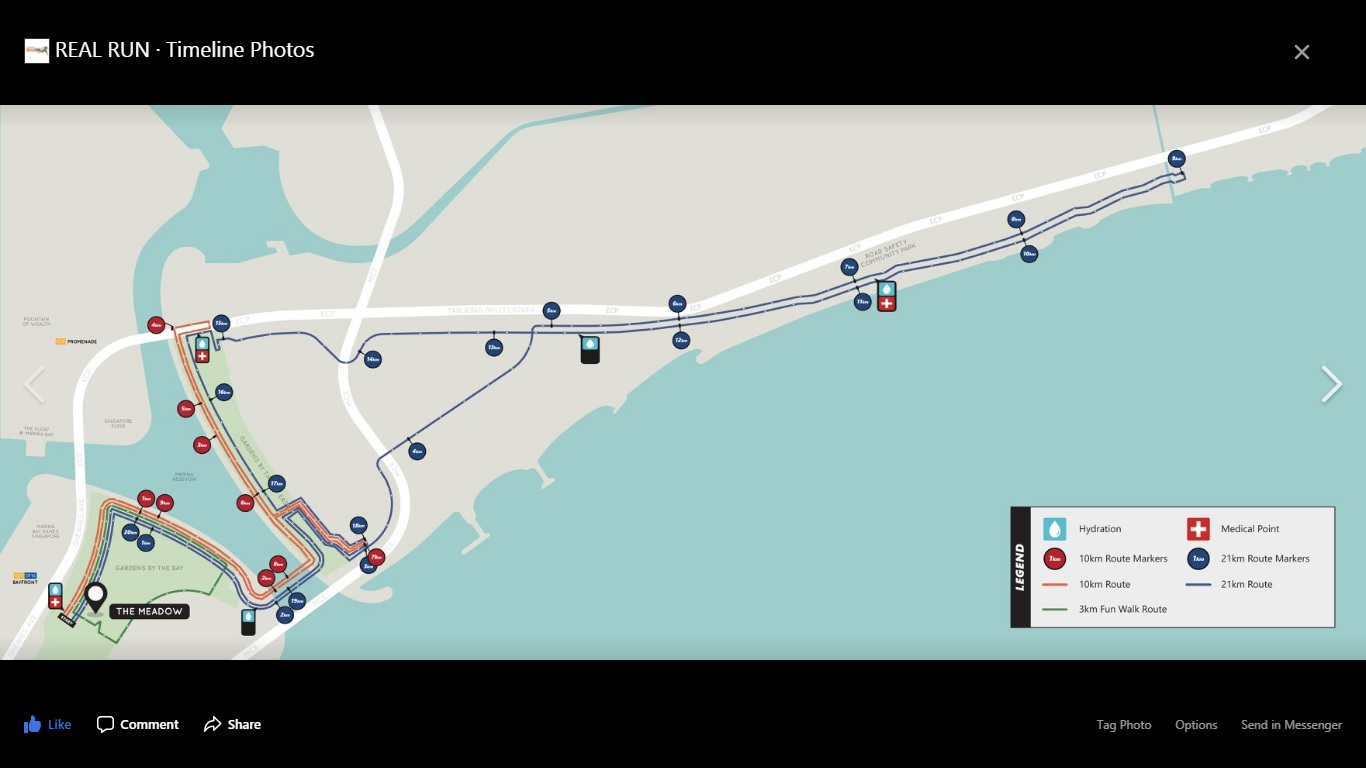 I have a free slot from JustRunLah! (Thank You!) for this half marathon race.  This complimentary slot has not affected my evaluation and if anything, I took every race seriously, paid or unpaid.  My philosophy is simple – given my age and my amateurish status as a runner, I only want to improve and if in the process, I could share and motivate one more person to take up running or run better, I’m inspired myself.

Back to the race: the race pack collection again saw me completing within 5 minutes, no queue.  I believe this is the new trend – 3 races in a row that I just walked in and collected the race pack right away and not seeing any others at the queue.  Or this is month of October, Halloween and folks don’t come out in crowds ?

Jokes aside, I thought I would share what I did before this half marathon after a few months’ of inactivity.  Looking back at my Garmin, I did a total of 38.2 and 28.86 km respectively in August and September, doing up to max of 10 km (13 km once) but usually between 3.5 to 4.3 km.  By October, I had stepped up to just under 100 km before the half marathon without a real intensive plan.  As I didn’t want to aggravate my back injury, I just went on short runs usually between 3.5 to 4.3 km.  I did squeeze in a 13 km distance though I’ve remembered wrongly as 12 km mentioned in the previous blog.

So as I started to go into the week of race, I was back to just doing short runs.  Perhaps less is more.  One thing though different since March of this year, had been that I was hitting the target of walking at least 13500 steps each day.  This was in conjunction with a paid research programme and I was one of the guinea pigs.  If I am able to keep up a week of meeting the target of 13500 steps per day then I would be paid $14 each week.  But it is drastically reduced should I miss by a day, in other words it has to be consecutive days without breaks – a break would reset the count.  In the process, I find that walking is a good way to keep the body active.  As this had become a habit, I took it as allowance for just being able to move.  Not too bad ! (?)  I was quite surprised recently when I saw all the other participants who turned up for the follow-up survey recently, were young working men!  Do they really need the incentives to exercise?

Anyway, after Sunday’s TPS, I ran on Tuesday – 1 km repeated twice, Wednesday – 4.4 km, Thursday 2.1 km, then 3 km. So rest days were Monday and Friday, Saturday.  When race day – Sunday morning came, 45 minutes before 5.30 am I was at The Meadow start line once again.  This time, there wasn’t any rain.  It was humid and the air was still.  As I waited, some folks tried to make their way towards the front of the start line.  These are probably the faster runners and I recognized one of them as a fellow blogger.  I stood aside to let them pass.  I recognized faces more from either reading the blogs posted or had seen them in previous races.  After a while you tend to know who is who (by face, maybe not by name) in races.  They didn’t know me which was good.

I am common Joe, there to run against myself.  I was hoping to stick to an average pace of 7.5 min/km making it just 2:38 which was my usual finishing time before injury.  Break 2:40 was my mission, my focus for this race, possibly the last half marathon this year (number 13th half marathon).

On flagoff, I started the Garmin as I got past the start line.  I felt stiff and the windless humid weather didn’t help.  After about 1 km, I glanced at my watch and thought I saw close to 8 min pace.  I thought this was not too good.  I fastened my pace but at the same time, I felt heavy.  I tried to pace by feel after that.  I skipped the hydration stops the first 10 km.  It felt more windy only when we got to East Coast.  Still, luckily it was early morning and there was no sun.

I kept reminding myself to keep a certain momentum regardless of what the watch was telling me.   Other than the initial stiffness in the back, I felt fine after the first few km of warm up.  Then towards the end, I could feel a drain on my energy level.  I had taken a packet of energy gel at the beginning and then near the 10 km hydration point.  After 10 km,  I allowed myself a quick cup of Pocari Sweat at each hydration point till the end.

I felt myself slowing down with just 3 km to go.  Then I kept up the pace with as much energy as I could muster for the last 2 km.  There was no bottleneck and probably also because I was in wave 1 there was no unnecessary obstruction of any kind.  Got myself shot by both Runcapture and Running Shots (Sotong) at the race.  Missed my running friend/photographer Terence as I was too ‘spent’ at that point to call out in advance and wanted to get to my target set from start.

Was happy to complete with average pace of 7:30 and better.   It was quite a stretch of a few hundred metres to the medal collection for this race.  Still, I thought it worked out fine as runners took time to cool down and this helped to distribute the crowd of runners coming in at the more ‘popular’ time.

In the end the official net time showed a PB for me post-injury, it was probably the second best time I have for a half marathon – 2:34:56.  This was a good time to beat for the next half marathon target should I be up to it.

Mission accomplished for this race.  The race was well organized and reasonably efficient in logistics.  The medal was one of the better-designed ones this year (other runners’ comments besides mine).  Hydration was adequate and volunteers were superb as usual.

The next run would usually be classified as a fun run.  It is the Lunghi Run but it was held this year in memory of Ali Akbar, the founder who had passed away due to cancer recently.  I have no plans at this point to write about it, as I thought I would just go for a quiet run for this man whom I got to know better only just last year, because of the Lunghi Run itself.  We shall see, in the meantime, run safe and run happy.

Photo Credits to Running Shots and Runcapture, thank you for being always there.

(Parting Notes: just wondering if I should also Break 6 this year or next – more in next blog perhaps…)