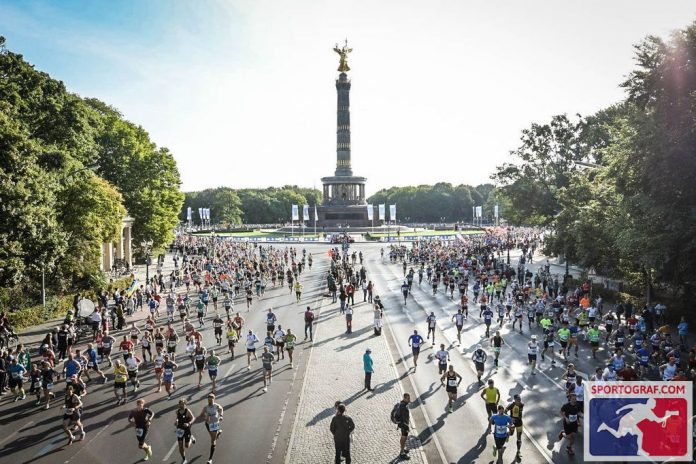 This is the 2nd Major in my life.  I balloted this race for 2 years, and last year because of the extra 1000 charity slots which opened up later at a first come first serve basis.  The entry free is the same at 108 euros.

Held at the Airport Tempelhof (Platz der Luftbrücke 5, 12101 Berlin) .  Named the Berlin Vital Expo, just to collect the race pack, 3 large halls of sports items on display and sales, at the same time the last hall for the bib collection is only accessible to registered runners for the bibs to be printed and collected.

The race pack consisted of a recycling bag with the bib and brochures, there is also a small Addidas shower gel and deodorant.  Participants can collect their event tee shirt and finisher tee shirt here, if they have purchased online.

Physiotherapy services and also other race promoters, the Berlin Marathon race expo is dazzling.  With BMW and also Addidas as main sponsors, there were also display of the BMW cars, there was even a hot air ballon with BMW logo at the air field. 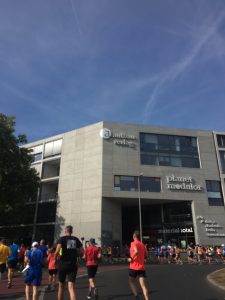 Berlin Marathon 2018 is the 45th Edition.  This race is known for its flat course, good weather, this year the world record was broken.  After leaving the famous Brandenburg Gate, runners will pass Charlottenburg and around Tiergarten.  Winding through along Moabit and Mitte and then towards the south at Friedrichshain.  The other places that runners will go through are Kreuzberg, Neukolln, Schoneberg, Friedenau and Zehlendorf.

The long walk from the PostDame U Bahn station, you will experience the major marathon atmosphere right from the station all the way to the start point.  This year there are about 40 thousand participants.  Broken up into 8 waves with only 1 distance to cover and that is the full Marathon at IAAF gold standard.

Replenishment wise, the route was filled with the water stations as indicated on the route map.  They are all well stocked with water, energy drinks and the various replenishments at some stations.  Some points have banana and apples and along the way some volunteers will just set up their own booth to cheer you on.

Choke points are experienced for a sub four to four thirty runner, at the water and replenishment points because this is the speed that the majority of the runners are running at.  It can get a bit rowdy and messy.  I do not know why the organiser chose to have plastic cups instead of paper cups which are much more environmental friendly.  The plastic cups makes a lot of sounds and causes the ground to be slippery.

This year Addidas tried to do a hold your own cup campaign and gave many runners a resuable running drink cup to get your water.  I felt this was a good idea towards environmentally friendly mindset.

Sprotograf was the official photographer assigned for this race.  They usually take photos from the raised mobile elevator parked at the road side to capture the running shots.  But most of the shots will show you with many other people running together as there are just too many of them.

Just when you think turning back to Tiergarten means straight through the Bradenburg Tor, you will realise that there is a short of 1Km plus and you need to make a longer way back before you cross the gate.  This was the point that many runners started to walk or feel the cramp.  The finishing is actually quite spectacular and the moment you receive the medal is really very fulfilling.

The ending point is another massive area with runners constantly coming in, you just have to keep moving till you are back in the race village.  Here you can take your bag drop items, or if you ordered a poncho, you can collect it here to keep you warm.

There are, of course, beer counters to quench your thirst, unfortunately the beer is all alcohol-free.  But it is definitely refreshing.  Besides the medal, runners also get a special bag of food replenishment which include a bread, some pretzels, energy bar and banana. They come packed in a plastic bag.

You can also collect and print your results, get your medal engraved too.

Although I did not get the timing that I wanted for, it was good to know that Eliud Kipchoge has broken a record f 2:01:39 in this race.  Really feel honoured to be part of it.  If you can wait for balloting, do give this race a shot, if not you can also join a tour group which offers the bib and travelling to Berlin!