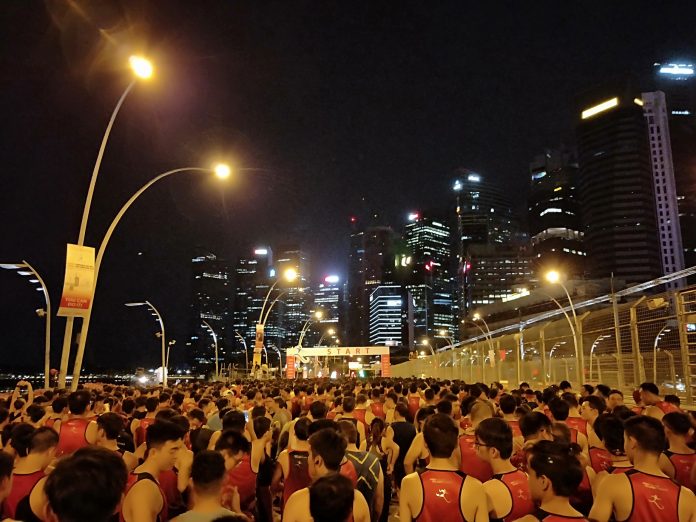 Over 41000 runners participated in this year’s SAFRA Singapore bay run and army half marathon (also known as AHM). This race serves an opportunity where I meet up with 4 of my colleagues after I had left my company on 17th Aug to pursue further studies in SIT (Singapore Institute of Technology). In case you are curious, I’m pursing a degree in Electrical power engineering. My school will commence on 3rd Sept. That means I have a break from 17th Aug to 3rd Sept 2018. I went for the SIT orientation camp which was held from 23rd Aug to 25th Aug 2018. From this orientation camp, I had a fun time making new friends and playing team-building games but at the same time having a lack of sleep. By the time it ends, I was feeling super sleepy that I didn’t even celebrate my birthday on the 25th Aug.

I slept at 7pm but I had interrupted sleep. I woke up and went back to sleep again. When I finally woke up at 3am, I took grab taxi from my home to the race village. It took me 3 attempts to successfully book a taxi through the grab app. By the time I board the taxi, I was already 4am! When I arrived at the race village, the first thing I looked out for is the baggage deposit counter. Bag deposit was very quick and easy. It was only when I proceeded to the start pen after depositing my baggage that I met all of my colleagues. We didn’t talk much as we were already late. 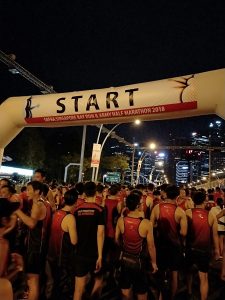 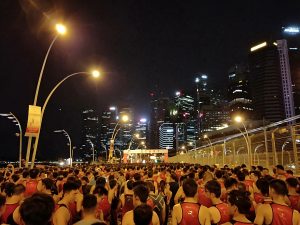 There were 2 start points as shown in the pictures above. We were all in the 3rd wave which flagged of at 5am. We went our own separate ways as everyone run at different pace. As for me, I try to run slow for the first 2km at a speed of about 7km/h and hoping that I won’t suffer during the later stages of the race. after that, I speed up just a little but I told myself to limit my speed to below 9km/h. I still managed to run almost continuously stopping only at hydration points. The queue for the hydration points were long especially for the 100plus isotonic drink. It seems like 100plus were so popular that one of the hydration station that I came across ran out of it. 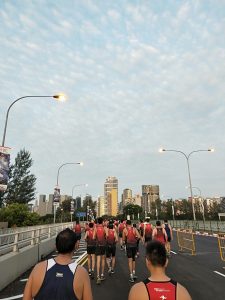 By the time I reached the 16km mark, 2 hours had passed ever since I started the race. I felt that I was a little too slow. At that point of time, I tried to increase my running speed because my legs and stamina were still strong enough to run even at that point. So I aimed to walk less and run more. I ran and endured the last few kilometers as my legs were very sore but not cramping at all. In the end, I achieved a time of 2hours 37minutes for this half marathon without consuming any energy gels. 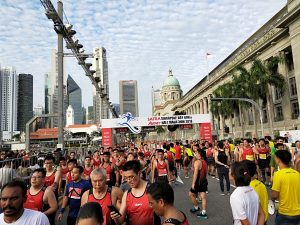 I thought to myself that I could only make it for a consistent pace (even split) for at least 14km. Even though this was my slowest half marathon, I’m glad that I had ran for most of the distance and still finish the race without suffering from any muscle cramps. Now I’m glad to say that I had finished this half marathon stronger than ever before. 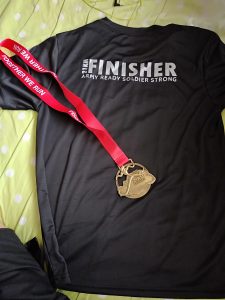