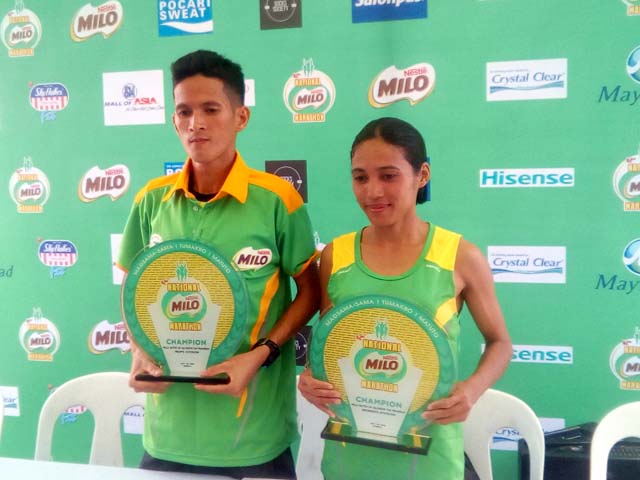 PASAY CITY – A former champion and a new face stole the scene from almost 28,000 runners at the conclusion of the 42nd National MILO Marathon Metro Manila qualifiers Sunday at the SM Mall of Asia grounds.  Amidst the sporadic downpours, Jeson Agravante and Christina Hallasgo brought home the championships of their respective divisions in the full marathon and will lead the Big City delegation to the National Finals set for December 9, 2018 in Laoag City, Ilocos Norte.

Agravante entered the race with the mindset of getting back the MILO King title he won in 2016 in Iloilo City but lost it last year in Cebu City to surprise winner Jeorge Andrade.  The Silay City, Negros Occidental native also won the Metro Manila qualifier in 2012 but suddenly went on a two-year hiatus from running but he has indeed returned with aplomb.

He literally flew and built an over one-kilometer gap with the chase pack upon hitting Gil Puyat Avenue from Fort Bonifacio for the final push back to MOA.  Agravante finished the 42.195-kilometer course in 2:35:10, seven minutes faster than runner-up Eric Paniqui (2:42:41) and third placer Bryan Quinco (2:43:59).

Hallasgo from Malaybalay City, Bukidnon may be an unknown quantity nationally but she is a star in the Mindanao running scene.  She is a back-to-back MILO Cagayan de Oro champion from 2014 to 2015 and took a break in 2016 to give birth to her first child but returned immediately to rule MILO Butuan last season.

The next MILO qualifier will be hosted by Tarlac City on August 26.  The cities of Batangas (September 16) and Lucena (September 30) will next take their turn before the caravan moves to the Visayas and Mindanao for more races.