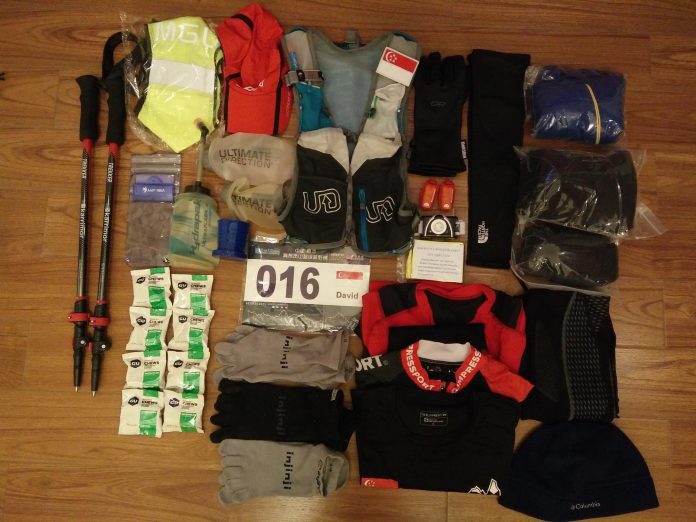 Know this might sound pretty straightforward. If the items are listed as mandatory, they must be brought along right? Well, apparently not all runners think so. Here I will give my personal take on the matter.

There are many reasons organisers do that, though more often than not, it is for safety reasons. If runners are expected to be on the trails into the night, a headlamp with spare batteries would be an absolute must. Some organisers might even need you to be equipped with 2 headlamps for the purpose of redundancy in case your headlamp fails you en route. If running on public road at night is expected, a reflective vest with a blinker light may be in order.

Depending on the distances between each water stations, organisers would also dictate your water carrying capacity for your hydration. They wouldn’t want you to run out of water midway.

Other items like mylar emergency blankets, whistles, waterproof jackets, a mobile phone with network are pretty standard as well. With more races going Green now, you may be required to bring along your own cup, which is usually used for you to consume hot beverages especially during cold weather. Bowls, spoon or fork may also be needed if the organisers serve hot soup or food at their water stations.

After listing down the above, it would seem logical to bring them along. So why do some runners prefer not to follow the mandatory list?

Why runners choose to leave out some ‘mandatory’ items

“I do not eat during my run, why do I need a bowl/fork/spoon?”

“I run fast enough to be back before nightfall, so I do not need headlamps.”

“I am not afraid of cold, so I will never need an emergency blanket.”

Basically these runners find these items troublesome, cumbersome and adds on to their already heavy load. So what they usually do is to leave out what they feel they do not need. Or perhaps remove them after the mandatory gear inspection because some races do not check their gear again after the race starts. If organisers are not aware of what they had done, the runners will gladly complete their races with a lesser load than mandated.

It is smart for the runners to circumvent the rules this way right? Afterall, no harm’s done.

No. It is not right

When runners registered for races, they know what they are signing up for. From the distance, to the elevations to the terrain, and, the mandatory gear list. So to not bring along all that are mandated is akin to, cheating in my humble opinion. It is like say, I know this route has a shortcut to the next water point, so I take the shortcut. Organisers do not get to know, nobody gets hurt, I complete my race. Does that sound right? Safety aspects not withstanding, what is the difference between cutting short a route and cutting short your mandatory gear list? They both amount to the same principle of not adhering to the rules. No?

Some races conduct random checks on runners during the races and if runners are found to have lesser gear than what they are supposed to have, they will be penalized or may even get a DQ (disqualification). But from my own personal experience, such checks are far and few between (I have only been checked once in over 10 ultra trail races). Which is why some runners took the decision not to have all their gear with them because they know chances of them getting checked are low. Based on this logic, is it alright to cheat during an examination if you know chances of you getting caught is low?

There is no right or wrong as every runner is responsible for their own actions. But for me, I would rather complete a race (or DNF) knowing I had done it legitimately bringing along all that was mandated. And not complete a race knowing I only had 90% of what was required with me because for me, that is not a completion.